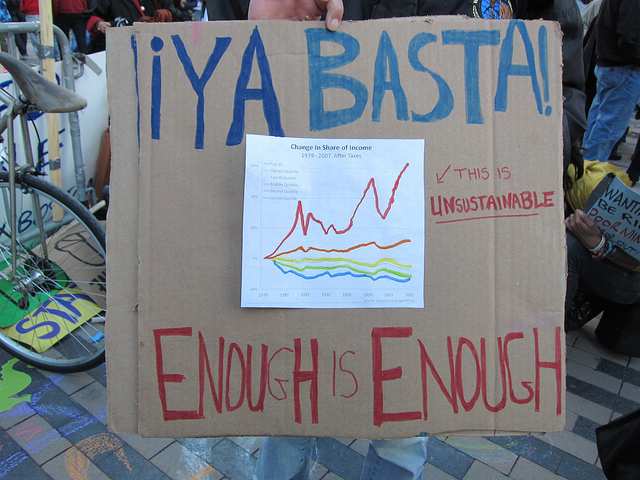 Democrats hurt their cause by not making an alternative case—the case for equality—with much conviction. (sharonkubo/ Flickr)

How Inequality Guts Democracy, Suppresses the Vote And Keeps the GOP in Power

"The people who stand to benefit the most from a Democratic agenda are also the most financially insecure and alienated from the system, and thus the least inclined to vote. It’s a vicious cycle: more cynicism, more inequality, more power flowing toward the GOP."

Two days after the election, I ran into a friend who supports himself with Social Security and part-time work as an apartment building maintenance man. I asked whether he'd voted. No, he said, not since 1968. Voting is like the busywork they give kids, he said. Crayons and coloring paper. They let us have an election to keep us occupied—pat us on the head, tell us what good children we are, admire the pretty pictures we've drawn. Then they do as they please.

It’s common to hear variations on this theme across the political spectrum—the game is rigged! Both Bernie Sanders and Donald Trump called out international trade deals as one culprit. Trump often added the media and the government, among other villains, and Sanders cited tax cuts for the wealthy and the influence of corporations and corporate money in politics. Most Americans agree. A 2014 survey by the Pew Research Center found that 78 percent supported the idea that “too much power is concentrated in [the] hands of [a] few large companies.”

But my friend expressed something different, something deeper, when he compared our elections to crayons and coloring paper. He put his finger on the corruption at the very root of our system: People who feel marginalized don’t participate in a system that they feel shut out of. Or, said a different way: Poor people don’t vote. They don’t see the point.

The relationship between security and voting

Pew released a report last year that showed the depth of the divide between the financially secure and the insecure when it comes to voting. For example, it looked at whether a person had a savings account and retirement savings, or borrowed money recently from family and friends. Pew divided the public into five groups—25 percent falling into the most financially secure category, and 20 percent into the least secure.

The GOP’s efforts to keep the Democrats’ base away from the polls has been a major story over the past few years and rightly so. The creation of new voter ID laws and the reduction of polling places in minority neighborhoods—these and other efforts are elements of an overall strategy to erect barriers to the voting booth. And the strategy seems to have worked, especially in key swing states. As Ari Berman reported in The Nation, “turnout in Wisconsin was at its lowest level in 20 years and fell by 52,000 in Milwaukee, where 70 percent of the state’s African-American population lives.” Hillary Clinton lost the state by some 27,000 votes.

One of the GOP’s most effective and under-the-radar tools for suppressing the vote, though, isn’t aimed directly at voting. It’s the collection of policies that benefit those who are already financially secure, like tax cuts, and increase the stresses and insecurities that buffet the financially insecure, like cuts to social programs.

There is a tragic irony in all of this.

Trump won the presidency primarily through his influence on the Democratic base. Clinton’s loss was partly a matter of the white working class voting Republican in higher numbers than usual. But it was also a matter of a deflated base not showing up in strong numbers. Trump got roughly 61 million votes, which was more than the previous two GOP candidates. By contrast, Clinton underperformed Barack Obama’s campaign in 2008, when he won more than 69 million votes, and his campaign in 2012, when he got nearly 66 million votes. Clinton’s total was about 62 million.

Trump outperformed John McCain and Mitt Romney in part by promising to restore American greatness. That slogan played primarily to the more affluent members of the GOP base, who are deeply invested in the system and believe their vote and their voice actually matter. Meanwhile, his message about the complete corruption of our institutions was absorbed in a very different way by a very different audience. It helped to persuade the poor and the marginalized not to bother with the crayons and the coloring paper.

Trump beat the Democrats, in other words, by attacking them at their point of greatest vulnerability. And Democrats hurt their cause by not making an alternative case—the case for equality—with much conviction. It only gets more difficult from here. As Trump’s policies fail the people he promised to be the “voice” of, their cynicism will multiply.

It’s a sobering reality that while one party benefits from the cynicism, the other hasn’t figured out how to win by making the policies that promote greater equality the heart of its agenda. The votes are there, potentially. But the people who stand to benefit the most from a Democratic agenda are also the most financially insecure and alienated from the system, and thus the least inclined to vote. It’s a vicious cycle: more cynicism, more inequality, more power flowing toward the GOP.

That cynicism is simultaneously well-justified and poisonous to democracy. Overcoming it is a challenge as great as any the nation has faced.