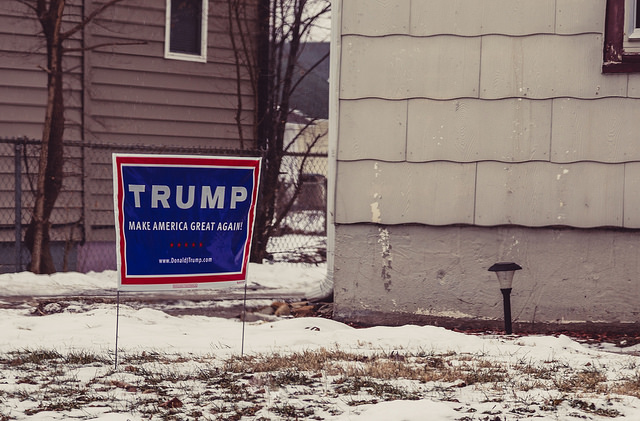 It hardly mattered to Republicans that much of Trump’s campaign was built on traditionally Democratic issues, such as his opposition to trade deals and his ambitious infrastructure plans. His supporters were ready to accompany Trump, a perfect vehicle for their resentments, on whatever path he barreled down. (Tony Webster/ Flickr)

Some lessons only become clear with time, but the 2016 election has already taught us a lot about our differences.

"Clinton lost Michigan, Pennsylvania and Wisconsin by a total of about 107,000 votes. Their 46 electoral votes would have given her the presidency."

Hillary Clinton’s loss has been called many things: a repudiation of progressivism, a mandate to repeal Obamacare, the failure of multiculturalism, the beginning of a GOP crackup, the shattering of the Democratic Party and so on.

It’s tempting to find such deep meanings in presidential elections. So much is invested in them and so much is at stake. But the immediate lessons we draw from them are often different than history’s judgment. Consider the 1964 election, when Republicans won just six states and it looked as if the GOP, torn apart by a war between its far-right wing and the establishment, would be in the wilderness for decades. Yet Republicans won five of the next six presidential elections, including a nearly clean sweep in 1972, when the Democratic candidate won only one state.

Donald Trump’s win was nothing like that blowout. Clinton lost Michigan, Pennsylvania and Wisconsin by a total of about 107,000 votes. Their 46 electoral votes would have given her the presidency. If she had won those states and 120,000 more votes in Florida, we would be discussing a comfortable Clinton win. In other words, fewer than 250,000 votes were the difference between two radically different narratives and interpretations.

So the basis for claiming that there is a deep meaning to what just happened is weak indeed. Most of the election’s meaning is yet to be determined, based on what the Trump administration becomes and how we respond. With those caveats in mind, there are some takeaways that seem likely to endure, even if they don’t hold up as main points in the years to come.

The defection of the white working class from Democrats was real, especially in the crucial states of Michigan, Pennsylvania and Wisconsin. In those states, the most important factor in Trump’s improvement on Mitt Romney’s performance was the shift among people with only a high school education, and among people with some college but not a bachelor’s degree. The effect wasn't so much that it drove up turnout. Instead, it flipped just enough votes to turn the election. In Wisconsin, for example, Trump got roughly the same number of votes as Romney, but Clinton got about 230,000 fewer than Obama in 2012. In Michigan, she got nearly 300,000 fewer votes than Obama.

Trump’s pose as the voice of the working class played a role in the defections. But the shift wasn't only about economic pain. It was also about the growing cultural divide between rural and urban America. Katherine Cramer, a political scientist at the University of Wisconsin, calls it “the politics of resentment” in a recent book focused on Wisconsin. She notes that “in a politics of resentment, people intertwine economic considerations with social and cultural considerations in the interpretation of the world they make with one another.”

The Clinton campaign’s air of entitlement hurt the candidate badly on this front. It wasn't just her “basket of deplorables” comment. It was that she didn't show up at all in Wisconsin and hardly at all in Michigan. And she disappeared from the trail altogether for stretches, letting Trump set fire to his own campaign, supposedly, while she ran up the score on the fundraising front. The New York Times reported in early September that Clinton had spent much of the summer partying with the “ultrarich” in the Hamptons, Beverly Hills and other enclaves of privilege.

“Mrs. Clinton, who has promised to ‘reshuffle the deck’ in favor of the middle class and portrayed Mr. Trump as an out-of-touch billionaire, has almost exclusively been fielding the concerns of the wealthiest Americans,” the Times noted.

Raking in big checks, fortifying its war chest and taking comfort in the polling, the campaign displayed no sense of urgency about its legislative agenda. In the end, Clinton ran a slightly enhanced version of Jeb Bush’s “please clap” campaign: she was a candidate with a stellar resume and more money than she could use, but without a compelling message. That vacuum was reflected in the turnout and in the lack of enthusiasm among Clinton’s base. While Obama won the African-American vote by 87 points in 2012 and the Hispanic vote by 44 points, Clinton won those voters by 80 points and 36 points, respectively.

“We don’t vote against somebody,” as Leslie Wimes, president of the Democratic African-American Women Caucus, told Politico. “We vote for somebody.”

Motivation was never an issue on the other side. It hardly mattered to Republicans that much of Trump’s campaign was built on traditionally Democratic issues, such as his opposition to trade deals and his ambitious infrastructure plans. His supporters were ready to accompany Trump, a perfect vehicle for their resentments, on whatever path he barreled down. The depth of the resentment on the Right occasionally broke through in scenes from his rallies: the vibe of barely suppressed mayhem, sometimes breaking out into violence. It was evident, too, in the code-red alarms going off in the right-wing media throughout the campaign.

One small example: In early September, an anonymous writer in Claremont Review of Books made the case for Trump based on the fact that he had “the right stances on the right issues—immigration, trade, and war—right from the beginning.” The essay was titled “The Flight 93 Election”—a nod to the perceived urgency of the situation. It began: “Charge the cockpit or you die. You may die anyway. You—or the leader of your party—may make it into the cockpit and not know how to fly or land the plane. There are no guarantees.” The essay touched a nerve and went viral in conservative circles. Rush Limbaugh devoted an hour of his show to discussing and recommending it.

Clinton often told supporters that she was the only thing between them and the apocalypse. Now, in the aftermath of the event, some questions present themselves. Is the Democratic coalition salvageable? What will the election of 2020 look like? 2024? What we will make, by then, of what just happened? Will Trump’s narrow victory look like an aberration—or the dawn of a new era? Who or what can stop the men who have just charged the cockpit?

The election’s meaning will emerge as such questions are confronted and answered over the next few months, years and decades. It will evolve from the tension between Trump’s agenda and our pushback. There are no guarantees.