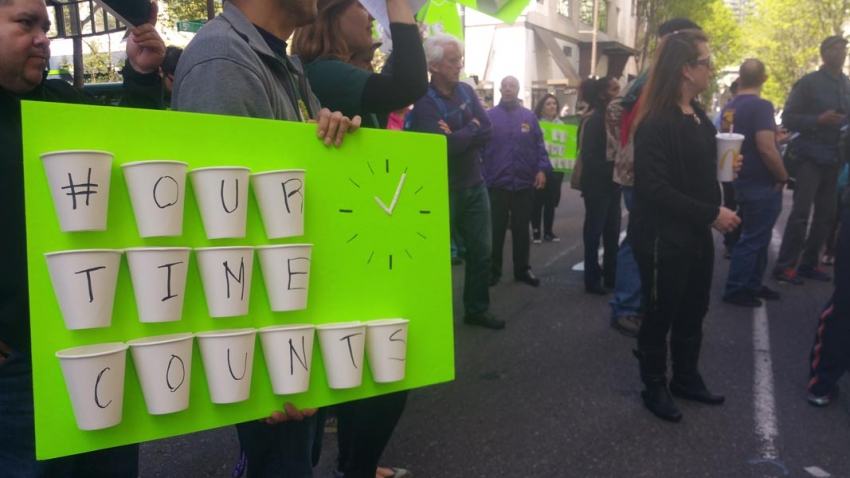 Why Fair Scheduling Could Be Labor’s Next Big Fight

A series of citywide ordinances are taking aim at erratic and unpredictable scheduling.

This fall, city governments in both Seattle and Emeryville, Calif., passed their own fair scheduling laws, which expanded on San Francisco’s by covering workers in both retail and fast food.

When Jamal Targa, 29, worked as a pizza delivery driver in San Francisco, he says his boss would regularly call him just hours after he’d finished driving for the night to demand he show up to work the morning shift. Although shifts were scheduled ahead of time, the boss switched them at the last minute to deal with fluctuations in demand or to replace unavailable drivers. Targa says that if drivers refused to come in on short notice, the boss would cut their hours the following week. Twice, he was so sleep-deprived that he collapsed on the floor of the pizza place.

“It felt like slavery,” he says. “I had to hide my feelings because I knew that’s just how it is—you have to come to work or else you lose your job.”

About 17 percent of U.S. workers have unstable work schedules, according to a 2015 study by the Economic Policy Institute. That’s why many groups see fair scheduling laws as labor’s next big fight. In one bright spot on November 8, voters in San Jose, Calif., passed a labor-backed ballot initiative that will require employers to give more hours to part-time workers before hiring additional employees. Such local initiatives could be one of the few openings for labor under a Donald Trump presidency.

This year, campaigns to raise the minimum wage paid big dividends as wage laws took effect in 14 states, boosting the incomes of 4 million workers. But higher wages only go so far if you can’t get enough work hours, or you lose your job because you can’t accommodate a last-minute shift change.

“Workers need a fair and livable wage, but they also need other aspects of their jobs to be reasonable so that they can actually keep the jobs and at the same time take care of their families and manage to get by,” says Liz Ben-Ishai, a senior policy analyst on the job quality team at the Center for Law and Social Policy (CLASP), a nonprofit research and advocacy group.

In 2014, a coalition of labor and community groups campaigned successfully to pass the nation’s first fair scheduling law in San Francisco. Among other protections, the Formula Retail Employee Rights Ordinance requires stores to create work schedules at least two weeks in advance and to pay an extra 1-4 hours in wages for last-minute schedule changes or “on-call” shifts. The ordinance applies to retail chains that have at least 40 stores worldwide and employ more than 20 people in San Francisco.

The movement quickly picked up momentum. This fall, city governments in both Seattle and Emeryville, Calif., passed their own fair scheduling laws, which expanded on San Francisco’s by covering workers in both retail and fast food. In 2014, Rep. George Miller (D-Calif.) introduced federal legislation that would require employers to post schedules two weeks in advance and provide pay to workers who are required to work or end their shifts early on short notice, though the action at the federal level looks bleak.

Erratic or unpredictable schedules are especially common in the retail and food service industries, where workers are often required to work “clopening”—closing the store at night, only to return early the next morning to open it again. Scheduling software that automatically divvies up shifts among workers makes it extremely easy for large companies to keep labor costs down in response to fluctuating demand or external events that drive down revenue, such as bad weather.

But unpredictable scheduling can make it nearly impossible for workers to both care for their families and earn a steady living. More than half of those who provide care to children or elders are also in the workforce, and low-wage workers are particularly likely to have irregular schedules. There is evidence of racial disparities as well. This year, a CLASP survey of approximately 700 workers and 350 managers in Seattle found that scheduling issues caused difficulties in the lives of around 40 percent of African Americans, compared to about 33 percent of workers overall. “There’s a real racial justice element” in the push for fair scheduling, says Ben-Ishai.

New York City may be the next to take up the issue. In September, Mayor Bill de Blasio announced that he would join with members of the City Council and a coalition of labor and community organizations to draft legislation ensuring regular scheduling for 65,000 fast-food employees.

Given support from local lawmakers, the odds currently look good for such an effort. But that could change if the city’s powerful restaurant industry steps into the fray. In September 2015, Minneapolis Mayor Betsy Hodges championed one of the strongest fair-scheduling policies that had yet been proposed, covering all employers of any size. It was part of a broader campaign for worker-friendly legislation called the “Working Families Agenda.” But the local business lobby and restaurant associations convinced the mayor to drop the fair-scheduling component of the legislation, postponing further discussions until mid-November. That same month, labor advocates in the District of Columbia suffered a similar blow. The Washington City Paper reports that, following an industry-led campaign against a fair-scheduling ordinance, former sponsors of the policy voted to table it, effectively killing it.

Once fair-scheduling policies are implemented, the challenge becomes enforcement. Two years following the passage of San Francisco’s law, “most workers have never heard of it,” says Ilana Master, co-director of Young Workers United (YWU), a labor group that helped push for the law. “Many employers are not complying with small parts of it, such as predictability pay for schedule changes.”

In collaboration with the city’s Offi ce of Labor Standards Enforcement, YWU is reaching out to the city’s most vulnerable workers to inform them about their rights. Staff give presentations at local universities and community centers, and even just show up at retail centers like San Francisco’s Union Square to talk to workers. After quitting his pizza-delivery job, Jamal Targa is working with YWU to help his former coworkers recover overtime wages they say they are owed. He’s hopeful that San Francisco’s law will create better jobs, and that more cities will follow suit. “I hope this trend continues,” Targa says. “This is what people need to live their lives.”

Jonathan Timm is a freelance reporter who specializes in labor and gender issues. Follow him on Twitter @jdrtimm.