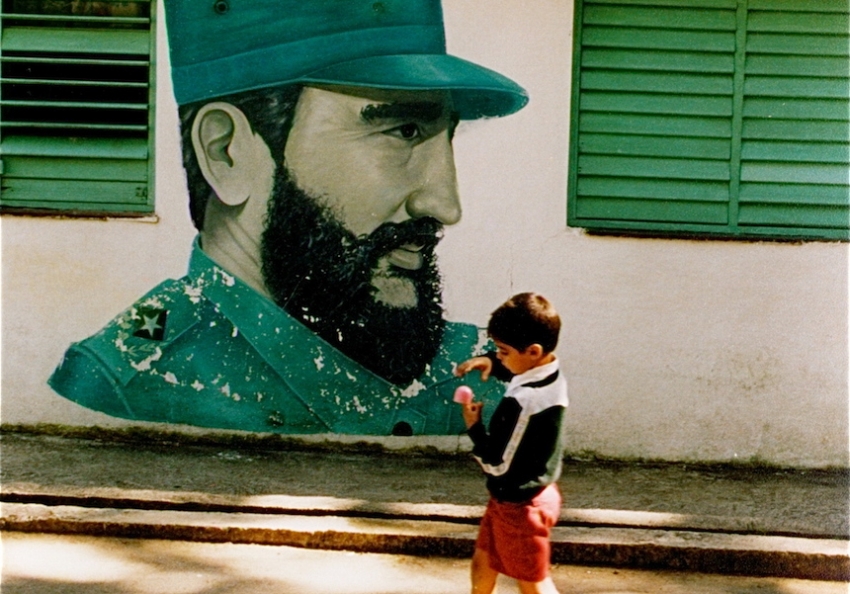 In the last decades, Cuban “socialism” continued to live only because it didn’t yet notice it was already dead.

The true tragedy is that the very remaining authenticity of the Cuban revolution made it possible for the Castro brother’s government to drag on endlessly and meaninglessly, deprived of the last vestiges of an emancipatory potential.

I am critical of Cuba not because I am anti-Communist but because I remain a Communist.

We all remember the classic scene from cartoons: a cat walks over the precipice and magically goes on, floating in the air—it falls down only when it looks down and becomes aware that it has no ground under its feet. In the same way, one can say that, in the last decades, Cuban “socialism” continued to live only because it didn’t yet notice it was already dead.

It is clear that Fidel Castro was different from the usual figure of a Communist leader, and that Cuban revolution itself was something unique. Its specificity is best rendered by the duality of Fidel and Che Guevara: Fidel, the actual Leader, supreme authority of the State, versus Che, the eternal revolutionary rebel who could not resign himself to just running a State. Is this not something like a Soviet Union in an alternative past in which Leon Trotsky would not have been rejected as the arch-traitor? Imagine that, in the mid-1920s, Trotsky were to emigrate and renounce Soviet citizenship in order to incite permanent revolution around the world, and then die in the highlands of Papua New Guinea soon afterwards. After his death, Stalin would have elevated Trotsky into a cult, and monuments celebrating their friendship, along with iconic t-shirts, would proliferate all around the USSR.

One gets tired of the conflicting stories of the economic failure and human rights abuses in Cuba, as well as of the twins of education and healthcare that are always trotted out by the friends of the revolution. One gets tired even of the really great story of how a small country can resist the biggest superpower (yes, with the help of the other superpower).

The saddest thing about today’s Cuba is a feature clearly rendered by the crime novels of Cuba’s literary icon Leonardo Padura, which features detective Mario Conde and are set in today’s Havana. Padura’s atmosphere is the one not so much of poverty and oppression as of missed chances, of living in a part of the world to a large extent bypassed by the tremendous economic and social changes of the last decades.

All of the above mentioned stories do not change the sad fact that the Cuban revolution did not produce a social model relevant for the eventual Communist future. I visited Cuba a decade ago, and on that visit I found people who proudly showed me houses in decay as a proof of their fidelity to the revolutionary “Event”: “Look, everything is falling apart, we live in poverty, but we are ready to endure it rather than to betray the Revolution!” When renunciations themselves are experienced as proof of authenticity, we get what in psychoanalysis is called the logic of castration. The whole Cuban politico-ideological identity rests on the fidelity to castration—no wonder that the Leader is called Fidel Castro!

The true tragedy is that the very remaining authenticity of the Cuban revolution made it possible for the Castro brothers' government to drag on endlessly and meaninglessly, deprived of the last vestiges of an emancipatory potential. The image of Cuba one gets from someone like Pedro Juan Gutierrez (in his “dirty Havana trilogy”) is telltale. The Cuban common reality is the truth of the revolutionary Sublime: the daily life of struggle for survival, of the escape into violent promiscuous sex, of seizing the day without any future-oriented projects.

In his big public speech in August 2009, Raúl Castro lambasted those who just shout “Death to the U.S. imperialism! Long live the revolution!” instead of engaging in difficult and patient work. All the blame for the Cuban misery (a fertile land that nonetheless imports 80 percent of its food) cannot be put on the U.S. embargo: There are idle people on the one side, empty land on the other side, and one has just to start working the fields.

Obviously this is true, but Raúl Castro forgets to include into the picture he was describing his own position: If people don’t work the fields, it is obviously not because they are lazy but because the system of economy is not able to convince them to work. Instead of reprimanding ordinary people, he should have applied the old Stalinist motto according to which the mobile of progress in Socialism is self-critique, and exert a radical critique of the system he and Fidel personify. Here, again, evil is in the very critical gaze which perceives evil all around.

So what about pro-Castro Western Leftists who despise what Cubans themselves call “gusanos/worms,” those Cubans who emigrated to find a better life? With all sympathy for the Cuban revolution, what right does a typical middle-class Western Leftist, like too many readers of In These Times, have to despise a Cuban who decided to leave Cuba not only because of political disenchantment but also because of poverty? In the same vein, I myself remember from the early 1990s dozens of Western Leftists who proudly threw in my face how, for them, that Yugoslavia (as imagined by Tito) still exists, and reproached me for betraying the unique chance of maintaining Yugoslavia.

To that charge, I answered: I am not yet ready to lead my life so that it will not disappoint the dreams of Western Leftists. Gilles Deleuze wrote somewhere: “Si vous etes pris dans le reve de l’atre vous etez foutu!”—If you are caught in the dream of the other you’re ruined. Cuban people paid the price for being caught into the Western leftists’ dream.

The gradual openings of Cuban economy towards a capitalist market are compromises that do not resolve the deadlock but, rather, drag on the predominant inertia. After the impending fall of Chavismo in Venezuela, Cuba has three choices: to continue to vegetate in a mixture of Communist party regime and pragmatic concessions to the market; to embrace fully the Chinese model (wild capitalism with party rule); to simply abandon Socialism and, in this way, admit the full defeat of the Revolution.

Whatever will happen, the saddest prospect is that, under the banner of democratization, all the small but important achievements of the Revolution, from healthcare to education, will be undone, and the Cubans who escaped to the United States will enforce a violent re-privatization. There is a small hope that this extreme fallback will be prevented and a reasonable compromise negotiated.

So what is the overall result of the Cuban revolution? What comes to my mind is Arthur Miller’s experience on the Malecon (Havana’s Caribbean ocean-front boardwalk) where two guys were sitting at a bench near him, obviously poor and in need of a shave, and engaged in a vivid discussion. A taxi then pulled up to the curb in front of them and a lovely young woman stepped out with two brown paper bags full of groceries. She was juggling the bags to get her money purse open, and a tulip was waving dangerously close to snapping its stem. One of the men got up and took hold of one of the bags to steady it, while the other joined him to steady the other bag, and Miller wondered if they were about to grab the bags and run. Nothing like this happened—instead, one of them gently held the tulip stem between forefinger and thumb until she could get the bags secured in her arms. She thanked with a certain formal dignity and walked off. Miller’s comment:

I'm not quite sure why, but I thought this transaction remarkable. It was not only the gallantry of these impoverished men that was impressive, but that the woman seemed to regard it as her due and not at all extraordinary. Needless to say, she offered no tip, nor did they seem to expect any, her comparative wealth notwithstanding.

Having protested for years the government's jailing and silencing of writers and dissidents, I wondered whether despite everything, including the system's economic failure, a heartening species of human solidarity had been created, possibly out of the relative symmetry of poverty and the uniform futility inherent in the system from which few could raise their heads short of sailing away. (Arthur Miller, “A Visit with Castro,” The Nation, December 24 2003)

At this, the most elementary level, our future will be decided. The reality that global capitalism cannot generate is precisely such “heartening species of human solidarity,” to use Miller's phrase. So to conclude in the spirit of de mortuis nihil nisi bonum (nothing that is not good should be said about the dead), this scene on Malecon is perhaps the nicest thing I can remember about Castro.