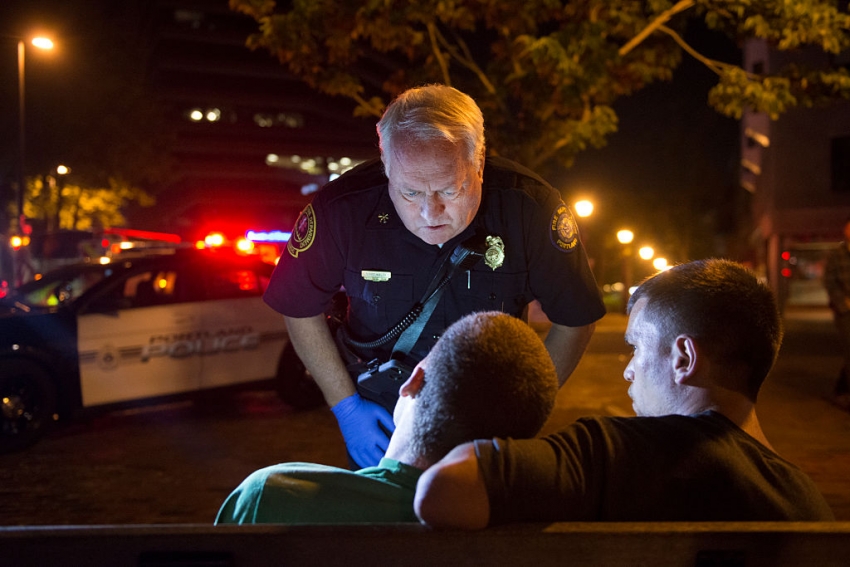 In the current U.S. context, the low bar for being on the “Left” is that you support public policy that actually works to treat the symptoms of structural problems. (Photo by Linda Davidson / The Washington Post via Getty Images)

The president-elect performed well in places with the highest rates of death from suicide and drug abuse.

'In a lot of these places, good-paying jobs and the dignity that goes along with those good-paying jobs has been replaced by suffering and hopelessness and the belief that people in power don't really care about them or their communities.'

Gun violence and the opioid epidemic are good barometers of U.S. politics. Hillary Clinton and Donald Trump spoke about both during the 2016 campaign. Trump even gave a speech and offered details of a plan to address the opioid crisis. All the talk hasn’t gotten us very far, though. It’s mostly been a shameful exercise in the politics of hopelessness.

Gun violence has long been a political issue, of course, but the murder count in Chicago—762 last year, the highest level since the mid-1990s—has moved it to center stage again. That’s because the Chicago angle allows the GOP to talk about some of its favorite themes: the failure of liberalism in urban America, the general chaos of big cities and the futility of gun-control laws.

Trump tweeted that if Chicago’s mayor can’t get the city under control, “he must ask for Federal help!” At National Review, editor Rich Lowry blamed the violence on the influence of Black Lives Matter and the ACLU, whose pushback against police violence has, supposedly, neutered law enforcement: “Chicago demonstrates that in swathes of inner-city America, you can have a chastened, passive police department, or a modicum of public order, but not both,” Lowry wrote. His solution? “Chicago simply needs to stop, arrest, and jail more dangerous people.”

The recent spike in opioid-related deaths isn’t as divisive, politically, but it’s been about equally deadly. The annual death toll from overdosing quadrupled between 1999 and 2015, according to the Centers for Disease Control and Prevention, which recently reported that more than 33,000 people died of an overdose in 2015. The same year, more than 35,000 people died from gun violence, including 22,000 suicides.

After the election, a sociologist at Pennsylvania State University, Shannon Monnat, studied the returns and found that both epidemics had a grim connection to the outcome. Counties where where Trump over-performed Mitt Romney in 2012 also had a higher-than-normal rate of death from suicide and alcohol and drug abuse.

Trump’s promise to be their “voice” resonated powerfully with those communities. The findings are “about downward mobility and the dismantling of the American dream at a larger community level,” Monnat told NPR. “In a lot of these places, good-paying jobs and the dignity that goes along with those good-paying jobs has been replaced by suffering and hopelessness and the belief that people in power don't really care about them or their communities.”

You can look at solutions to these epidemics in two ways: aiming to fix the root causes or aiming to treat the symptoms.

Getting to the root of things would mean thinking about the factors that lead people down certain paths, about policies that redistribute wealth and power, and so on. It would mean tackling a range of questions that our politics and media aren’t equipped to deal with in a serious way. That leaves us with treating the symptoms.

One solution to gun violence is to put more cops on the street. The conservative rallying cry has been that we need not only more cops but more aggressive cops. The great advantage of this solution is its simplicity. It’s an easy, populist talking point, which is why a recent 60 Minutes piece focused on it in a segment about the gun violence in Chicago. It spotlighted an agreement between the ACLU and the city of Chicago that reduced the number of street stops by cops, and blamed it for the rise in gun-related deaths over the past year.

The ACLU of Illinois noted in a response that there is, in fact, no relationship between street stops and a reduction in crime. In New York City, the relationship was actually the reverse: crime dropped when the number of stops dropped. “The most effective way to address violence in poor, black neighborhoods is to address economic disparity and improve education and youth programs,” the ACLU said.

If the root-problem remedies invoked by the ACLU aren’t an option, neither is the most obvious mitigating solution: gun control. Republicans still claim that Chicago has the strictest gun-control laws in the nation, but courts long ago struck down the laws that once distinguished Chicago from most of the nation: a ban on handguns, for example, and an Illinois ban on concealed carry.

Gun control is an imperfect solution, at best, to the epidemic. But in a more rational political culture, some basic reforms would be high on the agenda of the GOP, the “pro-life” party. Last year, a controversial study published in The Lancet found that passing three gun-control laws nationwide—universal background checks for both gun purchases and ammunition, and an ID system making it easier to trace weapons—would lower firearm fatalities by 90 percent. Critics disputed the methodology of the study. But the idea that such measures would reduce gun deaths isn’t really in doubt. It’s just a matter of how much.

Chicago’s reputation as “the Left’s city,” as one conservative writer recently put it, is more myth than reality. The Democratic political machine that runs Chicago seems mainly interested in keeping its grip on power. Targeting the city’s structural inequalities isn’t high on the agenda of many leaders, least of all that of the mayor, Rahm Emmanuel, who has burnished his neoliberal credentials across a range of issues, most notably by closing dozens of public schools in the city’s poorest neighborhoods.

But in the current U.S. context, the low bar for being on the “Left” is that you support public policy that actually works to treat the symptoms of structural problems. Being on the “Right” means supporting policy that doesn’t work, or has a modest effect, but is an easy political sell. Cutting taxes to increase revenue, for example, or unleashing more—and more aggressive—cops to lower crime rates.

We may be moving toward that kind of a split on the opioid epidemic. During the election campaign, Clinton offered a detailed plan for fighting drug addiction. One priority was to “ensure that every person suffering from drug or alcohol addiction can obtain the comprehensive, ongoing treatment he or she needs, and stay in recovery.”

And Trump? In his speech about the crisis, he gave priority to law enforcement and to keeping drugs out of the country. He would pursue and punish drug traffickers, he promised, and close loopholes that allow China and others “to send dangerous drugs across our borders in the hands of our own postal service.” Trump also promised to “give people struggling with addiction access to the help they need,” and noted that Congress had “already taken the first step by passing the Comprehensive Addiction and Recovery Act.”

That law, approved by Congress last year, passed by a nearly unanimous vote—a rare moment of bipartisan agreement on solutions. Will that unity last? Maybe. But one of the devastating effects of the GOP’s pledge to repeal Obamacare is that it would strip treatment from people with addiction problems. It's also not likely that the GOP-controlled Congress will make addiction treatment a priority, whatever replacement for Obamacare it comes up with. On the campaign trail, Trump claimed that his wall along the U.S.-Mexico border would help stem the tide of opioid overdoses. And it’s easy to see that claim becoming the centerpiece of the GOP’s strategy for dealing with the epidemic: tighter borders and harsher sentencing.

It’s ironic and all too familiar: the hopelessness that helped elect Trump breeds even more despondency. When the Right’s solutions don’t work, the problem inspires more demagoguery. We throw up our hands and claim that nothing can be done, other than more aggressive law enforcement. The politics of hopelessness rolls on.