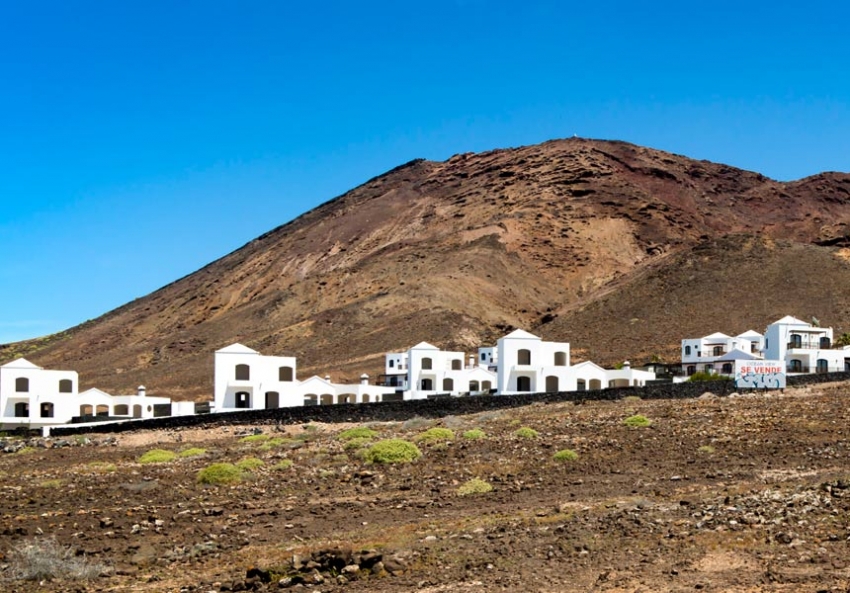 A holiday resort sits at the base of an extinct volcano in Lanzarote, one of Spain's Canary Islands. (Photo by Geography Photos/UIG via Getty Images)

Brexit From the Side of a Volcano

Contemplating capitalism and democracy in the Canary Islands.

It’s hard not to marvel at the contrast between the harsh, ragged, deathlike contortions at the centre of the island and its neat, regulated edges. And it’s hard, too, not to see that contrast as some kind of metaphor for the upheavals and turmoil of the world.

I’ve spent the last week on the moon, or so it seemed. Lanzarote is one of Spain’s Canary Islands that nestle in the Atlantic, 400 miles or so from Morocco.

Lanzarote suffered ferocious volcanic convulsions for six years in the 1730s and then again in 1824. There are limitless vistas of barren devastation, violently coloured black, brown, red, purple, interrupted only by hundreds of copy-cat conical shapes, large ones and little ones, with gaping holes in them that seem to have been blasted by giant drills and then tidied and smoothed by the wind. These are the volcanoes themselves, presumably extinct, though they are sometimes hot and always intimidating, surrounded by whorls of solidified lava stretching beyond view. These look at first like coarsely ploughed fields, a bit churned up and muddy perhaps, hard to walk across in your gumboots. In reality, they are rock-hard, utterly forbidding, impossible to walk on or to grow anything in. When you do catch sight of something green it is a small, defiant clump of cactus or euphorbia, gamely surviving against the odds but uninterested in spreading itself or succumbing to healthy, productive propagation.

This astonishing simulacrum of the moon’s landscape and of the world’s end has become a successful tourist destination. Planes bring visitors every day from all over Europe to the small settlements clinging to the island’s coast and built entirely of small Lego-like houses, white boxes of no more than two stories, comfortingly reminiscent of Babar the elephant’s Celesteville. It’s hard not to marvel at the contrast between the harsh, ragged, deathlike contortions at the centre of the island and its neat, regulated edges. And it’s hard, too, not to see that contrast as some kind of metaphor for the upheavals and turmoil of the world, with its strips and pockets of profitable capitalist activity thriving on the fringes of unbearable lives and places.

Facing the Atlantic and delighting in it and in the dry, balmy climate are thousands of British and German families, and some others, a few of them proudly and somewhat grossly nude.

I was there to visit an old friend who was on the island to recover from pneumonia. We enjoyed ourselves and thanked our stars as we settled to watch BBC World News. That felt extraterrestrial in itself. It’s a channel that is—perhaps mercifully—rather less concerned with what’s going on in your great country and mine than in Africa, South America and the Near and the Far East. Some of its presenters and reporters are men and women we recognised from their youth, who have now been put out to grass. But this channel of the BBC often employs serious, local experts, and even in that one week I learned quite a lot about the Kenyan vegetable business, about prison riots in Brazil and about what Turkey feels like these days for a left-wing intellectual. I was reminded of how insular and self-regarding our media can be.

Back in rainy London there are tube and rail strikes, and the National Health Service is thought to be at death’s door. As our new prime minister, Theresa May, mouths nonsense about a “sharing society”—we’re apparently no longer the “big society” à la Cameron, or the non-existent one (“there’s no such thing,” as Thatcher put it)— funding for local authorities, for schools, for welfare benefits and social care are all in full austerity mode. Schools, hospitals and prisons are gravely understaffed and underfunded, and, in addition, May tells us there must be “a mental health revolution.” Teachers and nurses and almost everyone else must be trained to detect mental health problems, though provision for helping people with such problems has suffered recent massive cuts.

We remember that Brexit motto: “Take back control.” Silly us. We assumed that meant a Parliament we’d voted for might have a say in it all, not that it would be left to the chaotic right-wing government with its small majority we’re currently landed with. At last, in January, the Supreme Court ruled that it was illegal for the Conservative government to go ahead with Brexit negotiations without consulting Parliament, as it planned to do. Something to be thankful for; greeted by the Daily Mail headline: “MPs’ New Plot to Thwart Brexit.”