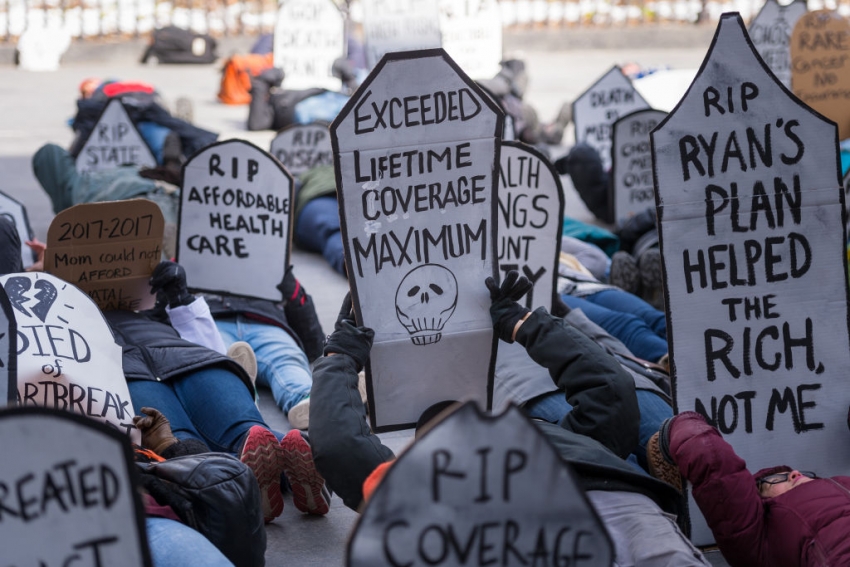 The GOP’s burning itch to dismantle Obamacare and reverse even the modest progress made in the provision of healthcare fits with the big-picture pattern of Donald’ Trump’s first weeks in office and of U.S. conservatism in general. (Photo by Albin Lohr-Jones/Pacific Press/LightRocket via Getty Images)

Forget about the future. The GOP just wants what it wants—now.

"Legislating is about serving and protecting the winners of the game; the future be damned."

Sen. Tom Cotton of Arkansas suggested Sunday that the push by his fellow Republicans to pass a healthcare reform bill was putting the GOP’s House majority at risk. Don’t “walk the plank and vote for a bill that cannot pass the Senate,” he warned. That warning became more urgent Monday after an analysis by the Congressional Budget Office showed that 24 million people would lose their healthcare insurance over the next decade under the GOP plan. The effects would hit older, low-income people especially hard. A 64-year-old making $26,500, for example, would pay $14,600 in premiums for insurance, versus $1,700 under Obamacare. Vox called it “one of the largest, most significant income redistribution programs the US government has ever considered—from the poor to the wealthy rather than the other way around.”

In a rational political culture, those numbers would move Republicans to reconsider their ideas. There is scant evidence that we live in such a culture. Over the weekend, Vice President Mike Pence called Kentucky “a textbook case of Obamacare’s failures.” In fact, the percentage of the state’s uninsured fell from more than 20 percent in 2013 to under 8 percent in 2016.

The GOP’s burning itch to dismantle Obamacare and reverse even the modest progress made in the provision of healthcare fits with the big-picture pattern of Donald Trump’s first weeks in office and of U.S. conservatism in general. That pattern is to legislate like there’s no tomorrow.

The hostility of the administration toward environmental programs and investments in green energy are prime examples. The payoffs aren’t purely monetary, and they extend across years or decades. Trump and his conservative supporters don’t see the point.

Take the case of water. Trump aims to dramatically restrict the federal government’s authority to protect the wetlands and small streams that connect to larger bodies of water and are thus important to the quality of drinking supplies. He also reportedly wants to essentially kill the Great Lakes Restoration Initiative, which is critical to efforts to clean up Lake Erie, the source of drinking water for about 11 million people. Its situation is especially precarious. Hazardous “algae blooms” are becoming more common and more potent in Lake Erie, in part because of runoff from fertilizer used on nearby farms. Toledo’s water has been so contaminated in the past that public health officials told residents not to drink it. Ohio has received about $200 million in federal funding through the Great Lakes Restoration Initiative since 2011, and part of the funding has gone toward teaching farming practices that use less fertilizer. Killing such programs will mean more contaminated water, and it will mean pouring money into fixing a problem, down the road, that could have been prevented.

The pattern is the same across just about every sector. The conservative agenda sacrifices the future for near-term savings that will wind up costing more than just addressing the problem in the first place. That’s true in countless ways with the GOP’s healthcare agenda. One telling example is that its proposed bill would slash the expansion of Medicaid in some 30 states, and gut the requirement that state Medicaid programs provide basic mental health and addiction services. If that happens, an estimated 1.3 million people would lose access to addiction treatment. Every day, about 1,000 people are treated in emergency rooms for misuse of prescription opioids. In 2015, more than 15,000 people died from overdoses involving prescription opioids. We will pay later for the havoc wrought by drug abuse, in other words, rather than pay up front to prevent it.

It’s no secret that humans are oriented toward immediate survival more than long-term investment. It’s something of a miracle we occasionally do manage to think long term on a big scale, and it usually takes a major jolt—the depression that inspired the New Deal, for example, or angst about Soviet scientific advances that inspired the mission to the moon.

Legislating like there’s no tomorrow isn’t exclusive to Republicans, in other words, but the party’s coalition has good reasons not to invest in the nation’s future. They don’t see themselves as part of it. They are often wealthy, disconnected from any particular place and free to roam, with their capital, to wherever they care to call home. And some are evangelical Christians, with the belief that Jesus will soon take them to heaven and make all the hand-wringing about the health of the planet irrelevant.

If the GOP’s healthcare plan isn’t good policy, it is at least an important clarifying moment. There are countless ways to frame the differences between conservative and progressive visions of politics, but the most fundamental one is perhaps this. For progressives, democratic government is the best tool that humans have devised to stitch together and pursue a notion of our common, long-term interests. The results are susceptible to all kinds of critiques. Government is often maddening and corrupt, and it almost always falls far short of the ideal. But that ideal serves as a standard to measure how far the system falls short.

Conservatives often claim to favor limited government and “freedom,” but that isn’t quite right. In truth, they favor a government that enriches the corporations and people who already have the wealth and power. They have little concern for the long term and no vision of a common good. There is only the blind pursuit of short-term gain. Legislating is about serving and protecting the winners of the game; the future be damned. That’s the evidence of Trump’s agenda so far, and it’s the message sent, clearly and powerfully, by the GOP’s healthcare bill.