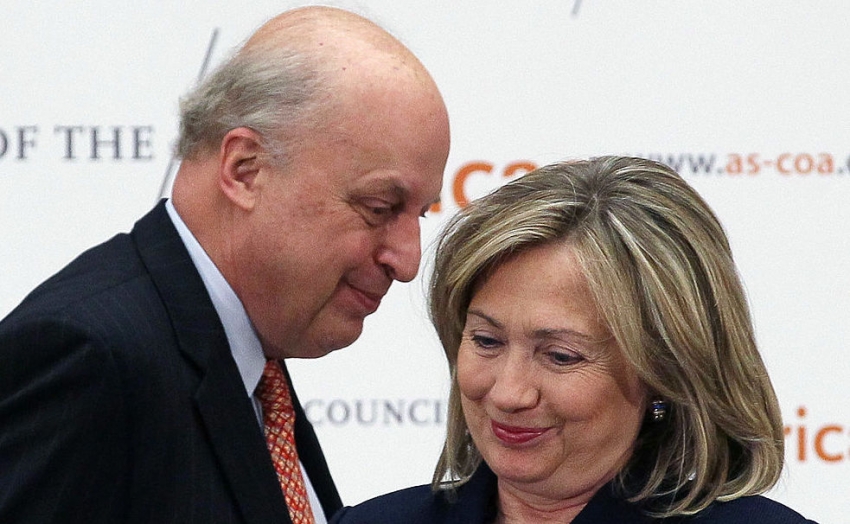 John Negroponte, Chairman of Council of Americas, introduces Secretary of State Hillary Clinton during the 41st Conference on the Americas. (Photo by Mark Wilson/Getty Images)

The case against the former U.S. ambassador to Hondurus and Iraq—and Bush intelligence czar.

In These Times has been following the career of John Negroponte for many years. Here is some of what we have reported.

George W. Bush’s choice of John Negroponte to be the first U.S. intelligence czar signals that Washington is heading down the same road that has led to earlier American intelligence failures and controversies—from politicizing analysis to winking at human rights abuses.

Although Negroponte’s nomination is expected to sail through the Senate, one question that might be worth asking about his tenure as U.S. ambassador to Honduras from 1981 to 1985 is: “Were you oblivious to the Honduran military’s human rights violations and drug trafficking, or did you just ignore these problems for geopolitical reasons?”

Negroponte either oversaw a stunningly inept U.S. intelligence operation at the embassy in Tegucigalpa—missing major events occurring under his nose—or he tolerated atrocities that included torture, rape and murder, while slanting intelligence reports to please his superiors in Washington.

Whichever it is—incompetence or complicity—it is hard to understand how Negroponte, the current U.S. ambassador to Iraq, can be expected to fix the intelligence flaws revealed by the Bush administration’s failure to connect the dots before the 9/11 terror attacks or to avert the scandalous use of torture on Muslim suspects captured in Afghanistan and Iraq.

Despite the bipartisan praise Negroponte’s nomination has elicited, a clear-eyed look at his record suggests that the Bush administration intends to continue making two demands on the U.S. intelligence community: that analysts wear rose-colored glasses when assessing U.S. policies and that field operatives turn a blind eye to atrocities committed by U.S. allies or American interrogators.

A history of oversight

Given the human rights records of the Honduran military and the Nicaraguan contras who set up shop in Honduras during Negroponte’s tenure as ambassador the early ’80s, he will have no moral standing as a public official who repudiates abusive interrogation techniques and brutal counterinsurgency tactics. Indeed, some cynics might suggest that’s one of the reasons Bush picked him.

Negroponte’s work in Honduras means, too, that he will come to his new job with a history of forwarding inaccurate intelligence to Washington and leaving out information that would have upset the upper echelon of the Reagan-Bush administration. For his part, Negroponte, who is now 65, has staunchly denied knowledge of “death squad” operations by the Honduran military in the ’80s.

In 1983, in another move that helped the Honduran military and the contras, the Reagan-Bush administration closed down the U.S. Drug Enforcement Administration (DEA) office at the U.S. Embassy in Tegucigalpa, just as Honduras was emerging as an important base for cocaine transshipments to the United States.

“Elements of the Honduran military were involved … in the protection of drug traffickers from 1980 on,” is how a Senate Foreign Relations investigative report, issued in 1989 by a subcommittee headed by Sen. John Kerry, put it. “These activities were reported to appropriate U.S. government officials throughout the period. Instead of moving decisively to close down the drug trafficking by stepping up the DEA presence in the country and using the foreign assistance the United States was extending to the Hondurans as a lever, the United States closed the DEA office in Tegucigalpa and appears to have ignored the issue.”

It’s unclear what role Negroponte played in shutting down the DEA office in Honduras during his time as U.S. ambassador, but it is hard to imagine that a step of that significance could have occurred without at least his acquiescence.

Negroponte’s ambassadorship also coincided with the evolution of the Nicaraguan contra forces from a small band under the tutelage of Argentine intelligence officers into an irregular army supported by the CIA, and later by a secret operation inside the White House run by National Security Council aide Oliver North.

Despite several investigations into what became known as the Iran-Contra scandal, many documents about Negroponte’s involvement remained classified, outside public knowledge. Some of that information bubbled to the surface in September 2001 when Negroponte was facing confirmation to be Bush’s ambassador to the United Nations.

In a Senate floor speech before Negroponte won confirmation, Sen. Christopher Dodd (D-Conn.) said, “The picture that emerges in analyzing this new information is a troubling one.” Summarizing the new documents from the State Department and CIA, Dodd said the evidence pointed to the fact that from 1980 to 1984, the Honduran military committed most of the country’s hundreds of human rights abuses. The documents reported that some Honduran military units, trained by the United States, were implicated in “death squad” operations that employed counterterrorist tactics, including torture, rape, and assassinations against people suspected of supporting leftist guerrillas in El Salvador or leftist movements in Honduras.

Dodd criticized Negroponte’s earlier Senate testimony. In response to questions about one of these units, Battalion 316, Negroponte had said, “I have never seen any convincing substantiation that they were involved in death squad-type activities.”

“Given what we know about the extent and nature of Honduran human rights abuses, to say that Mr. Negroponte was less than forthcoming in his responses to my questions is being generous,” said Dodd. “I was also troubled by Ambassador Negroponte’s unwillingness to admit that—as a consequence of other U.S. policy priorities—the U.S. Embassy, by acts of omissions, end[ed] up shading the truth about the extent and nature of ongoing human rights abuses in the 1980s.”

“The Inter-American Court of Human Rights had no such reluctance in assigning blame to the Honduran government during its adjudication of a case brought against the government of Honduras [in 1987],” Dodd said. “The Court found that ‘a practice of disappearances carried out or tolerated by Honduran officials existed between 1981-84’ … Based upon an extensive review of U.S. intelligence information by the CIA Working Group in 1996, the CIA is prepared to stipulate that ‘during the 1980-84 period, the Honduran military committed most of the hundreds of human rights abuses reported in Honduras. These abuses were often politically motivated and officially sanctioned.’ ”

However, when Bush nominated Negroponte to be ambassador to Iraq in 2004, Dodd and other Democrats largely dropped their objections. The National Catholic Reporter, which had covered the right-wing persecution of Catholic clergy in Central America during the ’80s, was one of the few publications still questioning Negroponte’s fitness.

In an April 2004 article, the magazine recounted a statement from Society of Helpers’ Sister Laetitia Bordes, who had gone to Honduras and approached Negroponte about the “disappearances” of 32 women who had fled to Honduras after rightist death squads in El Salvador assassinated Catholic Archbishop Oscar Romero in 1980.

Later, these women, including one who had been Romero’s secretary, “were forcibly taken from their living quarters in Tegucigalpa, pushed into a van and disappeared,” Sister Laetitia Bordes said. “John Negroponte listened to us as we exposed the facts. … Negroponte denied any knowledge of the whereabouts of these women. He insisted that the U.S. embassy did not interfere in the affairs of the Honduran government.”

The National Catholic Reporter noted, “Years later, the Baltimore Sun would reveal that Negroponte apparently knew more than he was letting on. In fact, charge his many critics, the ambassador oversaw an exponential increase in military aid to the Honduran army, deceptively downplayed human rights violations, and played a key role in supporting the activities of Battalion 316, a CIA-backed Honduran-based regional counterinsurgency unit subsequently found to be among the cruelest of the cruel.”

Many congressional Democrats, as well as Republicans, consider those two-decade-old concerns about Central America stale and irrelevant to Negroponte’s nomination as the nation’s first National Intelligence Director. But his tenure as ambassador to Honduras raises questions not only about his moral judgment and integrity, but his capacity to assess information and to ensure that political pressures don’t influence intelligence reporting.

As the first person chosen to hold this post—with oversight responsibility for all U.S. intelligence activities—Negroponte might legitimately be expected to represent something other than tolerance of death squads and politicization of intelligence information.