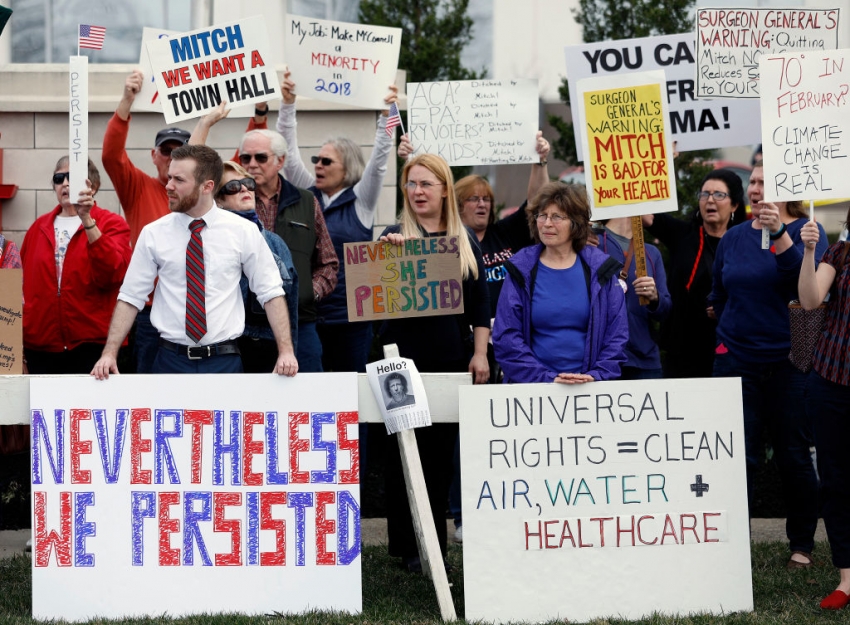 Undergirding pressure on establishment Democrats since the election, #AllOfUs contends, has been the possibility that they could face primary challenges. (Photo by Bill Pugliano/Getty Images)

If rumors about protesters being paid turn out to be true, this country might be closer to full employment than the most recent jobs report claims. Kicking off with the Women’s March, the day after President Donald Trump’s inauguration, voters have been mobilizing against the GOP’s agenda, pressuring Republicans and Democrats alike to reject it. Increasingly, activists are also looking to put the representatives who do collaborate out of a job.

During the Oscars, 30,000 people hopped on a phone call hosted by organizers from the Women's March, MoveOn.org, the Center for Popular Democracy, the Working Families Party and People's Action, all looking for ways to get or stay involved with anti-Trump resistance efforts. Indivisible, profiled here last month, has now swelled to more than 5,800 registered groups. Nearly 2 million people have downloaded its organizing guide.

When Congressional representatives headed home for recess, many of those same constituents flocked to in-district events. In some cases, they demanded their representatives hold them in the first place. #ResistanceRecess, organized by many of the groups that hosted the Oscars night call, brought activists out to around 1,000 events around the country. As part of the week of action, Paul Ryan’s Wisconsin constituents sent him more than 80,000 postcards demanding he stand up to Trump. In rural Iowa Falls, Sen. Chuck Grassley, a Republican, faced scores of anti-Trump protesters, many voicing concerns over the repeal of the Affordable Care Act (ACA). Voters in the Detroit suburbs brought a live chicken to a town hall meeting as a stand-in for no-show Rep. Dave Trott, also a Republican, after around a dozen people were turned away from his office earlier in the week.

Autumn Zemke, co-chair of the Carson City Chapter of the Working Families Party, helped turn 150 Nevadans out to line the sidewalks around a dinner Sen. Dean Heller attended with the Chamber of Commerce there. Some participants entered the venue itself.

“I have a feeling that some of those people in the room were previously his base,” Zemke told In These Times, “who are coming to some realization after Trump that this [administration] is going to hurt them.”

In Nevada, Zemke says some of voters’ main concerns are the threat Trump poses to the ACA, along with his embrace of men like “foreclosure king”-turned Treasury Secretary Steven Mnuchin. The state has faced an uphill road to recovery after the housing crash, which decimated home values in Las Vegas. Resisting Cabinet picks like Education Secretary Betsy DeVos, she says, “isn’t really a party issue. I think that’s just a bad choice for Nevada,” referencing the state’s consistently low-ranking in its quality of education.

While she grew up in northern Nevada, Zemke lived for several years in Seattle before moving back with her husband and young daughter in 2008. They quickly lost $50,000 off the value of their home. Last year, Zemke told me that she and her husband considered moving back to the Pacific Northwest, and “were seriously thinking that Nevada was not the right place, especially not rural Nevada. We live in a very conservative town.”

Then she started volunteering with Bernie Sanders’ primary campaign, having never done political work before. “I realized that Carson City is actually very progressive. It’s just that we didn’t know each other. After Bernie, people were reaching out to me,” Zemke says. The energy post-Bernie seems to have kept up, injected with a new dose of vigor post-election. A satellite Women’s March in nearby Reno drew an estimated 10,000 people.

“I’ll never go back to not being involved … We’re making the place we want to Iive rather than going to a place that’s really progressive. They don’t need us. Nevada needs us,” Zemke said.

From protest to politics

Analilia Mejia, director of New Jersey Working Families, is seeing a similar trend play out in her state—so much so that she returned early from maternity leave to help channel it. “I’ve talked to folks who, three months ago or three weeks ago, said they had to Google ‘Who is my representative?’ Now they’re participating in vigils every Friday in front of their offices,” says Mejia. “It’s a new crop of activists.”

Founded in 1998, the Working Families Party (WFP) has been running and endorsing progressive candidates for office for years, within and outside the Democratic Party. With a new influx of interest in progressive politics, first from Bernie and now from Trump, the group has become increasingly involved in mobilization efforts in states around the country. At a #ResistanceRecess event in Rep. Tom MacArthur’s district, hundreds of people showed up to a town hall that Working Families and Indivisible members had helped organize. MacArthur had been invited, but did not attend.

“I think [MacArthur] needs to know that this many people are interested in what he's doing, whether he calls people on a town hall and doesn't show up,” one attendee told a local news crew. “Look at this crowd, it's amazing!”

WFP hopes to funnel that kind of passion into the halls of power, and is hosting regular (and increasingly packed) trainings for constituents to learn how to run for office.

“What we’re working on is a plan to register new voters, run volunteer canvasses in target districts, and figure out ways to continue to mobilize people. Hopefully, it will all translate to a couple of legislative seats,” Mejia says. “That’ll be worth a few lost nights of sleep and a few gray hairs.”

It’s worked before. In addition to significant backing from places like Fox News and Americans for Prosperity, part of the Tea Party’s success relied on a two-pronged approach: accosting politicians around the clock and gunning for the seats of so-called RINOs (“Republicans In Name Only”). The approach paid off in droves. After the movement’s 2009 launch, Tea Party-backed candidates like Marco Rubio and Rand Paul captured seats in Congress’ upper and lower houses. Their success strengthened the party as a whole, too, with Republicans picking up six seats in the Senate and 63 in the House, over which they regained control in 2010. By 2014, long after Tea Party rallies had died down, they took back the Senate, as well. Even more stunning were Republican gains at the state level, where they now hold 33 governorships and total control—of the governors’ mansions and legislatures—in 25 states. In all, the GOP has driven Democrats out of a whopping 919 state legislative seats since 2009.

#AllOfUs will replace you

It’s that kind of momentum that groups like #AllOfUs are trying to replicate, with a slightly different strategy than WFP. Last month, it launched a hybrid PAC. That legal status means the group can collect donations and coordinate directly with candidates. Since launching in January, its average donations have clocked in at around $30—just $3 shy of Sanders’s oft-cited average per-person donation of $27. Undergirding pressure on establishment Democrats since the election, #AllOfUs contends, has been the possibility that they could face primary challenges.

“We are making an implicit threat explicit,” says Claire Sandberg, a staff member at #AllOfUs, and veteran of both Sanders’ primary campaign and New York’s fight against hydraulic natural gas fracturing.

Jess Pierce, her colleague at #AllOfUs, has worked on elections in every cycle since 2006, having first gotten involved in politics as a student at the University of California at Santa Cruz. She worked for years overseeing the NAACP’s national training programs and electoral work. She served most recently as the National Chair of the Black Youth Project 100 (BYP100) before joining #AllofUs’ tiny staff.

Out of curiosity, Pierce attended the first Tea Party rally in New York. “I’m not going to say it wasn’t scary,” Pierce says, “but what was interesting about it is that they were able to harness the energy and the passion of people in the moment, and really think about what it means to harness the energy of people who have all this political passion and no political home. That’s one of the questions we’re trying to answer right now.”

The people showing up to rallies and town hall meetings, Sandberg observes, “are confused as to why do so many elected leaders in our party have the instinct to fold when they should fight,” and angry with their Democratic representatives, especially, for their willingness to compromise with Trump’s team and agenda. “As an organizer for over a decade, I have never gone into any situation asking for a compromise,” Pierce adds.

Coverage of groups like Indivisible has tended to focus on people who look a lot like the original Tea Party’s base—for the most part, middle-aged white people, many of them having their first experience in activism. Yet the people behind #AllOfUs are almost exclusively millennials, most having cut their teeth in places like the Howard Dean and Sanders campaigns, and uprisings like Occupy Wall Street and the Movement for Black Lives. For Pierce and Sandberg, it’s important that any “Tea Party of the Left” formation be thoroughly multi-racial, with ample room for leadership available to millennials.

Having also seen the boom and bust cycle of different campaigns and social movements, #AllOfUs sees the PAC, in part, as a way to keep post-inauguration resistance energy up over the long term.

“People are coming out to town halls,” Pierce tells me, “but what are they doing next? How are they staying involved? How are we building beyond 2017 and 2018, and starting to ask questions about 2020 and beyond?”

It’s also, of course, a way to take back state power for progressives, and turn the Democrats into a party capable of beating Trump’s agenda. Accordingly, #AllOfUs endorsed Keith Ellison’s failed DNC leadership run, with several members signing off on a statement shortly after the defeat ensuring Tom Perez knew that “there’s still a fight within the Democratic Party,” and promising to push for “a Democratic Party that can actually be a vehicle for resisting Donald Trump and solving the crises in our country today.”

“The big danger that Democrats face,” Sandberg warns, “is that an uninspired base will not bother showing up if they don’t see Democrats fighting.”

“It’s a fight for the soul of the party,” she adds. “Is the party going to choose to join the resistance movement, or does it want to embrace Trump?”