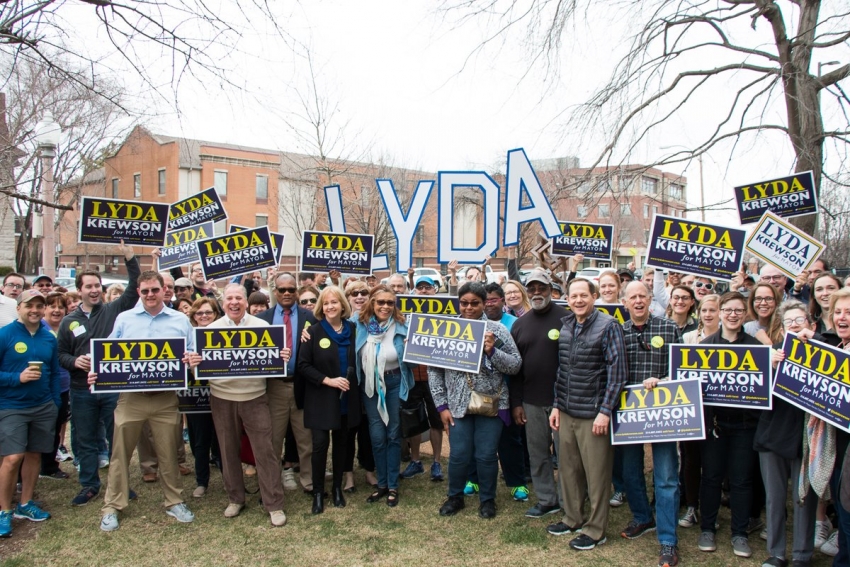 Tuesday’s winner, a white moderate Democrat, benefited from a split within the black community. (LydaKrewson/ Twitter)

Ranked choice voting offers a proven solution that empowers communities of color as well as candidates.

"The result in St. Louis should be a wake up call for people of color and progressive leaders everywhere."

Ferguson. Michael Brown. Racial tensions at the University of Missouri. St. Louis being crowned as the fifth most segregated city in the United States.

If ever there were places in need of racial healing, they are the state of Missouri and the St. Louis region. Instead, what St. Louis got was a racially divided election for mayor that has poured salt into the wounds. Tuesday’s winner, a white moderate Democrat, benefited from a split within the black community that chose among a heavily African-American field of candidates.

It has been decades since St. Louis, which is almost majority black, elected its first African-American mayor, and many are upset that, in their view, unchecked egos cost the black community an opportunity to lead this racially strained city. But also at fault was the defective “winner-take-all” electoral method used in the primary, which resulted in the black vote fragmenting among too many candidates.

In the Democratic primary, Alderwoman Lyda Krewson eked out a slim victory against six challengers, five of them African-American, winning with only 32 percent of the vote and a narrow 879-vote margin. That means more than two thirds of voters picked another candidate besides the victor.

In a city that is 49 percent black, the African-American vote was not able to come together around a single candidate, resulting in city Treasurer Tishaura Jones finishing second with 30 percent of the vote while Lewis Reed, city council president, was third with 18 percent, followed by Alderman Antonio French with 16 percent. All three leaned progressive, with some differences over specific issues.

This dynamic allowed the only prominent white candidate in the Democratic primary, and the more conservative candidate in the race among the frontrunners, to walk away with the win. Because St. Louis is a heavily Democratic city, Krewson easily outdistanced her main opponent, a black Republican, in the general election.

St. Louis University political scientist Ken Warren has observed that if either Reed or French had dropped out, Jones could have beaten Krewson, perhaps easily.

“The fact that the black community did not rally around one candidate makes it clear they spoiled their chances of being represented by a black mayor,” Warren said.

In the face of this disappointing loss, finger-pointing and recriminations are flying.

“Overall I felt like ego, patriarchy and sexism were the things that were leading the other candidates not to want to get out of the race. At some point we have to stop fighting each other and try to come together because now we are looking at four more years of policies that we all claim that we didn't want,” said Jones.

The possibilities of ranked choice voting

This dynamic has happened in other heavily populated African-American cities, where what would seem to be favorable demographics does not always result in more black leaders. Chicago, for example, where African-Americans make up almost a third of the population, has had only one black mayor in the last 30 years. Detroit and New Orleans, which are 83 percent and 60 percent black, respectively, have white mayors. New York City and Los Angeles haven’t had African American mayors in decades.

Splitting the vote among too many candidates has long been a significant barrier for racial minority communities, but proposed solutions have their own problems. Emory University political scientist Michael Leo Owens has made the case that a class of influential political elites must exert pressure to discourage weaker contenders from running in order to prevent too many minority candidates. But in the past such tactics have resulted in the worst kind of backroom politics and political machines.

Isn’t there a way to allow multiple candidates to run, and voters to pick the candidates they like, without the contenders knocking each other out of the race?

Fortunately, there is. It’s called ranked choice voting (RCV). With this method, which is used in a number of major U.S. cities, including Minneapolis, St. Paul, Oakland and San Francisco, as well as in London, Ireland and Australia, voters get to rank at least three choices, instead of picking only one candidate. Voters put their favorite candidate in the top spot, and then rank other candidates, in order of preference, as backups.

With RCV in the St. Louis election, a voter could have ranked Reed or French as her first choice and then Jones as her second or third choice. When Reed or French were eliminated from what’s called the “instant runoff,” due to lack of support, their supporters’ votes would have gone to their second choice.

Ranked choice voting prevents “spoiler” candidates and split votes within groups of like-minded voters. In the case of St. Louis, it also would have ensured that the frontrunners, Krewson and Jones, tried to reach out beyond their bases to win a true majority coalition. RCV provides incentives for candidates to extend across the usual battle lines and find common ground. It changes the strategy of an election from one of “you against me” to one of building coalitions.

This becomes especially important in any city that is divided, whether on racial, partisan or economic grounds. RCV helps to reduce the division and polarization that can too easily creep into our politics. Racial minorities in San Francisco, Minneapolis and Oakland all have done particularly well using the RCV system.

In San Francisco, for example, the first Asian-American mayor was elected in 2011, and in Oakland the first Asian-American woman was elected mayor in 2010. Both contests used RCV elections. Additionally, RCV has helped produce the most representative and diverse Board of Supervisors in San Francisco's history. Currently, eight out of 11 members of the Board of Supervisors are ethnic or racial minorities and six are women of color. Indeed, of all 53 seats elected by RCV in the Bay Area, 61 percent are held by people of color. Minneapolis’ RCV elections resulted in the first Latino, Somali and Hmong Cambodian candidates being elected to the city council.

In city after city, RCV has produced a diverse and representative group of elected officials. And candidates are winning by building coalitions with racial minority communities, no longer splitting their votes among too many candidates.

RCV also provides some campaign finance reform, as well as boosts voter turnout. Using RCV, taxpayers have saved the cost of a needless second runoff election, and candidates don’t have to raise money for two elections. Voters and organizations can maximize turnout by mobilizing for one election. By getting the vote over in a single RCV election in November, when more voters are at the polls to vote for president or governor, more people get to have a say in who their local elected officials are.

A wake up call

If RCV had been used in St. Louis’s Democratic mayoral primary, it’s very likely that Jones would have been able to make up the 879-vote difference by picking up the second and third rankings from supporters of the other black candidates. But another possibility is that Krewson would have had to reach out beyond her base in the white neighborhoods to the black community and to the supporters of the other candidates. She might still have finished first, but only if she was successful in building a coalition by attracting enough black voters to win a majority, which would have resulted in less division, more legitimacy and a stronger mandate.

The result in St. Louis should be a wake up call for people of color and progressive leaders everywhere. When a white candidate wins in a black city with less than a third of the vote—and those votes are won predominantly in the white areas, while the votes from African Americans get split among too many black candidates —it’s time to take a look at the rules of the game that allowed that outcome to happen. Ranked choice voting offers a proven solution that empowers communities of color as well as candidates. It is a powerful tool in the voting rights arsenal that should be deployed in every U.S. city.