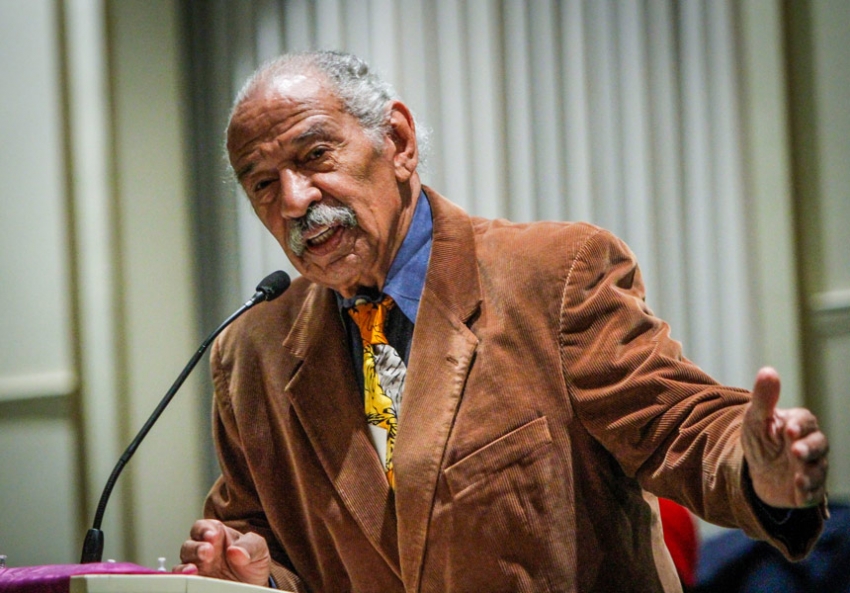 Rep. John Conyers (D-Mich.) is the author of H.R. 40, a reparations bill invoking the promise of “40 acres and a mule.”(Photo By Sarah Rice/Getty Images)

This Could Be Reparations’ Best Chance Since 1865

Black activist groups across the political spectrum are uniting behind reparations.

Some reparations advocates sense an opportunity in Trump’s disruption of business as usual, including the incremental “civil rights approach” to racial disparity.

Reparations for African-Americans were once a boutique demand from fringe groups of black nationalists. Not that the concept lacks pedigree: In 1865, Union Gen. William Sherman set aside thousands of acres for the newly freed by way of a special field order. But President Andrew Johnson soon returned the titles to the original white owners, and reparations gained little traction for a century and a half. A bandwagon began rolling in the 1990s (spurred by an elite group of black attorneys, including Harvard’s Charles Ogletree and the law firm of the late Johnnie Cochran), but was knocked off track by the terrorist attacks of 9/11 and the shift to the right in public discourse.

The idea has now emerged as the unifying strategy for black activist groups all along the political spectrum, and it has even attracted some support from unusual suspects like the Southern Christian Leadership Conference, the Green Party and newly minted Sen. Chris Van Hollen (D-Md.), the first U.S. senator to support a study of the concept.

The notion has gained such public appeal that there is a new wellspring of support for the weathered H.R. 40, a bill introduced annually for the past 28 years by Michigan Rep. John Conyers. The original bill, The Commission to Study Reparation Proposals for African Americans Act, was designed to examine the negative effects of slavery and recommend appropriate remedies. Conyers, now 87, introduced an updated bill in February that reflects a scholarly consensus about the ongoing legacy of the transatlantic slave trade.

“Present-day injury has already been proven,” says Kamm Howard, the legislative commission chair for the National Coalition of Blacks for Reparations in America (N’COBRA), founded in 1987. “The new bill starts from that point, and we talk about repair and remedies.”

A wealth of studies reveals how the plunder of slavery both nourished the roots of American prosperity and led to contemporary dysfunctions in Black America. Such links continue to emerge as institutions such as Georgetown, Rutgers, Harvard, New York Life, AETNA and JP Morgan disclose the slave-trading skeletons in their closets. Additional studies show the racially disparate effects of New Deal policies and mid-20th-century housing discrimination. Ta-Nehisi Coates compiled much of that scholarship in his influential essay in the June 2014 issue of The Atlantic, “The Case for Reparations,” which triggered a series of forums further publicizing the issue.

Now, organizations ranging from mainstream standbys like the NAACP and the Urban League to the left-leaning BYP100 and Movement for Black Lives have come together in concert over the concept. This assent is rare. Longtime activist Ron Daniels has formed an umbrella group, the National African American Reparations Commission, to leverage this heightened interest while it lasts.

According to an exclusive poll released last month in conjunction with a new PBS series, Point Taken, 40 percent of millennials think there should be reparations for African-American descendants of enslaved people. This is a significantly higher number than in previous polls.“We see the reparations struggle as one with four legs,” says N’COBRA’s Howard. “Litigation, legislation, public mobilization and internationalization. We’re still not up to speed, but we’re on track.”

Some reparations advocates sense an opportunity in Trump’s disruption of business as usual, including the incremental “civil rights approach” to racial disparity. But most interpret the ascent of rightwing populism as an obstacle on the road to reparations. Meanwhile, Conyers’ reconditioned H.R. 40 has been referred to the House Judiciary. Where, so far, it languishes.