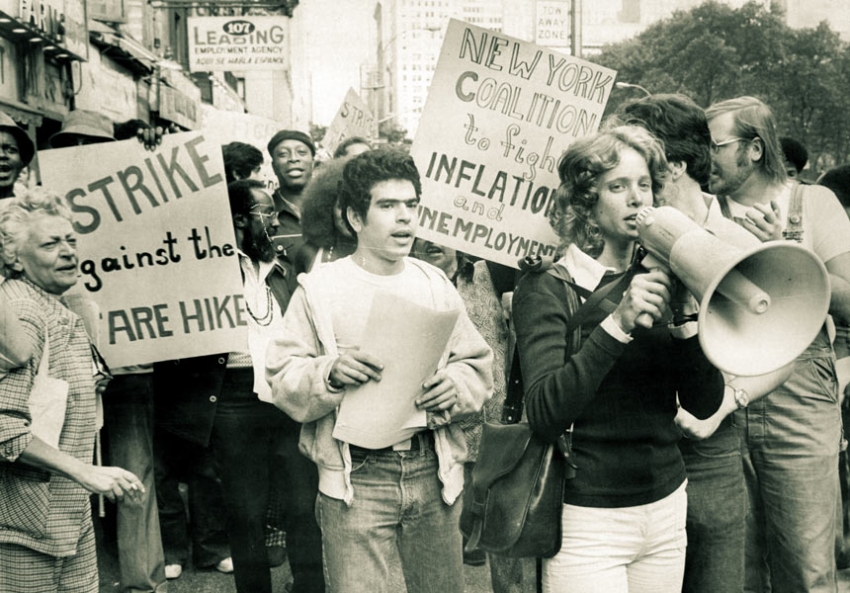 Antagonism among the ruling classes toward the city’s “lifestyle” created a false “sense that New York City’s problems were entirely its own fault.”

You might expect a book titled Fear City to be a bit more terrifying than Kim Phillips-Fein’s just-released history of New York’s famous mid-1970s cash crunch, ominously subtitled New York’s Fiscal Crisis and the Rise of Austerity Politics. It’s not for lack of villains: Many of the book’s central characters—Don Rumsfeld, Alan Greenspan, Dick Cheney, Bill Simon—would go on to do much more sinister things. But in 1975, when the banks that had financed the budget deficit went on strike and brought the city to the brink of bankruptcy, the neoliberal “shock doctrine” mafia was just cutting its fangs.

Under the “junta” (as the Village Voice called it) appointed to balance the budget, New York saw layoffs, cutbacks and hospital shutdowns. The cost of a subway token soared from 35 to 50 cents ($2.23 in today’s terms). Classrooms teemed with as many as 60 kids, twice the limit stipulated in the teachers’ contracts. Women who had been unemployed for more than four months were no longer eligible to send their kids to the sprawling network of free city day care centers. (I’d like to say my heart bled reading that part, but I was paying a babysitter $15 an hour for the luxury, so it felt more like an ulcer.)

The scariest thing about the book is the memory of a time not long ago when what New York needed most was more rich people living (and paying taxes) in it. Fully 49 percent of its population in the 1970s made less than the median national income—the city was, in other words, a socioeconomic mirror image of America. But there were world-class parks and museums and libraries, and abundant affordable housing, and tuition-free college, and a vast network of public hospitals and clinics offering everything from affordable root canals to braces to eyeglasses to dialysis. Where federal Medicaid and welfare funding fell short, the city picked up the tab—and by the late 1960s, increasingly borrowed money to cover the difference.

As exotic and exceptional as all this may sound, the macroeconomic cluster bomb that hit urban America in the early 1970s was, Phillips-Fein argues, almost more unlikely: a near-instantaneous tripling of oil prices amidst a backdrop of rapid deindustrialization and deurbanization and the return of hundreds of thousands of under-skilled and often opiate-addicted veterans.

Dealt a less ruinous economic hand, New York might have—well, here’s where it’s impossible to know. Phillips-Fein argues, somewhat halfheartedly, that antagonism among the ruling classes toward what the ubiquitous banker/ power broker Felix Rohatyn called the city’s “lifestyle” created a false “sense that New York City’s problems were entirely its own fault.” This obscured the real causes of the crisis: the “dismantling of the urban manufacturing economy” and the “federal subsidies for homeownership and federal investment in highways” that had caused a giant sucking sound out of cities nationwide. Had Ford and his austerity-smitten advisors not been “so relentlessly hostile” to Mayor Abraham Beame’s pleas for a loan, Phillips-Fein writes, “New York might have had an easier time finding a way to renegotiate its debts” in a rational and systematic process that might even have redrawn city and suburban boundary lines to make more resources available for city governments.”

At the same time, Phillips-Fein acknowledges that as early as the 1920s the New York real-estate-development lobby, in its quest to drive industry away and recast the city as a gleaming habitat for the affluent, had hastened the precise situation—the exodus of middle-class factory workers to the suburbs and beyond—that she blames for defunding the city’s tax base. And as Naomi Klein’s account in The Shock Doctrine of Hurricane Katrina makes clear, genuine natural disasters are the bread and butter of the austerians: Isn’t it more likely that stagflation was simply the “natural disaster” the ruling class had been waiting for?

Certainly Mayor Beame, elected in 1973 on a fiscal responsibility platform, suspected as much. His predecessor had floated bonds to finance a deficit in every year of his second term; Beame, comptroller for those four years, had warned a “day of reckoning” would arrive. But every month or so the banks had nevertheless shown up without incident to roll over the city’s debt—until February 1975, when a “young banker” at Bankers Trust who had “never done a muni deal before” backed out of underwriting a $260 million debt offering.

The next week, no bankers showed up to bid on city bonds. What had changed? Beame had spent his first year in office scrambling to cut costs and raise tax revenue, and the banks had thanked him with a “cash boycott.” Their objective was neither specific nor quantifiable, he told City Council: It was to force the city to “move from programmed recovery to shock therapy.” Or, as Rohatyn put it, only “overkill”—gratuitous, symbolic cuts in services—was likely to satisfy the faceless investors spurning New York’s debt because its “way of life is disliked nationwide.”

Perhaps wisely, Phillips-Fein does not expend too much effort evaluating the extent to which the cash crunch (or its aftermath) was coordinated by the bankers and their allies. Conspiracy or no, New York was broke. But it’s remarkable to read her account of the bloodbath—in which the city’s elites slash the public payrolls indiscriminately without contingency plans— alongside the letters Milton Friedman wrote to the new Chilean dictator Augusto Pinochet that selfsame spring. Friedman outlined the tenets of what he termed the “shock treatment” required to undo the damage wrought by decades of democratic socialism: an immediate 25 percent cut via “across the board” layoffs because “any attempt to be selective is likely to be defeated.” New York shed 23.7 percent of its workers between 1975 and 1978, but Rohatyn considered it a great victory that cops and teachers and garbage collectors lost their jobs in equal proportions: “People … were willing to make real sacrifices as long as they believed that those sacrifices were relatively fairly distributed.” They were nothing of the sort, of course: within months of securing its federal bailout, the city coughed up a tax break now valued at $360 million to a then-29-year-old developer named Donald Trump.

And yet, as Phillips-Fein remarks in her epilogue, “One can imagine much worse outcomes.” It hardly requires an imagination, in 2017: public sector unions could have been essentially outlawed, as in Wisconsin; employees could have had their salaries summarily slashed to $7.25 an hour (Scranton, Pa.); citizens could have had their water bills jacked up to nearly $900 a year—for the luxury of drinking poisoned water (Flint, Mich.); death squads might have absconded with anyone who protested the cuts (Friedman/Pinochet’s Chile). Merely contemplating a modern American city with accessible healthcare, affordable housing, decent schools and a functioning transit system—now that requires imagination. If not for Fear City, I might have written it off as a pipe dream.