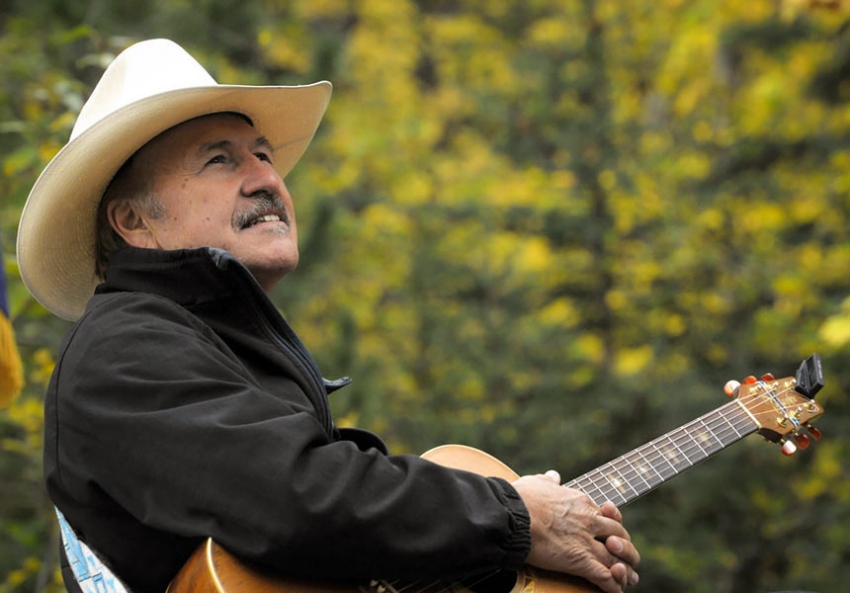 The Folk Singer vs. the Millionaire: A Berniecrat Aims for Montana’s House Seat

The Montana special election is a chance for Montana to show its stubborn independence and confound national expectations.

I first heard of Rob Quist last fall, when I saw him play in White Sulphur Springs, Mont., the conservative ranch town of 900 people where I grew up. Until recently, this is how most Montanans knew him: a folk musician they had seen in bars, gymnasiums and fairgrounds across the state. Quist grew up on a ranch outside the small town of Cut Bank, on the border of the Blackfeet Nation, and has made his living playing music since the 1970s.

Today, Quist tours the state in a different role—as a populist Democratic candidate to fill Montana’s sole House seat. He’s campaigning on a simple message: “You shouldn’t have to be a millionaire to hunt, fish and hike in our great outdoors, get a good education or be able to support your family.”

The May 25 special election—triggered when Republican Ryan Zinke resigned the seat to serve as Donald Trump’s secretary of the interior—will pit Quist against an actual millionaire. Greg Gianforte moved from the East Coast in 1995 to Bozeman, Mont., where he founded the software company RightNow Technologies. In 2011, he sold RightNow for more than $1.8 billion. He has poured money into conservative causes, including $6 million into his own failed gubernatorial campaign last year.

Many national commentators characterize Quist’s campaign as a quixotic longshot in “deep red” Montana. In a state that Hillary Clinton lost to Trump by 21 points, the conventional thinking goes, a Bernie Sanders-style Democrat stands little chance.

But Montana’s distaste for establishment Democrats like Clinton does not make it “deep red.” Of the Western states that went for Trump in November—Montana, Idaho, Wyoming, Utah and Arizona—all except Arizona went for Sanders in the primary. In Montana, it was not only urban liberal enclaves that voted for him. Of the state’s 45 counties with fewer than 10,000 registered voters, Sanders won 28.

On the same ballot in which they voted for Trump, Montanans also reelected Democratic Gov. Steve Bullock over Trump enthusiast Gianforte. In 2008, Barack Obama lost the state by only two points.

One good way to understand Montana’s political complexity is through the issue of public lands, which reflects class interests more than party loyalty. Despite a libertarian tendency to distrust the federal government, Montanans overwhelmingly support federal public lands. These lands—National Forests and National Parks, wilderness areas and Wild and Scenic Rivers— comprise more than 27 million acres in Montana, 29 percent of the state’s land base. And almost all of them are free to access, camp on, hunt and fish. Public land is one of the last egalitarian institutions in Montana—land where people of modest means can live as free as rich people, and fill their freezers for the price of a $20 elk tag and some bullets.

A post-election survey of Western states found that 88 percent of Montana voters favored “improving access to public lands.” Only 38 percent favored opening up new areas of public land to oil and gas drilling. Given such popular support, it wouldn’t seem that public lands are in need of much defense. But they are. Trump intends to increase oil and coal extraction on federal lands, and on April 26 signed an executive order that threatens national monuments. Nationwide, moneyed conservative groups like Americans for Prosperity and the Heritage Foundation are pushing to transfer federal public lands to the states, with the ultimate aim of privatization and ramped-up resource extraction.

In 2009, Gianforte sued the state to block a public access easement to the East Gallatin River near his property. The issue was resolved, but the incident cast Gianforte in the role of that most despised Montana character: the rich out-of-stater who buys up land and then locks Montanans out.

Quist, by contrast, has put public land defense at the center of his campaign. Sensing the threat, the GOP’s Congressional Leadership Fund has spent $700,000 on TV attack ads. One shows Quist—weathered face, mustache, cowboy hat—while a voiceover calls him “too liberal and out of touch for Montana,” an interesting charge from a D.C.-based super PAC against a man raised on the Montana Hi-Line.

National Democrats were slower to get involved, though they announced April 20 they would start putting money into the race. Their hesitance may actually help, says popular Montana politics blogger Don Pogreba, because Montanans are often skeptical of candidates with too many national party fingerprints. “To win in Montana, authenticity is really important,” he says.

He does worry that, with journalists failing to dig into Gianforte’s record, his high-dollar ad campaigns may prevail over Quist’s smaller budget and face-to-face campaigning style.

This is where Our Revolution, the advocacy organization that grew out of Sanders’ presidential run, comes in.

The group endorsed Quist, and Sanders himself said he’d campaign in Montana. According to board chair Larry Cohen, many of the 20,000 Montanans who have signed on to Our Revolution are making phone calls, texting and knocking on doors for Quist. The group has also connected Quist to the nationwide network of small donors that powered the Sanders campaign, helping raise nearly $1 million in March alone from more than 20,000 individual donations averaging $40 each.

The Montana special election, then, is a chance for Montana to show its stubborn independence and confound national expectations. It’s less a referendum on Trump and more a test of the radical idea behind Sanders’ run: that a volunteer-powered, small-donor-funded, populist campaign can overcome one backed by big money and a national party apparatus.