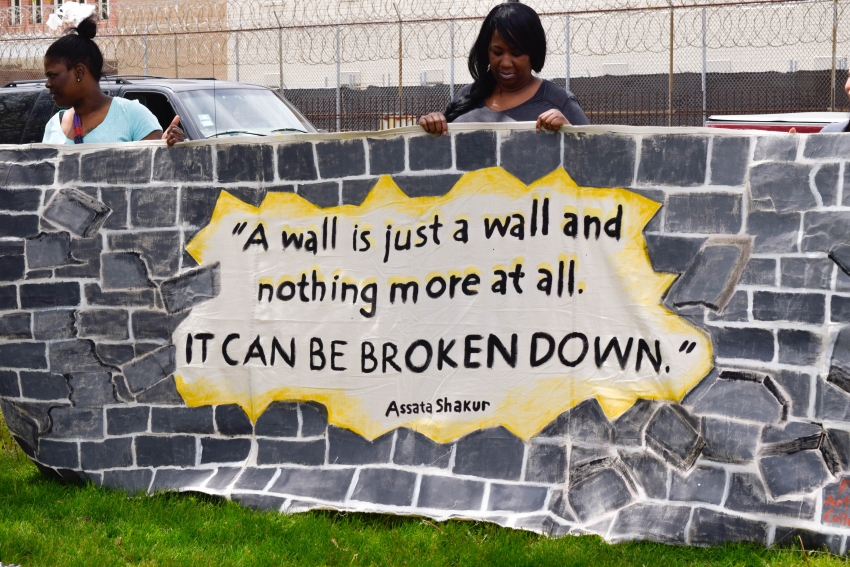 On May 13, Prison abolition organizers gathered near Cook County Jail in Chicago to rally awareness and support for incarcerated mothers on Mother's Day. (Elizabeth Adetiba)

A New Mother’s Day Tradition: Fighting for Moms Behind Bars

This weekend marked a surge of actions in the growing movement to support–and to free–incarcerated mothers.

One in nine Black children have had a parent incarcerated at some point during childhood.

On a warm and sunny Saturday afternoon, children chased each other in a grassy field while a crowd of 60 sang the chorus of “Ella’s Song,” by Sweet Honey in the Rock: “We who believe in freedom cannot rest until it comes.” Cars honked in recognition as they passed. But what may have appeared to be simply a Mother’s Day-weekend picnic was actually a vigil in solidarity with the many mothers locked up just steps away in the Cook County Jail.

Formerly incarcerated mother Monica Cosby, now an organizer with the Moms United Against Violence and Incarceration collective, told the crowd what it was like to spend over 15 years separated from her daughters.

“Years would go by where I wouldn't be able to talk to [my family] on the phone because it was so expensive,” an emotional Cosby said. “That's what happens when people wind up in prison. It destroys families. My family is still recovering—I'm still recovering, and I've been out here for about a year and a half.”

Cosby later told In These Times that after speaking at last year's rally, she didn’t think she could participate again. Being so close to the jail brought back painful memories.

But she steeled herself and came this Saturday, because, as she says, “I believe in the work we do as a community. … I want the women inside to know. … I needed to know while I was in prison that this was happening out here.”

One mother behind bars wrote to tell the group what the rally meant to her. Paris Knox is a young Black woman who was sentenced to 40 years in prison for killing an abusive partner. Her case is currently on appeal.

Knox’s mother, Debbie Buntin, delivered a touching letter from her Paris, who thanked everyone for their support. Afterward, the crowd chanted “We love you! We love you!” in support of both mother and daughter.

Doris Johnson, a volunteer with Cabrini Green Legal Aid, which offers free legal services to low-income Chicagoans, says she was moved to attend due to her own experiences of having loved ones behind bars. “I have a godson that's incarcerated, and my boys was incarcerated when they was younger,” she explained. “It's really a burden…sometimes they got accused of things that they didn't do. … I just want to do what I can to help [others].”

That sentiment was shared all over the country this Mother’s Day weekend, as the campaign to #BailOutBlackMamas took root in about 20 cities. Originally organized by SONG–Southerners on New Ground, a regional queer liberation organization—to take effect on Mother’s Day 2017, the group’s goal was to “bail out as many Black mamas as possible.” At least 50 mothers have been bailed out so far.

The female incarceration rate has skyrocketed over the past 35 years, at a rate of 700 percent between 1980 and 2014. Although that is primarily due to an increase in the imprisonment of white women, Black and Latinx woman remain disproportionately incarcerated, at two and 1.2 times the rate of white women, respectively. As SONG organizer Mary Hooks noted in an interview with Democracy Now! on Friday, one in nine Black children have had a parent incarcerated at some point during childhood.

“Our goal is to be able to free our people from these cages, using the traditions from our ancestors that bought each other’s collective freedom,” Hooks said.

Throughout the weekend, social media was flooded with pictures and videos of bailed-out mothers reuniting with their families, from Durham, N.C. to Atlanta. Efforts in Chicago were centered around Saturday’s vigil and Sunday’s “Reunification Ride”—a community-organized busing program that transports children to their incarcerated mothers for holiday visits.

The program was initially funded by the state of Illinois, but due to the state budget impasse, funding for the program has been halted. Community members have taken it upon themselves to crowdfund buses to help ensure that, at the very least, mothers and their children can be together on holidays like Mother’s Day, when it might be even more difficult to be without each other.

For Cosby, the need to help kids visit incarcerated mothers cannot be overstated. Due to distance and cost, Cosby’s interactions with her children were few and far between.

“While I was inside [Cook County Jail], I saw my daughters almost every week,” she explains. “It was through plexi-glass, but at least I got to see them. When I went to prison, I never saw them again. From 1998 to 2015 I saw my oldest daughter one time, and that was August 25, 2013. It was probably the most awesome day. The next most awesome day was the day that I got out of prison.”

Importantly, the #FreeOurMoms campaign in Chicago doesn’t stop at connecting biological mothers with their biological children. LaSaia Wade of the Black Trans Gender-Nonconforming Collective reminded the crowd of the need for an expanded understanding of motherhood. Not all mothers are those who give birth, particularly for those within the LGBTQ community, and not all mothers are women. Trans men, for example, can give birth to children while not taking the label of ‘mother.’ And for many gender-nonconforming youth who have estranged relationships with their biological parents, older trans women take up the mothering role.

As the vigil came to a close, a banner featuring a quote from Assata Shakur blew in the background, reminding all who were present that organizers' overarching goal of abolition was not out of the realm of possibility:

A wall is just a wall and nothing more at all. It can be broken down.

Elizabeth Adetiba is freelance writer based in New York. Her writing has appeared in The Huffington Post, Fusion, The Black Youth Project, and SB Nation.