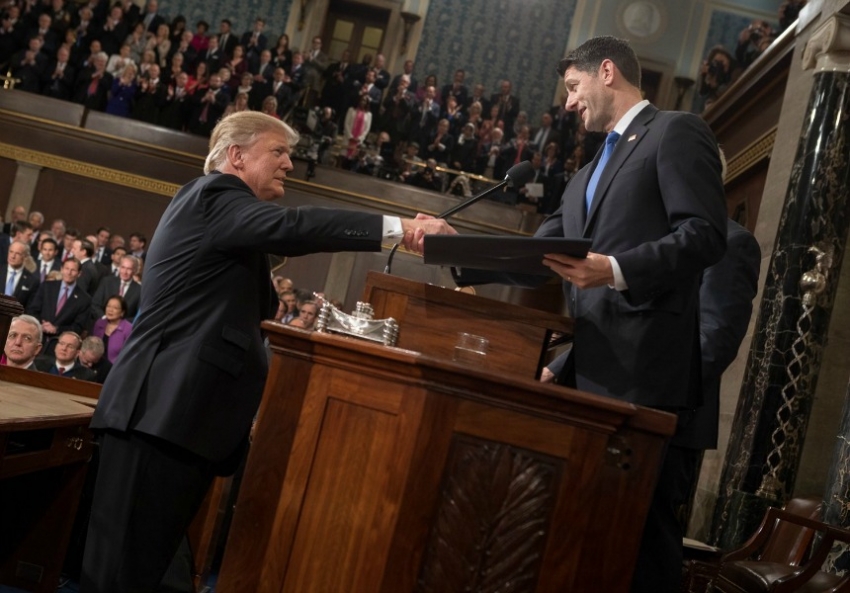 President Donald Trump and Speaker of the House Paul Ryan greet each other at a joint session of Congress on February 28, 2017. (Office of the Speaker)

To Impeach or Not To Impeach? That Is Not the Question.

The problems with the GOP are far greater than any one figurehead.

Progressives must remember—and point out publicly—that Trump is not the outlier but the spawn of the Republican Party.

The daily revelations of the entanglement of Trump’s entourage have Republicans squirming and Democrats salivating at the smell of blood in the water. Former boogeymen like the CIA and the FBI have suddenly become heroes to liberals. After years of relative quietude, Russia has emerged once again as the evil empire, as if we were living in the height of the Cold War.

Even progressives have not been immune, with thoughtful In These Times writers like Kate Aronoff and Jeff Alson spending their considerable brain power on weighing the danger, in the case of Alson, and benefit, as Aronoff sees it, of impeachment.

While the speculation is entertaining—and great for the bookmakers in Vegas—for progressives and others who take care about the future of the nation and the world, this almost singular focus on Trump and impeachment is both mistaken and dangerous. Like a horrific accident on the highway that commands everyone’s attention, Trump now serves as a dangerous distraction.

Consider this. Some of Trump’s egregious imperial actions, such as the travel ban targeting people from six Muslim-majority countries, have been hindered by large-scale protest. Yet, quietly and without much attention, the Republican Congress has already passed, and Trump has signed into law, pieces of legislation that threaten public health and welfare whatever Trump’s fate.

This Republican assault on our social fabric has already resulted in the following new laws:

And that’s just what’s now become the law of the land.

This year alone, 39 bills that restrict voting rights have been introduced in 22 states, with at least three states having adopted them into law, according to the Brennan Center for Justice. The future of a woman’s right to make her own reproductive choices is similarly imperiled. Already, state legislators have introduced 431 anti-abortion bills, with 88 bills on their way to passage in 28 states that would fully outlaw abortion or limit it so much that it is impossible to obtain.

We cannot ignore Trump or the policies he has and will continue to put forth. Every one of Trump’s retrograde and draconian executive actions or proposed policies needs to be called out, resisted, and defeated. But that must be the starting point, not the end of our thinking.

Whatever the Republicans (or the Democrats) may do about impeachment, progressives must remember—and point out publicly—that Trump is not the outlier but the spawn of the Republican Party and the policies it has espoused these past 15 or 40 years.

We need not only to change the occupant of the White House but the occupants of Congress and the state houses. If we fail to do so, in 2020, whether it is Pence or Trump who heads up the GOP presidential ticket, we will already have lost much of the progress made over the last century, and we will face the danger of gerrymandered districts yielding a president and Congress that look much the same as this one.

In Chicago, where I live and work, this has meant vigorous opposition to Trump. We turned out 250,000 people on January 21, flooded the airports when the travel ban emerged, and have been marching and protesting ever since. But it also means adding two more elements to our work: resisting the Republican agenda as well as the man, and turning protest into power.

This month the Illinois legislature passed a law that protects abortion in the event that the Supreme Court were to overturn Roe v. Wade and, critically, restores the right to abortion funding to both Medicaid recipients and state employees. The bill now sits on the Republican Gov. Bruce Rauner’s desk—hopefully like the sword of Damocles.

Demonstrations, marches, and massive call-ins to legislators’ offices were responsible for that victory. Ensuring that victory sticks will require turning political interest into action and transforming that participation into voter registration and then votes. This must all be done with the understanding that Trump is the symptom and not the cause of our problems.

It is tempting make common cause with those who would use Trump’s dalliance (real or imagined) with the Russians and his lies as sufficient cause for his ouster. And it may be that his ties and lies do him in. But progressives, eyes wide open, must remember that it is not an external enemy from whom we have the most to fear but, rather, an oligarchy that is all-too-eager and prepared to sacrifice a president to secure their agenda.

It is up to progressives inside and outside the Democratic Party to recognize and proclaim loudly that the solution lies not with Trump’s ouster, but with the creation of a peoples’ agenda powered by a well-informed, organized populace ready to do whatever it takes.