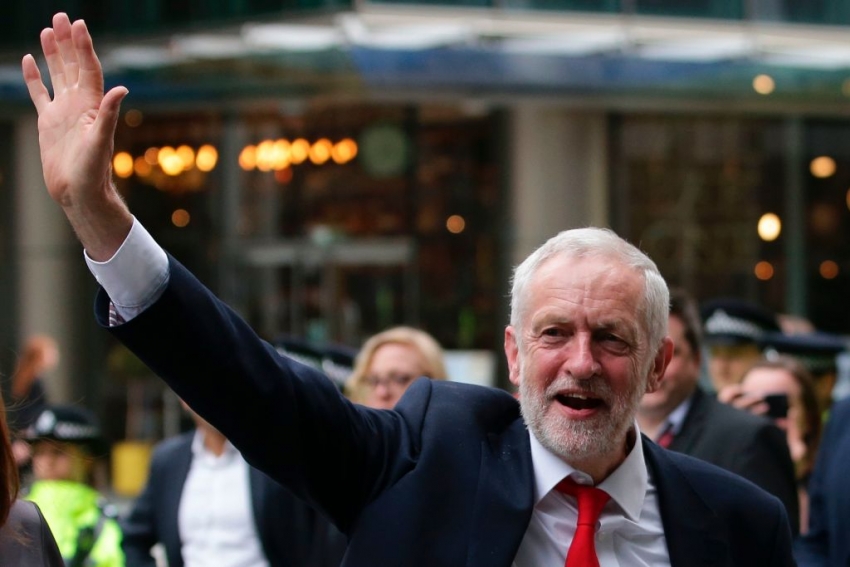 For better and for worse, politics is based primarily on giving people things—chief among them, hope. Labour delivered. (Photo credit should read DANIEL LEAL-OLIVAS/AFP/Getty Images)

The UK Elections or: How the Democrats Should Learn to Stop Worrying and Love Socialism

The Labour Party’s surprise showing is a teachable moment for those of us across the pond.

"In 2017, it’s socialism or barbarism and the British people just made their choice. Now the Democrats have to make theirs."

Here is a brief and wholly incomplete list of things included in the manifesto that Britain’s Labour Party ran on to rip the Tories’ overall Parliamentary majority out from under them:

This list goes on, and includes several more proposals that have long been considered third rail issues for American politicians afraid of offending both their donors and some fictional constituency of small business owners and people who eat at Panera Bread. Socialist ideas propelled the Labour Party from a beleaguered force that just months ago was losing safe Labour seats in a by-election to one that pulled off what might be the British left’s biggest political upset in a generation or more. As a statement from a party spokesman put it, “It looks like the Tories have been punished for taking the British people for granted.”

Democrats can either take that message to heart—and stop taking the American people for granted—or wither into irrelevancy.

Already there are pundits on this side of the pond attempting to explain away what happened. Zack Beauchamp at Vox chalked up the upset mainly to Theresa May's incompetence on the campaign trail and—secondarily—to Jeremy Corbyn’s skill on it. “There’s also some reason to believe that Corbyn’s ideas may have energized new voters,” he admits, but adds, “We can’t be sure that this theory is true: We’ll need a lot more data and fine-grained analysis to be certain about this kind of result.”

There’s no disputing that May helped run her own electoral chances into the ground, floating dystopian-sounding cuts like the so-called “dementia tax.” It's also true that Corbyn is a gifted campaigner with a massive base of support in Britain. Especially for Americans, though, the takeaway from yesterday’s election results in the UK shouldn’t be that Corbyn’s rousing speeches and mum-knit sweaters, alone, are what brought Labour back from what could have become its death bed. If that were the case, then what happened there could never happen here.

But it’s not the case at all. It wasn’t simply a cult of personality that brought May down, but also the nuts-and-bolts of grassroots politics and the popularity of redistributive policies. For one, there was a small army of people who worked very hard—going door-to-door, manning phone banking sessions around the clock, setting up Tinder bots—to almost completely turn around what was predicted to be an electoral annihilation for Labour when May called for the snap election on April 18. Momentum, formed out of the grassroots campaign that got Corbyn elected as Labour’s leader in 2015, has worked for the last two years to build both local chapters and issue-based campaigns, and to fend off attacks from Labour’s right.

Crucially, these hordes of organizers and volunteers were helping run a campaign premised on a vision for a fairer and more democratic Britain: Where everyone is entitled to healthcare and education, where utility CEOs don’t get to determine whether you have heat for the month, where water isn't poisoned to line the pockets of a handful of executives, where the world the next generation inherits isn’t defined by climate catastrophe. For better and for worse, politics is based primarily on giving people things—chief among them, hope. Labour delivered.

Democrats, conversely, have spent the last several decades filing egalitarian policies down to means and focus group-tested shells of themselves: Free education—but only to those within certain income brackets. Free healthcare—but only for the elderly, disabled and very poor. Relatedly, the same party has spent the last several decades shedding poor and working class voters while taking voters of color for granted, directing its policies and proposals toward an imaginary center.

It’s been nearly a year since Clinton stalwarts like Carol Browner positioned themselves as the Democrats’ voice of reason when striking down Sanders surrogates’ proposals to ban fracking and embrace single-payer healthcare at the Democratic Party platform drafting committee last summer. In a statement on the meetings, which came on the heels of Brexit, Sanders wrote that, “It is imperative that this platform be not only the most progressive in the history of the Democratic Party, but includes a set of policies that will be fought for and implemented by Democratic elected officials.”

Hillary Clinton’s historic defeat should have been a wake-up call that Sanders was right. Hyper-focusing on smaller and smaller chunks of the electorate, apportioning public goods out to smaller and smaller groups of people, is a losing strategy. If November 8th couldn’t make that case to the Democratic establishment then June 8th should.

Socialist ideas are popular and can win. Policies long considered radical are now popular, and may well be the only chance we have to beat back the Trumpian right. Sixty-six percent of Americans support raising the federal minimum wage to above $10 an hour. Sixty-one believe the rich pay too little come tax season. Fifty-eight percent believe in universal healthcare. Seventy-two percent agree that the United States should take “aggressive” action to curb climate change. That’s why Sanders managed to stir up 13 million votes for democratic socialism and why he—arguably—would have won—and did among the same demographics (millennials, mainly) that helped carry Labour up from expected defeat yesterday.

In 2017, it’s socialism or barbarism and the British people just made their choice. Now the Democrats have to make theirs.