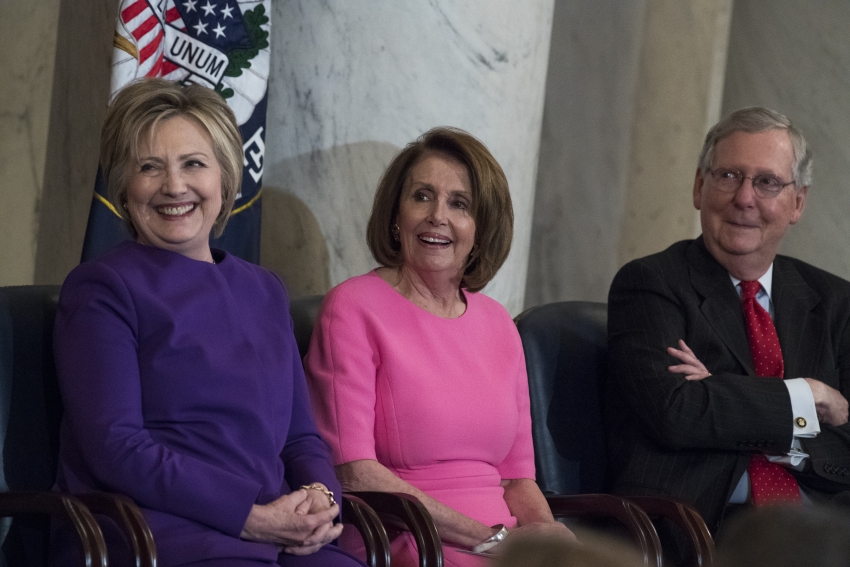 Going ‘back to the center’ and curbing climate change are mutually exclusive.

Curbing climate change requires a fundamental rethinking of our economic system and the role of the state in orchestrating it.

At this point in the news cycle, saying Mark Penn and Andrew Stein’s op-ed in the New York Times yesterday was a hot mess is a cold take. Liberals and leftists both seem to agree that Democrats shouldn’t take the advice of the man who oversaw Hillary Clinton’s doomed and xenophobic 2008 primary bid and a tax-evader-turned-Trump supporter, respectively. Among their suggestions are to “reject socialist ideas” and tack right, embracing reforms like 1996’s disastrous welfare reform package.

But Penn and Stein weren’t alone this week in offering maligned guidance about the Democrats’ path forward. A sticker-choosing poll from the Democratic Congressional Campaign Committee (DCCC)—which apparently has nothing better to do—floated swag featuring the slogan, “Have you seen the other guys?” (To be fair, the line pretty accurately sums up the strategy behind Clinton’s 2016 presidential campaign.)

Then there’s “Win The Future” (“WTF” colloquially, obnoxiously), the brainchild of Silicon Valley mega-donors who want to disrupt the Democrats into becoming more “pro-business,” which has clearly been the missing ingredient in the party’s strategy these last several years. Their plan? Crowd-source ideas via Twitter and put them on billboards around Washington D.C—‘where politicians can see them!’

Individually, all these ideas seem to lack much in the way of strategic merit. Taken together, they spell out a good case for why we shouldn’t take anyone seriously who wants to defend the center from a leftward drift.

So, what made anyone think this kind of thinking was smart in the first place? Because they managed to win elections for a time, centrists painted themselves as the Machiavellians who rebranded Britain’s Labour Party to beat the Tories and turned Democrats into the party of welfare reform, winning over moderate Republican voters in the process.

Politics, of course, has changed a lot since the days of Bill Clinton and Tony Blair. The Democrats have lost 1,000 seats since 2008, and not—as Penn and Stein argue—because Bernie Sanders ran in the 2016 Democratic primary. Labour was humiliated at the polls by Tories and rapidly lost members until recently, when Jeremy Corbyn’s openly left wing of the party started to pull it back to its working-class, socialist origins and win back seats and grassroots appeal because of it. Bernie Sanders is also America’s most popular politician.

Faced with a choice between socialism and barbarism, defenders of the center are devolving into sad fan fictions about Justin Trudeau, Emmanuel Macron and Angela Merkel forming a Justice League animated by colorful socks and a zeal for free-trade policies. After years of infantilizing the left as unrealistic dreamers, a substratum of pollsters, washed-up politicians and media personalities are clinging on to the idea that a few telegenic heads of state and an elusive silver bullet from the FBI’s Russia investigation will bring Trump and the rising far-right tide he represents crumbling down.

There’s another problem with this kind of magical thinking, beyond it being manifestly out of touch with political reality: It might get us all killed.

Curbing climate change requires a fundamental rethinking of our economic system and the role of the state in orchestrating it. Just last week, the United Nations warned that we have just three years to keep the world from warming beyond two degrees Celsius, a threshold that—if passed—could leave major coastal cities underwater and fuel geopolitical conflict worldwide. Preventing that in the United States alone will mean a rapid scale down (likely via nationalization) of coal, oil and natural gas companies, the state commandeering companies to phase out combustion-powered cars almost immediately and investing trillions of dollars in public funding to revolutionize the country’s outmoded grid system. And that’s just for starters.

All of this flies in the face of a centrists’ advice about reigning in spending and keeping the government’s role in industry to a minimum. The prescription physics lays out, on the other hand, couldn’t be clearer: socialism, or something damn near close to it—including a lot of the things Penn and Stein suggest rejecting.

The sheer physical reality of climate change might be the best argument against believing a damn word these guys say.