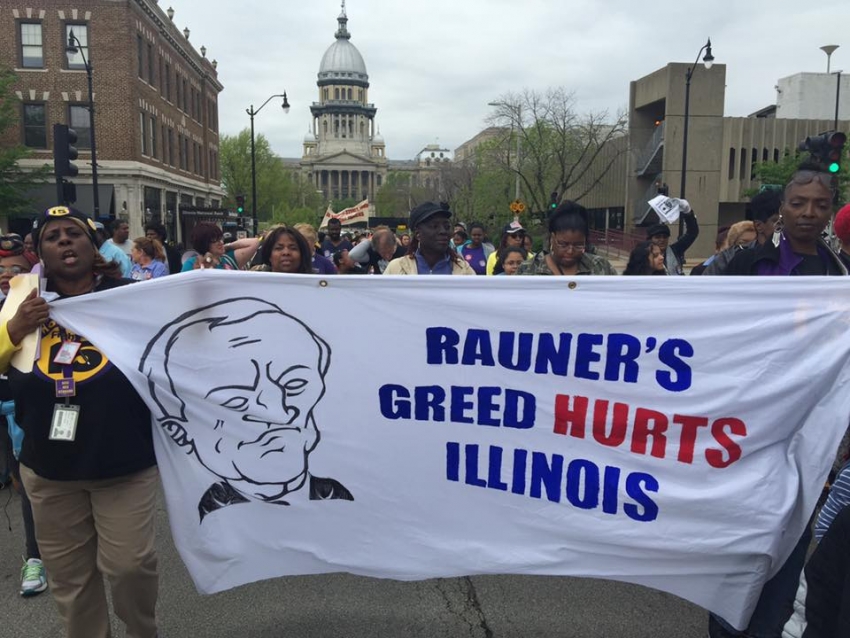 Holding Your Ground Against Austerity: Lessons from the Illinois Budget Deal

Progressive movements didn’t back down in the face of a right-wing ideologue.

We’ve made important strides towards a bold vision. What we still need to do is build the power to fully achieve that vision, by organizing with people in all parts of Illinois.

Like a tornado, right-wing ideologues have swept through statehouses across the Midwest leaving devastation in their wake. Scott Walker in Wisconsin, Mike Pence in Indiana and Bruce Rauner in Illinois came into office with dreams of slashing government services and destroying worker protections. In order to implement their austerity agendas, they worked to create crisis and chaos.

In Illinois, residents experienced this strategy firsthand during a historic budget impasse that made national headlines. Gov. Rauner held the state hostage in an attempt to force the legislature to pass his austerity agenda. As a result, over one million Illinois residents lost access to critical services. Rape crisis centers were shut down, seniors were forced into nursing homes, homeless families were turned away from shelters and young people lost access to life-saving, anti-violence programs.

A collapsing social service and public education infrastructure was exactly what Rauner wanted. The governor made his fortune, in large part, by taking over corporations and breaking them into pieces: Destruction is his formula for profit. He issued extreme demands, including insisting on multiple state constitutional amendments in exchange for a budget. However, this strategy didn’t work. After three long years, members of his own party defected this month, allowing the Illinois legislature to override his veto of the state budget and to finally end the impasse.

The budget that passed falls short. It insufficiently funds many critical services, cutting $3 billion from current spending levels, according to state Rep. Greg Harris. Furthermore, it relies on Illinois families to foot the bill by imposing an increase in the state’s flat tax instead of requiring the wealthy to pay their fair share. Only two very modest corporate loopholes were closed. Progressive revenue solutions—such as closing the carried interest loophole, closing significant corporate loopholes, or implementing a progressive tax structure—remain sidelined.

This means that, for now, Illinois will continue to have one of the most unfair tax systems in the country, in which low and middle income families pay a greater percentage of their income than the state’s most wealthy residents. Even though Rauner was unsuccessful in perpetuating the impasse, his fingerprints can be seen all over the final product of an austerity budget.

To build statewide power in the face of austerity, organizers need to do two things: craft a bold vision for full funding under a rights framework and build the electoral power that demands that vision. In Illinois, we’ve made real progress, creating a People’s Agenda laying out our vision of where we need to get to, making the bold demands for what our communities have the right to, and building coalitions willing to move the ball forward when progress seems impossible.

Instead of caving to lowered expectations, Illinois residents came together like never before. Social-service providers who normally remain apolitical rallied in the streets, not to advocate for one budget line item over another, but to say the wealthy should pay their fair share so we can expand services instead of cutting them. A group of residents being hurt by the budget impasse marched 200 miles to Springfield. Unions strengthened alliances with community organizations. The Grassroots Collaborative, Fair Economy Illinois, Illinois Coalition for Immigrant and Refugee Rights, Grassroots Education Movement, the Fight for 15 and others advanced aspirational demands during a period that could have easily been purely defensive.

In the midst of the crisis and chaos created by Governor Rauner, we pushed an Illinois progressive agenda farther than ever before and made historic progress. Illinois became the first state to pass a $15 minimum wage in both the upper and lower houses. The Illinois Senate passed a bill to close the carried interest loophole by placing a privilege tax on Wall Street money managers, becoming the first legislative body in the country to do so. Together, a broad coalition passed a bill to give Chicago an elected representative school board, something that Chicago parents have been demanding for decades. The General Assembly also passed the Illinois Trust Act that would expand protections of Illinois immigrant community running directly counter to Governor Rauner’s anti-immigrant anti-refugee policies.

We’ve made important strides towards a bold vision. What we still need to do is build the power to fully achieve that vision, by organizing with people in all parts of Illinois. To this end, Grassroots Collaborative is experimenting with building progressive statewide infrastructure, beginning with developing grassroots leaders and engaging sporadic voters of color in Peoria. Working families, women and people of color must be at the center of our agenda. And unless we build meaningful relationships across the state, Rauner will continue to manipulate a racist anti-Chicago narrative, and keep the state divided against itself.

There is still much work to do. Many of the bills we’ve passed are still at risk of being vetoed by Rauner. Illinois will still not be able to make the needed investment in our people unless we win more progressive revenue. But the strides made during the Illinois budget impasse should be a lesson to all of us operating in states run by right-wing ideologues like Rauner. We cannot make progress without issuing bold demands for what our communities need. And we can’t win our bold visions without building formidable grassroots power that demands a new way forward. That is the big task that lies before all of us as we head into the 2018 elections.