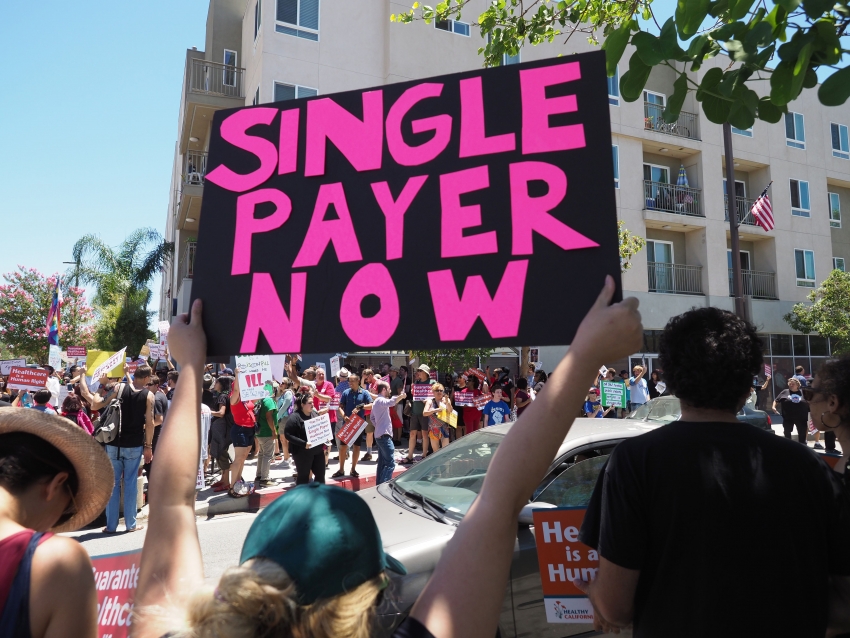 Spare Us Your Technocratic Handwringing Over Single Payer: This is Life and Death

The battle for single payer in California is an opportunity to make historic investments in both healthcare and education. We can’t pass it up.

We should make the moral case for single payer, utilizing the history of our social welfare system to argue that things can be done better.

This week we witnessed the collapse of the Republican healthcare bill in the Senate, effectively killing the effort to repeal and replace Obamacare for the near term. While the GOP’s likely defeat will save health insurance for tens of millions of Americans, the current system under Obamacare still leaves millions uninsured and has led to increases in healthcare costs for Americans across the board. And President Trump has maintained that his goal is to let the entire system fail, as insurers continue to pull out of the exchanges.

In the midst of this healthcare crisis, a number of states have been pursuing their own plans to expand healthcare coverage through implementing single-payer systems. One of the most dramatic efforts took place in California, where a single-payer plan passed the State Senate in early June, buoyed by grassroots organizing and support by groups like the California Nurses Association.

However, on June 23, the dream of universal, single-payer healthcare in California was put on indefinite hold when Anthony Rendon, the Speaker of the California State Assembly, announced that Senate Bill 562 would remain stuck in the Rules Committee “until further notice,” essentially killing the bill.

In a recent article for The Intercept, David Dayen lists the many obstacles Rendon and Democrats in the California State Legislature face in attempting to make single-payer a reality, and uses these obstacles to justify lawmakers’ failure to enact universal healthcare. But such a technocratic explanation obscures the enormous energy behind the campaign for single-payer in the state—and the importance of continuing to push forward with the demand.

The biggest hurdle Dayen identifies is Proposition 98, a measure that requires at least 39 percent of the state’s budget to be spent on primary school through community college education.

Because of the requirements in Prop 98, any increase in spending on healthcare would also have to contain an additional bump in funding for education to keep the state budget constitutional. Gov. Jerry Brown signed the 2017 to 2018 state budget in late June, which totaled $183 billion. The most-friendly estimate of implementing single payer in California—the world’s sixth-largest economy—puts the cost at $331 billion. Prop 98 would require an additional $207 billion be allocated for public education, bringing the state’s budget to a total of $721 billion. Local, state and federal funds could be put towards that plan, but that would only cover $200 billion. The rest would have to come from additional sources of revenue.

Dayen paints these costs as a barrier to implementing single-payer policies. Rather than viewing this need to increase revenue as an obstacle, however, Democrats and progressives of all stripes should see this as an opportunity for a historic investment in the well-being of communities across California.

A near quadrupling of the state budget would certainly have its opponents. After all, the reason that Prop 98 was approved by voters in 1988 was due to the restrictions on local property taxes—a prominent form of school funding in the United States—caused by the passage of Proposition 13 ten years earlier. That proposition—which required support by a two-thirds majority of voters for local tax increases and capped the increases at two percent—dramatically reduced localities’ ability to pay for infrastructure and education needs.

But none of these budgetary restrictions change the fact that Californians overwhelmingly approve of universal health care as a concept, even if that support drops slightly when they are asked whether they would be willing to pay higher taxes to achieve it. And this plan would undoubtedly require higher taxes to fulfill the revenue requirements.

The State Senate’s Appropriations Committee has already recommended an increase of the payroll tax to 15 percent in order to fund the single-payer plan. Additional means of taxation could include implementing a millionaire’s tax, as well as a financial transactions tax on bonds and other commodities, which California Democrats already passed a resolution supporting at their 2011 state convention.

Long-term, a campaign should also begin to repeal Prop 13 and end the hamstring that the law places on the ability of local government to raise money for programs like public education.

The first task is clear: California voters must be convinced of the necessity of paying higher taxes in order to ensure everyone is guaranteed healthcare. How do we do that?

Arguments centered around “efficiencies” and “savings” are losing ones, as they accept the terms that conservatives set out for the debate.

We should instead make the moral case for single payer, utilizing the history of our social welfare system to argue that things can be done better. Such an argument would see people as not just “taxpayers,” but humans deserving of healthcare as a right.

Social welfare in the United States, while built on a sense of moral obligation to fellow citizens, has always been a story of gaps, holes, and half-measures. Modern-era public housing was created with the Housing Act of 1949, but it placed the burden of maintenance and upkeep on local housing authorities and the rents of low-income tenants.

Cash assistance programs have existed since the New Deal, but they are now woefully inadequate for even working low-income families to live on, and many states only provide families with two years of assistance before ending their assistance for life.

The story is similar when it comes to healthcare policy. The Affordable Care Act (ACA) was initially intended to end the crisis of uninsured Americans. But after the public option was stripped from the bill, achieving such goals became a pipe dream, as the profit-driven, private insurance market remained the dominant force in U.S. healthcare.

A recent Kaiser Health study found that Americans who buy their health insurance on the exchanges set up by the ACA spend up to 25 percent of their income on healthcare costs. Purchases on the exchanges are subsidized to a degree by the federal government, yet getting sick can still mean financial distress for families. And if you are one of the 11.3 percent of Americans without health insurance—which is up since the end of last year—financial precarity is a certainty should you fall ill.

People are dying and going broke because of a healthcare system that is based on profit rather than promoting the health and well-being of society. The fact that working class Americans are being reduced to crowdfunding their health expenses cuts against any sense of equality and justice.

Our country also faces an inequality crisis when it comes to education. Most states have cut education funding in the wake of the Great Recession and funding from local sources has not been enough to make up the difference. Add to this the cuts states have been made to municipalities in the form of local government aid, and we face a dire predicament for our nation’s school districts.

This brings us to the second argument in favor of what would likely be the largest surge in state government spending in the history of the United States: Do it for the children.

We should view this as a life-cycle argument. Pregnant women would be able to get the full range of prenatal care and parenting support that they need in order to have healthy children. The children would be born in a state with well-funded health and education systems, with free pre-kindergarten programs, school meals, and access to child development programs.

This is an argument for investing in the future of California’s communities and breaking the logic of austerity that has savaged social spending at the state and local levels across the country. The Golden State has a storied history as a national trendsetter in politics and policy. The push for single-payer is an opportunity for the state to again lead the way by proving that egalitarian policies are not just popular—they save people’s lives.