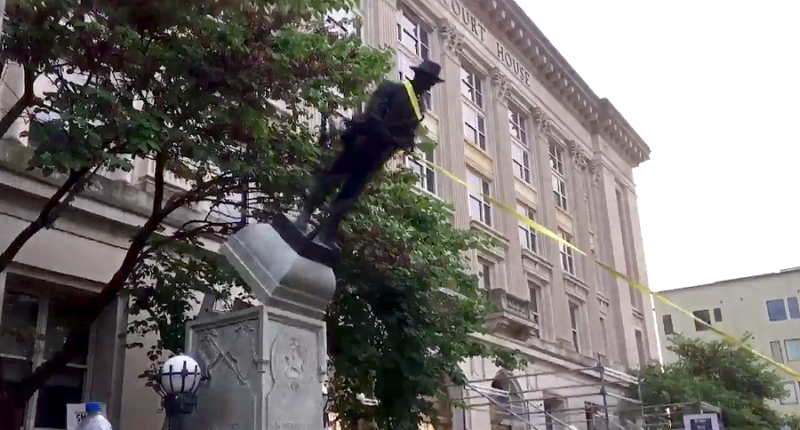 Protesters pulled down a statue of a Confederate soldier outside of the Durham County Courthouse on August 14, 2017. (Screengrab)

If You Support the Durham Freedom Fighters, Now Is the Time to Have Their Backs

Organizer Angaza Laughinghouse on the wave of retaliation following the toppling of a Confederate monument.

There is a long history of white supremacist violence, since that is what they have always done.

In the wake of the white supremacist attacks on Charlottesville, Va. this weekend, protests sprang up around the country. In North Carolina, a place laden with its own history of white supremacist violence, protesters pulled down a statue of a Confederate soldier outside of the Durham County Courthouse. Arrests and raids on activists’ homes followed—so have further protests in solidarity with those who took down the statue. On Thursday morning, hundreds attempted to march on the jail and turn themselves in to protest the arrests and call for charges to be dropped.

I spoke with Angaza Laughinghouse, long-time organizer in the area. He talks about the protests, the long fight against white supremacy in the South, and workers’ role in that struggle.

We had no public libraries in Greenville for the black community. We couldn’t cross over the line on Boundary Street to get to any of the facilities. There was no equal access to public facilities at all when I was growing up for part of my life in Greenville, North Carolina.

Sarah: In North Carolina, following the events in Charlottesville this weekend, people took it upon themselves to remove the Confederate statue in Durham. Tell us a little bit about what happened and the aftermath of that.

Angaza: Obviously, people were angered Friday night when they saw those people marching around with those torches—shouting those racist, white supremacist chants. We knew right then and there that that couldn’t happen without more people being engaged in this discussion and this fight to challenge this growing right-wing popular movement—this white supremacist movement. Discussion started that weekend. By the time Saturday rolled around, everybody was on the phone and sending emails and texts communicating that this cannot stand without us responding to the death of our comrade there who was murdered and the people who were injured.

Then, later on, people were communicating about the young black man who was beaten when he went to the parking garage to retrieve his car. In that moment, people began saying that we’d have to mobilize across the state of North Carolina to tell them, to tell the world, that we weren’t going to let these fascist Nazis, white supremacists and white nationalists just murder and injure and rally their forces to push this historic white supremacist outlook.

That Sunday, we began planning the activity in Durham. We began planning, also, another activity in Raleigh. In Raleigh, we had a candlelight vigil in front of the Dr. Martin Luther King Jr. statue in the heart of the black community. About 900 people gathered to mourn the death of our comrade who was murdered and recognize the 19 people who were injured.

Durham, as you know, had the other activity. Initially we rallied to show some solidarity in action in terms of the freedom fighters that were attacked. It had a great impact on the community here. We talked about it.

Sarah: After the rally in Durham and the statue being pulled down, I understand there have been arrests and that the police have been raiding people’s homes. Can you tell us a little bit about what has been happening?

Angaza: At the press conference held the following day after the statue was pulled down, there was a press conference and two undercover agents approached Takiyah Thompson of North Carolina Central University—a black student and long-time activist with several of the leading organizations that are a part of building a broader people’s assembly. They just came and they asked her, “Are you Takiyah Thompson?” She said, “Yes.” They arrested her for the incident that had occurred. There was a group of people who surrounded her immediately after the press conference, and they walked with her and told her, “We love you and we have got your back” as she approached the undercover car that they put her in after they handcuffed her.

The following day they continued to round up individuals. One is a lawyer, Peter Gilbert, and one is a union organizer, Dante Strobino, and others. They are continuing to round up as we speak, picking them up. We are fortunate that we have a long history of working together in this community. We were able to acquire the legal services of a well-known social justice and criminal lawyer by the name of Scott Holmes. He is helping us get them out and process them as we try to pull together a team of lawyers to represent these freedom fighters that took down the statue.

Sarah: The governor, who is now a Democrat, said that these statues should come down in the wake of this, right?

Angaza: Yes. Yesterday, Governor Roy Cooper came out with an actual press statement outlining steps for the removal of all Confederate statues from state property. The former Republican administration of Pat McCrory passed a law that states that they cannot move, replace or relocate any of these historical confederate statues from any state property. The governor wants to repeal this law that was passed by the majority-Republican state legislature. The state legislature pushed through the North Carolina House of Representatives a bill that states that they will not hold liable any driver driving a vehicle through any these protests. The governor is urging the State Senate not to pass this bill and said that we need to make sure people don’t drive through demonstrations.

Sarah: You were telling me that you have experienced that, when you are organizing, people try to run you down with a car.

Angaza: As a union, we often go to workplaces, whether it is street maintenance sites or the sanitation yard, usually in areas where people have to drive down a road to get into their workplaces or pick up their trucks. While we are handing out the flyers, oftentimes some of the people who have white supremacist ideas and are union haters will say, “You goddamned union communist organizer.”

It is not just a question of protests and rallies. In the “right-to-work” South, where less than 3 percent of all workers in North Carolina are unionized, there is a lot of anti-union feeling. This white supremacist thinking is institutionalized. It is everywhere: in history, in the workplace. Part of the anti-union right to work climate. White supremacists are now calling the county government and telling them to prosecute these folks who pulled down the statue to the fullest extent of the law. It is not just a few crazies as some people want to write it off.

Sarah: Could you tell us a little bit more about your history in North Carolina? You have been confronting this stuff for a long time.

Angaza: Well, I haven’t been confronting it for a long time, but black people certainly have been confronting this for hundreds and hundreds of years. Whether it was lynchings or whether it was the Wilmington Riots of 1898, where the white supremacists came and they burned down a black newspaper, black businesses and murdered and slaughtered black people in Wilmington, North Carolina.

I have been here in North Carolina every summer of my life since I was born in 1952. What brought me back was the murder of those five union organizers and political activists in Greensboro. This was the historic Greensboro Massacre of November 3, 1979, when the Klan came into a black community known as Morningside Heights and gunned down five community and union organizers who were having a rally there. There is a long history.

Also, there is a lawyer working down in rural areas, particularly Newton Grove, Johnson County and what we call the Black Belt region, where the African Americans. It was very apparent the role that these white supremacists played in intimidating the workers. They would cheat them out of their wages, they would work them overtime without paying them, spray the fields with pesticides knowing the workers were still working in the fields. It shows just how this white supremacist ideology devalues black lives.

Angaza: One of the things we are asking people to do is call the district attorney in Durham County, dial 919-808-3010. We are asking them to tell whoever answers the phone to drop the charges on the freedom fighters that took down the statue. The other thing we are doing is we are asking people to please donate. If they go online to the Durham Solidarity Center Freedom Fighters Fund, they can donate towards the legal representation of the people who took the statues down.

In light of what is happening in our workplaces, I think we have to take up this discussion of why all workers have to make every effort to defeat white supremacy: this white nationalist and neo-fascist popular moment that is developing. It keeps workers divided in our workplaces so we can’t unionize and win basic rights and better conditions and wages in our workplace. Many of us have heard about the recent loss down in Mississippi with the United Auto Workers Union organizing of the Nissan plant down there in Mississippi. It is just very important to take time out to see how this impacts our workplace.