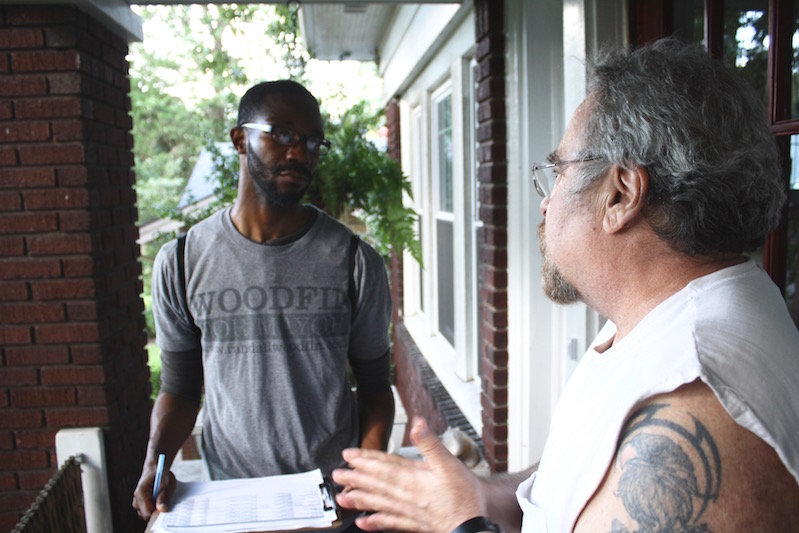 Woodfin has gotten a lot of attention for being a soft-spoken, bearded bachelor with a hyper progressive platform. But he’s also comfortable being himself with people. It’s a contagious trait. Woodfin says it’s his method: “Nobody lies at their own house.”

UPDATE: Randall Woodfin led a 12-candidate field in Tuesday's election, winning 41 percent of the vote. Two-term incumbent William Bell captured 37 percent. Since neither candidate reached the 50 percent required to win, the two men will face off in an October 3 runoff.

Mike Hamilton opens his door in a sleeveless Harley Davidson shirt. He’s got a shaggy goatee and a big grin. “Randall Woodfin!” the 63-year-old web developer says before any introductions.

It’s a Wednesday afternoon in Glen Iris, a diversely populated historic neighborhood south of downtown Birmingham, and I wonder if I’m being duped. Woodfin is smiling, too. He swears the day’s canvass isn’t staged.

Woodfin, the 36-year-old city prosecutor and former Birmingham board of education president, is in his first run for mayor, and he’s got support from organizations like Collective PAC and Our Revolution.

Our Revolution president and former Ohio state Sen. Nina Turner told me over the phone that Woodfin understands revolution happens “one neighborhood, one community, one city, one street” at a time. Birmingham is one of two dozen cities—several of them in red states—where Our Revolution, an outgrowth of the Bernie Sanders campaign, has endorsed candidates for upcoming local elections. On Saturday, Turner flew in for a get-out-the-vote rally in Birmingham.

The backing of national progressive groups, plus Woodfin's impressive ground game, could be enough to pull off an upset against two-term incumbent William Bell in Birmingham’s election on Tuesday. Hamilton is the third die-hard supporter we’ve met in an hour.

Like so many U.S. cities, Birmingham is experiencing reverse white flight and what Woodfin calls “pocket growth” limited to the city’s center. In a city where 72.9 percent of 212,000 residents are Black, Woodfin and Bell, both Black Democrats, are leading a 12-candidate, nonpartisan race. Tension has been high in debates as Woodfin accuses Bell of focusing on downtown and abusing tax dollars at the expense of most residents. In the most recent debate, as Woodfin and Bell blamed one another for failing schools, Woodfin pointed out Bell only allotted $1.8 million of the $428 million city budget to education. “Check your priorities. The current administration has never been committed to education in this city, period,” Woodfin told the audience.

“The city of Birmingham is only defined by its lowest quality of life neighborhood,” Woodfin says as we walk through the neighborhood again, sweating through his jeans and T-shirt, clipboard in hand.

Of Birmingham’s 99 neighborhoods, he says 88 are experiencing low quality of life issues: unsafe streets, low-performing schools, no access to groceries. Woodfin criticizes Bell for ignoring increasing poverty and crime rates. The mayor denies these critiques in debates, standing by his goal to increase revenue through downtown investment.

Woodfin has other plans for tax dollars. His platform is being lauded by progressives for addressing crime and poverty by advocating debt-free community college tuition and a youth summer jobs program inspired by the late Marion Barry, the District of Columbia mayor whose own federally-funded jobs program is as old as Woodfin. He also wants to re-open community centers closed during Bell’s tenure and invest in minority and woman-owned businesses. Woodfin tells me his programs are a reflection of what he’s heard from voters at their doors.

Since February, Woodfin says his team has knocked on 40,000 doors, making contact with 15,000 people.

“If we couldn’t raise one dollar, we’re still free to go knock on doors.” He’s raised more than $310,000 with nearly 3,000 individual contributions and the help of 600 volunteers, says political strategist Calvin Harris via email. As we walk toward Green Springs Ave., there’s proof of past visits: Woodfin yard signs and faded door hangers.

We meet a middle-aged woman with a foyer full of tail-wagging dogs. She’s undecided and asks Woodfin about his platform. “Are you gonna fight for LGBT rights?” (Because of where she works, she isn’t comfortable going on the record about LGBT issues.) Woodfin tells her his plans to hire a liaison at city hall for the LGBT community to address what he sees as human rights issues.

She asks what he plans to do about the city’s blight, the thousands of overgrown lots and dilapidated houses, and he tells her the city has to stop being a “slumlord.” (In a campaign video, you can watch Woodfin visit his devastated childhood neighborhood, where residents live in an environmental nightmare because of their exposure to nearby industrial waste.)

Once he’s satisfied her questions, the talk turns to what her dogs’ names are, what she does for a living, the admiration of a mutual acquaintance. They talk briefly about Charlottesville and Confederate monuments. After a few minutes, she’s recommending he read The Politics of Rage, about George Wallace’s impact on new conservatism, and Woodfin is giving her a high-five good-bye.

Woodfin has gotten a lot of attention for being a soft-spoken, bearded bachelor with a hyper progressive platform. But he’s also comfortable being himself with people. It’s a contagious trait. Woodfin says it’s his method: “Nobody lies at their own house.”

Some of the other volunteers give us an address to go see a 92-year-old they met early in the afternoon. We’re in my car, and Woodfin apologizes for having to take a call. He’s helping with funeral arrangements for his 17-year-old nephew, who was shot and killed earlier in the week. The boy’s father, Woodfin’s older brother, was shot and killed five years ago. Woodfin doesn’t shy away from his family’s grief, nor does he claim to be the only one suffering. In that last debate, he told the audience, “there are too many grieving families in our city.”

When we arrive at the woman’s house, her son is changing the oil of his Corolla in the front yard. Ninety-two-year-old Rose Antonio comes onto her porch in a nightgown and takes Woodfin’s face into her hands. She’s read about his nephew in the newspaper and offers her condolences.

We settle in as the sun sets over kudzu-covered hills to listen to Antonio, the daughter of an Italian immigrant, tell us stories. She and her husband ran a grocery store in the Titusville neighborhood, where everyone was allowed to shop on credit. The store, she says, was burned by the KKK in the same string of attacks as the 16th Street Baptist Church in 1963. “I see a lot of our customers from back then, and honey, they see me and we hug and kiss.”

On the way back to campaign headquarters, Woodfin tells me it’s people like Rose Antonio who keep him going. “Her energy? It’s contagious.”

Katherine Webb-Hehn is a Birmingham-based writer. Her work has appeared in The New York Times, The Bitter Southerner, PANK, Arts & Letters,and elsewhere. Currently, she’s the Alabama Political Reporter for Scalawag Magazine. You can follow her on Twitter @KAWebb_