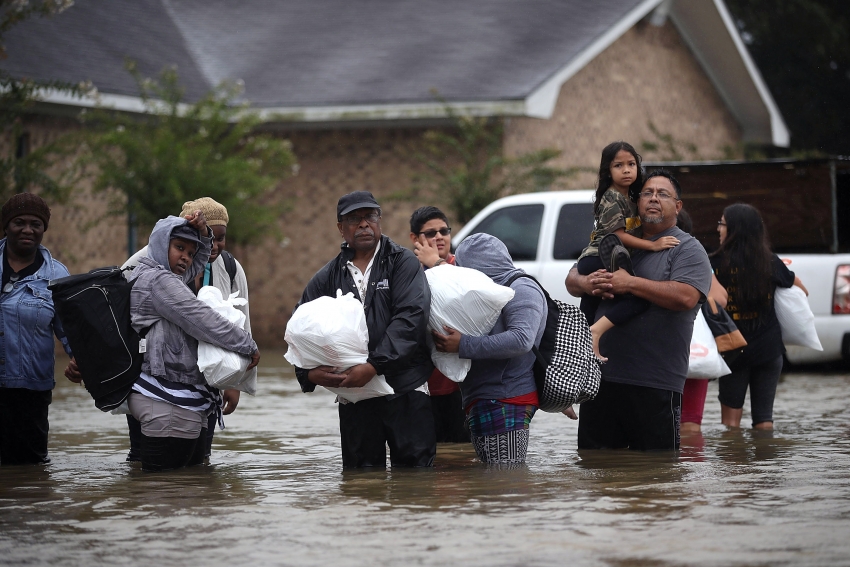 People walk down a flooded street as they evacuate their homes after the area was inundated with flooding from Hurricane Harvey on August 28, 2017 in Houston, Texas. (Photo by Joe Raedle/Getty Images)

Left to Fend for Themselves, These Houston Communities Are Coming to Their Own Rescue

A conversation with Malik Muhammad, a Houston-based organizer with the National Black United Front.

Many Hurricane Katrina victims from New Orleans relocated to Houston and have had to go through this all over again. They are seeing almost the exact same response.

As Hurricane Harvey breaks the U.S. record for rainfall in a single tropical storm, reports are emerging that heavy flooding is debilitating hospitals, shuttering schools, deluging nursing homes and leaving tens of thousands in the Houston area in need of emergency shelter. Amid the devastation, which has killed at least 13 people, the U.S. Border Patrol continues to operate checkpoints—escalating the climate of fear for undocumented residents.

Witnesses on the ground report that poor communities and communities of color are being largely left to fend for themselves. “People are having to step in and provide support for families and friends when the Red Cross isn’t able to do that,” Dee, a Houston-based organizer with the environmental justice group Texas Environmental Justice Advocacy Services, told In These Times. “We have front-line community members who are impacted themselves trying to help and save other community members.” (The Red Cross did not immediately respond to a request for comment.)

Like the floundering aid response, the severe storm itself is the product of social failure. It is well-established that, as human-made climate change sets new records in temperature, droughts are becoming more severe and storms becoming more frequent and extreme. Meanwhile, the corporations driving global warming are compounding the disaster: ExxonMobil admitted on Tuesday that the tropical storm damaged two of its refineries, releasing dangerous pollutants into nearby areas.

Malik Muhammad, is the national vice chair of organizing and training for the National Black United Front (NBUF), which he describes as “an organization of African descendants that is pro-black and dedicated to empowering, protecting and advocating on behalf of black people in America.” Malik is based in Houston’s Third Ward and involved in NBUF’s Houston chapter. I spoke to Malik, right before he was setting out on an aid and rescue mission, about the conditions that paved the way for the current crisis and the heroic efforts of ordinary people who have been largely abandoned by society and the state.

Sarah Lazare: What do you want our readers to know about what’s happening on the ground right now in Houston?

Malik Muhammad: First of all, there is a long history of neglect as it relates to city officials preparing for this flood and the storms we get on a regular basis in Houston.

We are also seeing gentrification, and many condo developers are not putting retention ponds in place as they should, so that the water will be able to drain back naturally to its proper place. You have communities that historically didn’t flood, but now water is going to those areas.

The mayors of Houston have, in large part, neglected the people of Houston and the city of Houston by not allocating money to fix the drainage issues in the city.

Sarah: As the disaster unfolds, is aid being evenly distributed?

Malik: You’re seeing some of these larger aid agencies, like the Red Cross, going out into the more affluent communities and leaving a lot of the more impoverished communities without resources.

We have military helicopters flying around, and there is a large police presence. As far as ICE intimidating people, a lot of the people who are affected by SB4 [a new rule outlawing sanctuary cities, yet to go into effect] are definitely afraid to call for help, due to the political climate we are in right now.

There isn’t as much assistance as people would like there to be. In my neighborhood, the Third Ward, I haven’t seen people in boats. In the more affluent communities, that’s where the resources are going. That’s where all the personnel are going. In our communities, people are left to fend for themselves. They are coming together.

We have flooding right next to one of our bayous in the Third Ward. Water is going through the bayou into the neighborhood and streets. People are stuck in their homes. It’s up to neighbors to reach out and help one another. We at NBUF are headed over there right now.

Sarah: What’s it like to provide direct aid? Can you describe the scene?

Malik: On the very first day of the hurricane, I was driving around my community. We couldn’t get out of our neighborhood. We were able to help several people, including homeless people. This was two days ago.

People were stranded, searching for high ground, walking through water, in their homes with ceilings collapsed. Elderly people were panicked and afraid and looking for some kind of assistance. There were children out here who have lost everything, as well as adults, looking to start their lives over. Many Hurricane Katrina victims from New Orleans relocated to Houston and have had to go through this all over again. They are seeing almost the exact same response.

We have a large SUV and a boat with trailer attached. We’ve been going out to rescue people yesterday, the day before, and now today.

Sarah: What resources are in place?

Malik: We have the Third Ward Multi-Service Center that we are referring people to in our neighborhood. The George R. Brown Convention Center is over-crowded. I hear people can’t locate their loved ones and it is causing panic. Many facilities have not been opened by the city. The city could have done a better job of opening facilities for people who lost everything. We have an astrodome, a soccer stadium, churches—they should be opened up.

Volunteers in the Third Ward are the ones getting people to the Multi-Service Center. I was there yesterday, and it is very wet. People are in need of shoes and clothes. They had wet feet and wet clothes. People looked pretty down-and-out. They’ve lost so much, and they’re afraid. It’s pretty depressing. There are about 100 people at the Third Ward shelter.

Sarah: For people who live far away and want to take concrete steps in solidarity, what is your recommendation?

Malik: My recommendation is that you find a credible organization where any money you send will be received and used well. We don’t advocate the Red Cross or Salvation Army, due to the fact that they have a track record of money not reaching the people who need it the most.

We have a long track record of being in our community and addressing issues that affect our people. We don’t need to go out into the community and build relations—we already have those relationships. We believe in being self-sufficient in our communities as a people. We need to provide for ourselves. In this day and time, if someone is under the illusion that the government is going to come in and save us and allocate resources to us, they are 100 percent delusional. This government has a long track record of not coming to our communities and not doing for us what they do for others. Allocating resources to our own people from our own people—that’s what we’re promoting.

Everyone is working together in our community to make sure everyone is safe. People are checking on their elders, neighbor to neighbor, making sure everything is okay. I see neighbors outside removing debris, going grocery shopping for people who don’t have automobiles. I see children being babysat, people opening their homes, allowing people to seek refuge. The storm is bringing our community a lot closer. We want to make sure everyone is okay and that we come out healthy.