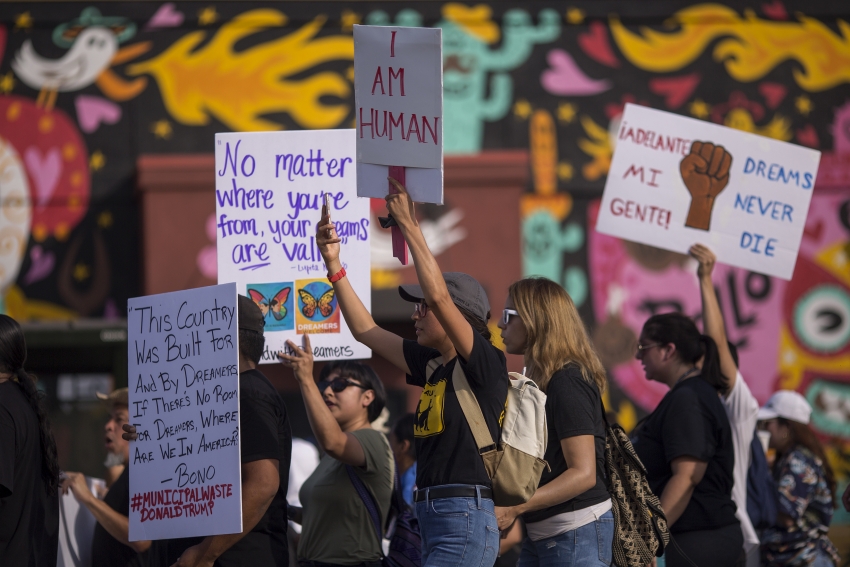 Thousands of immigrants and supporters join the Defend DACA March to oppose the President Trump order to end DACA on September 10, 2017 in Los Angeles, California. (Photo by David McNew/Getty Images)

It’s time for the anti-capitalist Left to bring the fight to the electoral arena.

The consolidation of a grassroots-based, independent political formation that can fight both inside and outside of the electoral arena and the Democratic Party is crucial for translating a victory over Trumpism into momentum for radical change.

A longer version of this article appeared on Organizing Upgrade.

The white-supremacist violence In Charlottesville—and Donald Trump's embrace of the “very fine people” who marched and murdered under Confederate and Nazi banners—did more than sharpen the intense polarization already underlying U.S. politics.

It spotlighted the dangerous role white nationalism plays in galvanizing Trump's racially anxious white social base, while energizing the anti-racist and democratic-minded forces that have the potential to overcome it.

Realizing that potential is going to require the resistance—especially its radical wing—to up our game. This escalation must be anchored in five key points:

1. The over-arching priority of the current period is to break the power of Trump, and the white nationalist bloc, that together drive the Right's anti-democratic and anti-working-class agenda.

2. Direct action and street protest make up indispensable components of the resistance. At least one show of force on the scale of the Women's March would be a reminder that the popular majority will not leave it to intra-elite maneuvers to determine Trump's fate. Energy from mass action needs to be carried into the 2018 and 2020 elections, which provide the only avenues to remove the white-nationalist Right from power.

3. To bring together sufficient social forces to defeat Trump and the GOP, and strengthen progressive initiatives if and when Trump is ousted, the Left needs to engage the fight within the Democratic Party over message, candidates and allocation of resources. There is a parallel here with the 2016 campaign. Almost all sectors of the Left grew as that election polarized the country. But the ones that grew the most—Democratic Socialists of America and Labor for Bernie—were those that plunged into Sanders' campaign, not those who criticized it for being insufficiently radical or dismissed it because it fought on the terrain of the Democratic Party.

4. The struggle for a working-class program of economic, racial, gender and environmental justice—and peace—will be conducted beyond the next few election cycles. We should have confidence that the kind of program advocated by Bernie Sanders or Rev. William Barber can, at some point, gain majority support and shape the national agenda. But we also need to strategize based on hard-headed realism about how far we have to go to address the fragmentation of the progressive movement and the relatively marginalized anti-capitalist Left.

5. The issues front-and-center in Charlottesville—and underscored by Trump's ending DACA—are race, racism and the integral role people of color have always played in the very heart of the U.S. working class. Because of the character of the Trump regime, and the weaknesses in race-class analysis and practice in the resistance, these factors stand out as determinants of whether or not the resistance continues to mature.

In shorthand: The Left must interact with the post-Charlottesville upsurge by pursuing a strategy that is anti-Right, anti-racist, gender-inclusive, grounded in the interests of the working class and oriented toward working inside and outside of the Democratic Party.

The resistance has come a long way

The resistance has come a long way since Trump's gloating inauguration. Trump's insistence that “both sides” were to blame in Charlottesville alienated major sections of the political class. With corporate leaders fleeing his show-piece councils, the top military brass issuing statements contradicting his views, and open feuding with congressional leaders of his own party, Trump's governing coalition is significantly narrower than it was in January. His popular approval rating is at a record low of 38 percent.

Still, that 38 percent constitutes a big majority of Republicans. So GOP electeds defy Trump at the peril of a primary challenge. Their calculations are changing daily, but GOP members of Congress still see alignment with Trump as necessary to implement their shared agenda of crushing the labor movement, rolling back the rights of women and LGBTQ people, stonewalling action against climate change and transferring even more wealth into the pockets of the already rich.

Our side is the majority, and we also have the moral high ground. But these are not enough. This fight will be decided by power. The Right will not be divided and forced into retreat until the open advocates of white supremacy, Islamophobia, anti-Semitism and unrestrained patriarchy are demoralized by being out-numbered 100 to one every time they show their faces. And it will take the energy in the streets translating into an anti-GOP, anti-Trump tsunami in the voting booths to break their grip on power.

U.S.-style racism came into being in the midst of struggles over land, property, power, and political rights in the 17th century. Slavery, along with the genocide of Native Americans, is accurately termed the country's “original sin.”

Among the manifestations of this deeply rooted racism is a recurring pattern. In response to movements that advance the interests of people of color, especially African Americans, there is a fierce backlash—even as these movements expand democracy for all people. That backlash involves building a cross-class, white united front which advances the economic program of the most reactionary wing of the ruling class. The backlash enlists all who can be mobilized to defend white power and privilege, and it is aided by the passive allegiance of others who believe that they can advance their own narrow interests by connecting with this bloc.

This pattern began with Nixon's “Southern Strategy.” It took a leap forward with Reagan's election and the entrenchment of the “neo-liberal model” of privatization, de-regulation, pro-1-percent tax “reform” and a withering offensive against unions.

In the wake of the 2008 financial crisis and recession, we saw a sharp rise in economic inequality and anxiety, demographic changes and the election of first Black president. The backlash bloc experienced an unprecedented twist: Leadership was ripped from the GOP establishment. It was seized by a demagogue who rode birtherism, anti-immigrant hysteria and blatant Islamophobia to the White House.

Trump and his core supporters—forces bent on 'racial and imperial revenge'—now sat in the driver's seat. The rest of the GOP fell in line, with minor exceptions. Conservative intellectual Avik Roy explained why: “We've had this view that the voters were with us on conservatism—philosophical, economic conservatism. In reality, the gravitational center of the Republic Party is white nationalism.”

The Right's goal is to establish a racialized, authoritarian state. Given the unpopularity of their economic agenda, and demographic changes not working in their favor, the Right sees that kind of state as needed to implement their full program of fossil fuel-driven capitalism and permanent global hegemony. This is not classical fascism: It more closely resembles the United States during the height of Jim Crow, or Israel today, than the bourgeois democracy that has defined the United States since legalized discrimination was abolished in the 1960s.

The U.S. majority is against this shift, and the country has become polarized along a Trump vs. anti-Trump axis. The road to maximizing chances of defeating Trump and growing the anti-capitalist Left in the process is for the Left to bring ourselves and our politics to the battle as it is actually unfolding.

The Left can play a crucial role in keeping a stress on mass action by getting people out in the streets, onto the picket lines and into town halls. We can fight for the organizations that mobilize people to develop and maintain a democratic, participatory character and do all we can to sustain and deepen political discussion alongside mobilization and protest.

Regarding the electoral arena, Trump and the GOP attained power by winning elections. It is hardly surprising, then, that most people opposed to Trump, knowing they constitute a majority, have concluded that the key task is beat Trump and the GOP at the ballot box. This has led to a surge of energy in the direction of what is now the only practical alternative, the Democratic Party ballot line.

All the energy moving “from protest to politics” is a good thing. But given that it is flowing onto Democratic Party terrain, there are many challenges. The trick is to engage the Democratic Party in a way that maximizes chances of an anti-Trump victory while building progressive clout, consolidating independent vehicles for long-term struggle and expanding the ranks of the anti-capitalist Left.

The lessons drawn from 2016 are a good starting point. Democratic candidates need a message beyond, “We aren't Trump.” A program of economic, racial, gender and environmental justice and peace has to permeate through Democratic campaigns at all levels. Only such a message can inspire the mass Democratic constituencies, those who stayed home in 2016 or voted third party, as well as Trump voters who now realize that the president is a con man.

The Left also must keep reminding ourselves and others not to underestimate the Trump regime or the stakes in the 2018 and 2020 balloting. If the GOP isn't soundly defeated, everyone in the GOP (and too many Democrats) will conclude that appeals to racism are political winners and will act accordingly. Conversely, a crushing victory over the GOP will divide and demoralize the enemy camp and give the forces who spearheaded that victory tremendous momentum.

We also bear the responsibility of being an anchor force regarding the ways race and class are interlinked. Only a multi-racial, class-conscious force of millions has any chance of winning lasting victories over the world's most powerful, racist ruling class. Throughout U.S. history, the Achilles heel of efforts to construct that force has been the susceptibility of its white component to view the non-white sector as something other than class brothers and sisters.

The consolidation of a grassroots-based, independent political formation that can fight both inside and outside of the electoral arena and the Democratic Party is crucial for translating a victory over Trumpism into momentum for radical change. The building blocks of such a form have become visible. The task is to further increase the budding political alignment between such groups as Our Revolution, Labor for Our Revolution, MoveOn, Color of Change, the Working Families Party, the various national and state-based community organizing formations, 350.org, Planned Parenthood and many others.

We need strategic patience, as well as a sense of urgency. Building a base in the multi-racial working class, reviving the labor movement and constructing a unified, independent organizational vehicle cannot be accomplished in one election cycle. These tasks will unfold unevenly—developing state by state and locality by locality, as well as nationally.

But these tasks will be orders of magnitude harder, if not impossible, if we have to attempt them for seven more years with the GOP holding power.

Max Elbaum has been active in peace, anti-racist and radical movements since the 1960s. Most recently, he was part of a team that prepared a three-part 2016 Election Curriculum, "The U.S. Electoral System and Progressive Electoral Strategy," and a follow-up Post-Election Discussion Guide "Changed Terrain Demands a New Orientation."