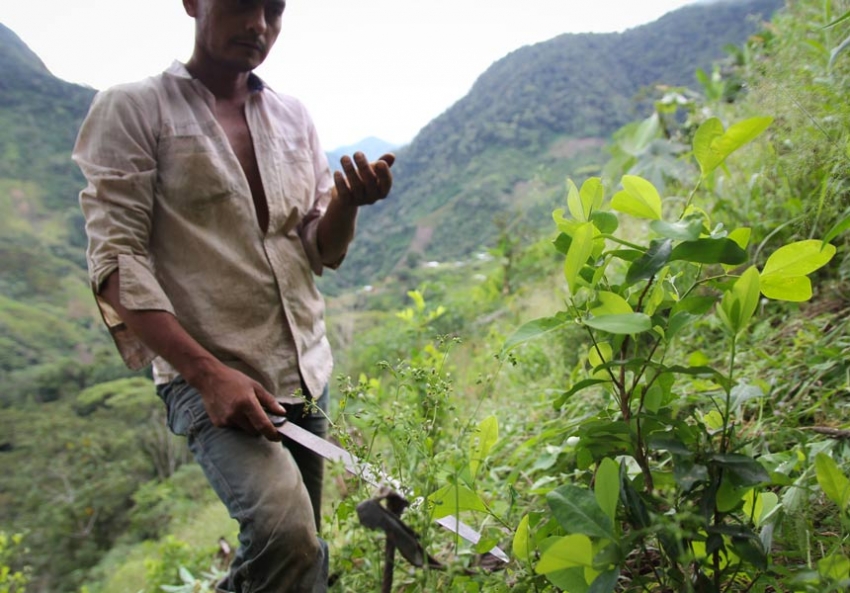 Jorge Moreno (who prefers to have his face partly obscured) cultivates his small coca field on a mountainside in the state of Nariño, Colombia. (Kimberley Brown)

When the Government Orders You to Burn Your Crops

Colombian farmers are a casualty of the war on coca.

As politicians debate the best way to tackle the global war on drugs, Colombian farmers remain a convenient scapegoat.

MADRIGAL, COLOMBIA—Each day at 6 a.m., Jorge Moreno walks to his coca field to harvest leaves that will eventually be made into cocaine. He inspects the leaves by hand and cuts them with a machete—his only tool—while swatting away mosquitoes.

He started recently, because there were few other options. The only thing he was ever taught to do was use a machete, he says, and at least coca farming allows him to make a bit of money to provide for his five children.

“The government thinks we coca farmers are narcotraffickers, that we’re rolling in money, but no, it’s not like that,” Moreno tells In These Times. “We cultivate coca because it’s the only way to survive.”

Moreno is one of hundreds of coca farmers in Colombia’s southwestern state of Nariño, among the poorest in the country. Rural areas of Nariño lack everything from proper roads and basic public services to, of course, jobs. It’s also the state with the most acres of coca. Almost everyone in Madrigal, Moreno’s village, depends on it for their livelihood, since coca money drives the local economy.

During Colombia’s 52-year civil war, Madrigal was repeatedly surrounded by armed groups fighting over control of the illicit crop. The government and guerilla groups finally reached a peace agreement in 2016, part of which includes a government clampdown on coca fields.

Earlier this year, authorities announced a plan to eradicate about 400 square miles of coca across the country. The first half would go through crop substitution programs promised in the peace accords, to replace coca with alternative crops such as corn, yucca or cacao. The rest is to be wiped out through forced eradication, with the Colombian army and antinarcotics troops manually ripping out or spraying crops, though the land will remain in farmers’ hands. Farmers who do not volunteer for the substitution programs risk arrest.

Since these initiatives have begun, farmers have come out in large numbers to defend their crops through blockades and protests, clashing with antinarcotics forces head on. These special forces haven’t been through Madrigal yet, but Moreno says he would fight them off if they were to come.

Tensions reached a peak in September, when special forces reportedly used bombs armed with staples against protesters in the northern state of Catatumbo. In the coastal state of Cauca, more than 300 farmers, armed with machetes, wooden pallets and rocks, approached an army brigade manually tearing out their coca crops; one protester was killed and four more wounded.

According to Alejandra Torres, the Nariño coordinator for COCCAM, a national body that represents coca, poppy and marijuana farmers, most farmers want to get out of the coca industry because of the security risks involved. Moreno says he would gladly stop cultivating coca, but lacks the start-up capital to change crops and worries the government will back out on its promises.

In theory, after signing up for the substitution program, farmers will have 60 days to destroy their harvest, then receive funding for a new crop. Government officials insist they are committed to the program, but “the government has made numerous deals with communities and not followed through,” Torres says. “So it’s a risk to make a deal with them.”

This is not the first time that coca farmers have faced harsh eradication policies. Many remember when the government carried out mass aerial spraying in 2003, as part of the U.S.-funded Plan Colombia, which involved spraying the herbicide glyphosate over rural areas where coca was grown. The spray killed other crops, trees and ecosystems, contaminated rivers, and landed on people, burning their skin. The Colombian government banned the practice in 2015.

According to the Washington Office on Latin America, aerial spraying in Colombia—which occurred from 1994 to 2015 with varying intensity—had no effect on overall production of coca cultivation, despite the U.S. government insisting otherwise. Coca farmers in Madrigal tell In These Times they simply moved farther into the mountains.

In June, U.S. Secretary of State Rex Tillerson suggested starting mass aerial fumigations again, but so far the Colombian government says it will stick to the peace accords, which allow spraying only as a last resort. President Donald Trump has also threatened to suspend the $450 million in U.S. aid to Colombia if it doesn’t do more to tackle the drug problem, which he says has led to an increase in U.S. consumption.

The U.S. has long been the world’s top cocaine consumer, with Europe not far behind. But as politicians debate the best way to tackle the global war on drugs, Colombian farmers remain a convenient scapegoat.

“We are apparently the source of the drug problem,” says Moreno, walking home after a day in the field. “But we get the least.”