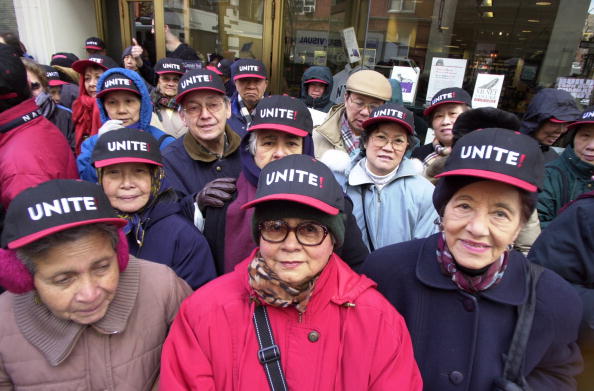 Members of Local 23-25 UNITE, the Union of Needletrades, Industrial and Textile Employees, attend a memorial ceremony at the site of the Triangle Shirtwaist Factory fire that killed 146 garment workers, mostly women and young girls, in lower Manhattan in 1911. (Photo by Budd Williams/NY Daily News Archive via Getty Images)

Sexual Violence Is a Workplace Crisis. The Solution Is Organizing.

Keeping these stories to a whisper reinforces a climate of shame and fear, and puts the onus on the worker to avoid harassers.

The lessons of the Weinstein affair are both tragically obvious and disturbingly revealing. What had been swept under the red carpet for decades—not just Weinstein’s toxic behavior, but a culture of normalization—is now out in the spotlight. Hollywood punishes demands for accountability but rewards conformity with raises, access to power, maybe even an Oscar.

Weinstein’s abuses may seem larger than life, but sexual violence haunts the shop floor and the cubicle as well as the silver screen. Accurate statistics are hard to come by, because people tend not to file formal claims and sometimes don’t recognize their experiences as “sexual harassment.” But the Equal Employment Opportunity Commission estimates that “anywhere from 25 percent to 85 percent of women report having experienced sexual harassment in the workplace.” In the restaurant industry, some two-thirds of women and a majority of men reported facing sexual harassment by managers, according to a 2014 Restaurant Opportunities Center United survey. In a 2016 union-led survey of Chicago hospitality employees, nearly 60 percent of hotel workers and 80 percent of casino workers reported sexual harassment, primarily by male guests, including getting flashed and unwanted sexual advances.

Much has been said about the power of a “whisper network” to warn women of predators. The grapevine among co-workers can indeed provide a safe space to disclose the unspeakable. But while whispering about the bad co-worker or manager can be temporarily empowering, it doesn’t solve the underlying problem: the overarching fear that blocks women from asserting their rights at work. You can’t confidently lean in to negotiate a raise when the boss who gropes you is evaluating your portfolio. Keeping these stories to a whisper reinforces a climate of shame and fear, and puts the onus on the worker to avoid harassers.

Fortunately, there’s a way to counter silence through a more equitable social contract: It’s called a labor agreement, and it’s negotiated not in the hush-hush of an HR cubicle, but through collective bargaining. Union agreements protect equality at work, provide everyday organizational support for workers, and promote public accountability by establishing legally binding conditions of employment. This can be a counterweight to privately negotiated forced arbitration proceedings or “nondisclosure agreements” that drive individual workers to waive their rights to sue or publicize violations, effectively shielding bosses from liability. Contracts can and should contain strong protections for employees against retaliation for reporting abuse, and legal avenues for seeking damages, through a formal adjudication process whenever possible.

Union shop stewards also play an important role as independent advocates. They can establish rules on workplace conduct, provide training resources and ensure meaningful enforcement of regulations and labor standards. By codifying the employer’s responsibility to ensure a fair, safe workplace for all, unions can amplify a lone whisper of grievance.

But because less than 7 percent of private-sector workers are union members, contracts alone won’t solve the problem anytime soon. Beyond negotiating terms of accountability for an individual workplace, unions can advocate for measures like citywide ordinances protecting workers from sexual harassment. In Chicago, the hotel workers union UNITE HERE pushed through landmark legislation to give legally enforceable protections against sexual harassment on the job, mandating that all workers be equipped with a “panic button” so housekeepers can immediately report a predator in the hallway. Beyond the whispered warning, the button establishes real-time accountability for assaults, even when they happen in the hushed corridors of an executive suite or behind the kitchen door. And on a cultural level, the law helps create a social consensus that sexual violence of any sort is a crime, that women workers are entitled to respect on the job, and that the burden of constant fear of assault in the workplace is an issue of gendered economic injustice.

Anonymity can help break the silence, but ultimately, women can’t challenge oppression by being forced to act as our own collective shock absorbers. There’s a reason why you have to work to keep your voice down; whispering does the work of breeding collective shame.

Feminism should not work in the quiet service of capitalism. It must be the rabble that breaks the deafening silence. The #MeToo outpouring bridges the gap between such “safe” underground affirmation and the force of collective protest. And only through strength in numbers can a whisper accumulate into the loudest voice of all.