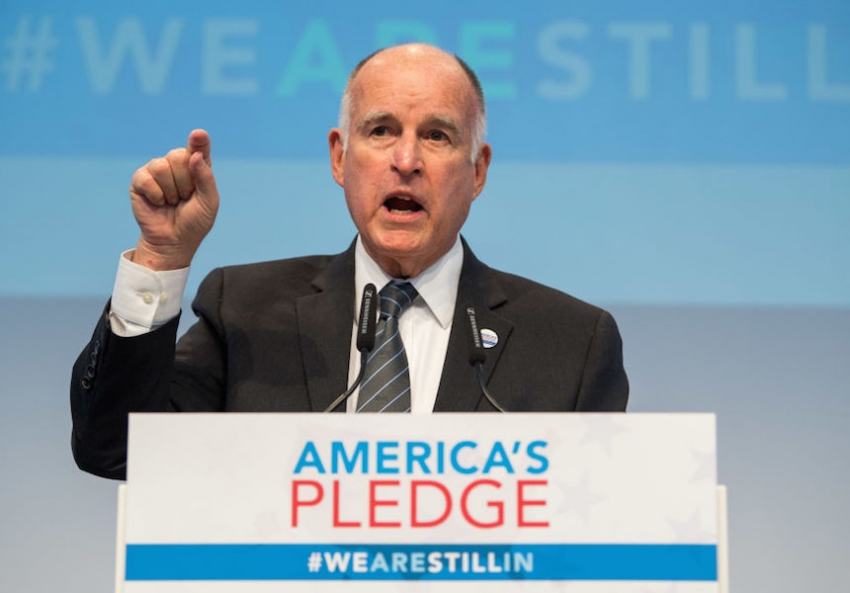 Jerry Brown Lashes Out at COP23 Climate Protesters: “Let’s Put You in the Ground”

"Some minds are not subtle enough to appreciate the paradox, the dialectic of carbon and non-carbon,” Gov. Jerry Brown said.

BONN, GERMANY—California Gov. Jerry Brown (D) is set to have a big week here in Bonn at the UN Framework Convention on Climate Change’s 23rd Conference of the Parties (COP23). He and former New York Mayor Michael Bloomberg are key figures in the U.S. Climate Action Center (USCAC), an unofficial voice for the United States at the climate summit (the official U.S. delegation is keeping a low profile). With the Trump administration intending to withdraw from the Paris Agreement, the USCAC’s rallying cry is fairly clear: We Are Still In.

A few minutes into a Saturday USCAC event featuring Wal-Mart’s Senior Vice President of Sustainability, Brown was interrupted by protestors asking, “Still In For Want?”

A group of Californians and other delegates to COP23 from the United States—many involved in climate justice organizations—stood up as Brown started speaking, giving short testimonies about Brown’s close relationship to the fossil fuel industry, a major force in California’s economy. After protesters chanted “Keep It In The Ground,” in opposition to fossil fuel extraction, Brown replied, “Let’s put you in the ground so we can get on with the show here.” Clumps of interrupters continued to pop up and be escorted out through the rest of the presentation, prompting responses from Brown. “Unfortunately, in politics,” he said, “we don’t have a magic wand. … I can’t say ‘Stop, there’s no more coal, no more oil.’ ”

It’s not the first time Brown has had tense interactions with climate organizers. While Brown has touted the success of California’s cap and trade program at COP23, the measure that passed this summer extending the program was opposed by a large portion of the state’s climate and environmental justice organizations. As In These Times reported this summer in the lead-up to the cap and trade program’s extension, the latest bill was drafted with heavy input from oil and gas interests and comparatively less from communities dealing first-hand with the impact of the state’s extractive industry. The final legislation included several provisions taken near verbatim from industry lobbying materials.

“I firmly believe we’re not going to see any adequate climate action unless we cut the fossil fuel industry entirely out of the negotiating room,” Dallas Goldtooth, an organizer with the Indigenous Environmental Network who participated in Saturday’s action, tells In These Times. “They are the ones that cause the problems, so why are we letting them at the table to develop so-called solutions?” Goldtooth is also in Bonn as part of the It Takes Roots delegation, which orchestrated the disruption. The delegation is comprised of black and brown organizers from around the United States, many of them from communities dealing with fossil fuel extraction in their own backyards.

Another participant, Eva Malis, 22, (who is not with the It Takes Roots delegation) has been involved in the more than a decade-long push to ban fracking in California. “We’re here as Californians but this doesn’t only matter to California,” she says. “If we’re defining fracking as climate leadership we need to do better, and the whole world needs us to do better.

“Being here as a Californian and seeing Jerry Brown elevated and honored as a climate hero is really frustrating, because the voices of the thousands of Californians who have been begging Jerry Brown to be a real climate leader are going unheard in this space,” says Malis, who grew up in Valencia, Calif., not far from the site of the massive Aliso Canyon methane leak.

Later, on stage with executives from Pacific Gas & Electric—among the country's largest electric utilities—and healthcare giant Kaiser Permanente, Brown took time out to respond to the earlier interruption: “Most of the critics fly around in airplanes. … If we didn’t have fossil fuels we’d probably be damn cold here. We’re caught up in carbon. Some minds are not subtle enough to appreciate the paradox, the dialectic of carbon and non-carbon.”

For those critics, Brown’s actions speak louder than his words. “Jerry Brown and his administration in California continue to promote fracking in the Central Valley,” says Goldtooth. He’s continuing to [protect] refineries in the Bay Area. The biggest issue is that he’s continuing to promote cap and trade, green capitalism and carbon offsets as a means to solve the world’s problems.”

In a brief post-interruption interview with In These Times, Brown—asked about what role he thought the fossil fuel industry should play in crafting climate policy—said companies should be “using a percentage of their profits” to support climate action. Asked about what the role of fracking should be in California’s energy landscape, Brown said, “We can’t stop 32 million vehicles, can we? You came in a car didn’t you?”

I responded that I had, in fact, come to Germany from New York in a plane, to which he said, “Well that’s the problem. … That’s the problem if we don’t use any oil. We have to get off oil but we’ll do it step by step. Those who say we should do it overnight would put millions of people out of work instantly, and that would create utter horror and economic catastrophe.”

Malis, Goldtooth and others see Brown's approach as part of a larger, worrying trend among some of the most visible faces of the climate fight. “There seems to be a lack of interest to engage with the qualifications of capitalism to fix the problem that capitalism has created,” Goldtooth says of climate change. “What we do here, like this action you just saw, is a means for us to have public engagement on the issue and not accept things as the status quo just because you have a so-called climate hero like Jerry Brown standing up and saying it's good. I believe that any successful movement is a healthy balance of political and policy action and direct action.”

At What Point Does Bloomberg’s Unprecedented Ad Spending Amount to Bribery of the Media?