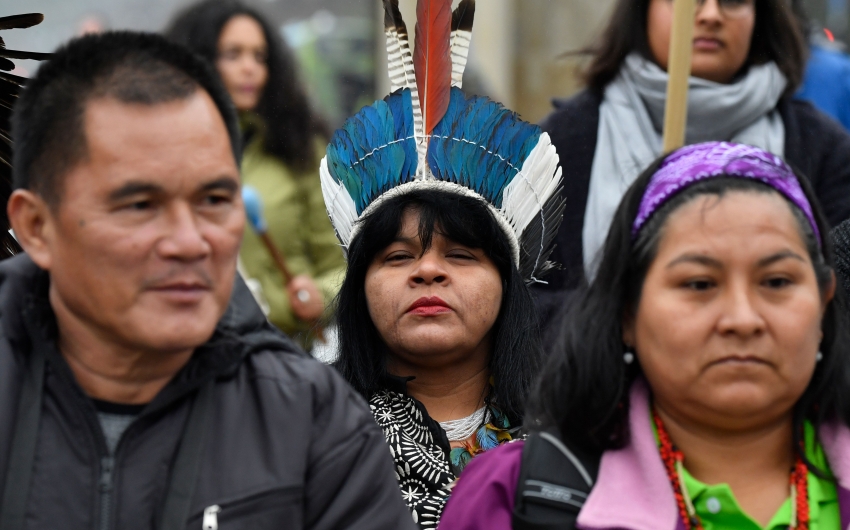 A member of Brazil's amazonian Tuxa tribe took part in a protest with Indigenous leaders from Latin America, Indonesia and Africa, known as 'The Guardians of the Forest', in front of Berlin's Brandenburg Gate on November 1, 2017. The demonstrators were on their way to the COP23 UN Climate Change Conference in Bonn. (JOHN MACDOUGALL/AFP/Getty Images)

While the Indigenous Peoples’ Caucus was given a seat at the climate negotiations table, this role was largely symbolic.

“Overall, there’s a lot of frustration with the Indigenous peoples here about the lack of action and ambition, and feeling that Indigenous peoples are some of the most vulnerable populations out there, from the Arctic to regions where people are experiencing drought conditions."

For the most part, Indigenous rights were not included in the operative text of the Paris climate agreement. Most language about the rights of First Nations peoples were housed in its preamble, and what did make it into the main body of the agreement was an acknowledgement of the importance of Indigenous knowledge. Although exactly what that means—and who will decide what that means—remains to be seen.

“We are not at the table in a manner equal to other nation states,” Tom Goldtooth tells In These Times. He’s executive director of the Indigenous Environmental Network and a veteran of UN climate talks. He was at COP23, which concluded at the end of last week in Bonn, Germany.

“We are still seen as civil society groups, but within the space of the Indigenous Peoples’ Caucus, we do our best to hold those countries that have significant amounts or really any amount of Indigenous people accountable for the impact on Native [people] within their lands,” he says. “What we are fighting for is full and active participation in any negotiation that impacts Indigenous people.”

Tom Goldtooth says there is no real guide on how to do that within the United Nations Framework Conventions on Climate Change (UNFCCC).

This year’s UN climate talks were a mixed bag for Indigenous people from around the world. Having met at least daily through the two-week duration of the talks, the Indigenous Peoples’ Caucus—drawn from seven different regions in every corner of the globe—won a seat at the table in the UNFCCC processes. However, that representative has no decision-making power, not technically representing a party at COP23.

This gave Indigenous negotiators present at COP23 a two-fold task: ensure their right to participate in UNFCCC proceedings and ensure their concerns actually get discussed.

The results were spotty.

The final language that came out of Bonn states that parties to UN climate talks will “consider their respective obligations on the rights of Indigenous peoples and local communities.” This is much weaker language than many had hoped for, and far short of full recognition of Native peoples’ rights in the UNFCCC process.

“This decision only allows us to participate in operationalizing the Indigenous People’s Platform, sometime in the future, at the next UNFCCC COP 24,” said Alberto Saldamando, Indigenous Environmental Network’s legal counsel at COP23 and a tribal and human rights lawyer. “Notwithstanding what has been reported, we are not negotiating or decision making. The platform will only recommend [that].”

Article 7 of the Paris Agreement says that, “Parties acknowledge that adaptation action should follow a country-driven, gender-responsive, participatory and fully transparent approach…” This includes, among other things, “knowledge of Indigenous peoples and local knowledge systems, with a view to integrating adaptation into relevant socioeconomic and environmental policies and actions, where appropriate.”

Dallas Goldtooth, member of the Indigenous Environmental Network and the Indigenous Peoples’ Caucus (and Tom Goldtooth’s son), says the inclusion of this language is opportunity to hold states accountable as they develop their plans to address climate change. However, he also raised concerns about serious barriers to Indigenous nations’ inclusion in the Paris process.

Implementation of the Article 7 text falls officially to the Subsidiary Body for Scientific and Technological Advice, or SBSTA, which convenes both at annual Conference of Party gatherings and at intercessional meetings, which happen between yearly climate talks. Implementing the agreement’s specific language around Indigenous knowledge, though, has effectively been up to the Indigenous Peoples’ Caucus, which meets under the SBSTA umbrella.

Previously, the caucus has only been able to meet unofficially with official parties—like nation-states—to make their voice heard. The inclusion of language around Indigenous knowledge in the Paris agreement opened a window to change that.

And since the agreement’s passage, the caucus has met regularly to discuss what more formal representation on this point might look like. Last week, the caucus passed an incremental milestone in having its participation formally recognized. The caucus also pressed the SBSTA to recommend the Indigenous Peoples’ Platform to the full conference of parties—outlining a number of ways that Indigenous knowledge should be incorporated into deciding the Paris agreement’s implementation.

Navigating the legalese to get this far has been tireless work for members of the Indigenous Peoples’ Caucus. Each day of the talks, they met in the morning in trilingual meetings (English, Spanish and French) that were followed in the afternoon by individual meetings among each of the seven regions represented in the caucus.

Though Indigenous communities at COP are diverse—coming from every corner of the globe and a range of different social and economic contexts—the nature of UN negotiations means that each region must agree to a common, collective platform. The Indigenous Peoples Platform that’s emerged from these meetings is intended to be a blueprint for how to operationalize the consideration of Indigenous knowledge.

“Indigenous people get lumped together as one people or one voice,” says Michael Charles, a delegate with the U.S.-based youth group SustainUS that participated in the Indigenous Peoples’ Caucus. “We all have different culture and practices, so it is different voices.”

Charles says he was also frustrated that all the energy that went into ensuring basic representation meant less time for Indigenous communities at COP23 to push forward policy concerns.

There is also a myriad of internal divisions among Native groups in the United States. None of the representatives from the United States who are part of the Indigenous Peoples’ Caucus are elected tribal leadership. And while some tribal governments have come out strongly against extraction on Native lands, others have close ties to the extractive industry.

“Overall, there’s a lot of frustration with the Indigenous peoples here about the lack of action and ambition, and feeling that Indigenous peoples are some of the most vulnerable populations out there, from the Arctic to regions where people are experiencing drought conditions,” Tom Goldtooth tells In These Times. “If the environment is changing and weather events are coming about that have negative impacts on our habitat, that effects our treaty rights.”

“In consultation with spiritual leaders, we’ve been told of prophecies when trees start dying from the top down and that there would be melting of glaciers and changes in the circle of life,” Tom Goldtooth adds. “That’s coming about now. That’s already here. There’s going to be a time for all people to come together to make a decision about what we’re going to do to save mother earth as we know her. That’s where we're at.”