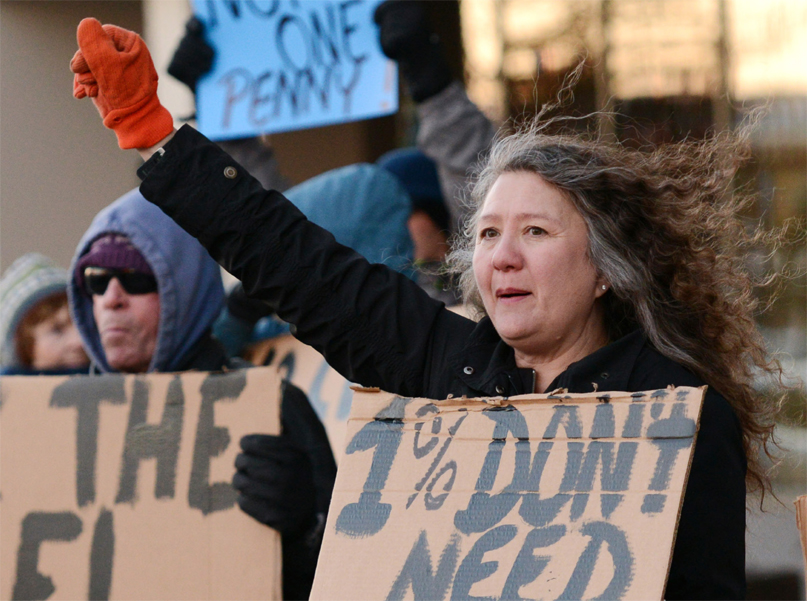 Armed with hot cocoa and a smile, these progressives have spent all year protesting Trump-era policies.

"You can't really afford to be nasty to anybody here because it might be your neighbor. Or you might be related to somebody. We want to get our point across but we think we can do it nicely."

Joni Bruner, an organizer with the Alliance, is wearing a puffy lavender parka and tending to urns of hot chocolate to fortify protesters against the subfreezing temperature and the strong northerly wind. “It’s really cold,” she says.

The Alliance serves as an umbrella for several groups that have held rallies every Tuesday at the Anchorage offices since January 2017 in protest of Trump and congressional policies. The November event, advertised on Facebook as a “Tax Rally & Hot Cocoa,” drew about two dozen people. As passing motorists honk in support, protester George Beck, a retired teacher, explains that he considers the tax bill to be terrible policy.

“I’m certainly against cutting all the services that are going to be cut because of these tax cuts for the wealthy,” he says. He also sees the GOP approach as a reprise of the failed supply-side economic theories of the 1980s. “You were there, right? Trickle down? It didn’t work in the Middle Ages; still doesn’t.”

While the weather may be harsh, the atmosphere of the rally is friendly. Protesters have made a point of avoiding the antagonism that has marked some of the rallies in the lower 48 states, Bruner says. They know the names of most of the senators’ staffers, whether they have pets and what their favorite cupcakes are.

The night of the healthcare debate, Alliance members delivered a cake to Murkowski’s office. And they’ve kept up with one staffer through her pregnancy and the birth of her baby.

“We’ve made pretty good friends with most of them,” Bruner says. “You can’t really afford to be nasty to anybody here because it might be your neighbor. Or you might be related to somebody. We want to get our point across but we think we can do it nicely.”

At one point, a woman comes out of the building and asks the protesters to make space for a heater-repair van. (They do.) The woman turns out to be a nurse with whom Beck had worked at a local elementary school. They greet each other with a quick hug. Beck chides her good-naturedly for dashing out of the building without her coat.

“You’re not dressed for this,” he says.

Previously, some Alliance messages seem to have made headway, even though Alaska’s three-member congressional delegation is all Republican. Most past rallies have focused at least in part on healthcare, Bruner says. Murkowski became nationally famous as one of three GOP senators to block the effort to strike down the Affordable Care Act (ACA). Obamacare is particularly useful to Alaska residents; the state’s small population and geographic isolation make medical costs unsually high and private insurers scarce.

“It feels like Lisa Murkowski listened,” says Lisa Brown, a social services worker who, like others at the rally, was holding a sign reading, “LISA, DO THE RIGHT THING.”

Two days after the Anchorage rally, the tax bill passed the House on a near-party-line vote. No Democrats supported it. Thirteen Republicans broke with their party to oppose it, but Alaska’s sole House member, Don Young, was not among them. The bill then moved to the Senate.

Alliance members weren’t sure if Murkowski would be on their side this time. She had been pushing for Congress to allow oil drilling in the Arctic National Wildlife Refuge (ANWR)—a goal Alaskan politicians have pursued for decades. She has attached ANWR legislation to the same budget process used for the tax bill, which would shield it from filibusters, lowering the threshold for passage from 60 votes to 51.

Still, Brown was optimistic that Murkowski would “do the right thing,” recalling that the GOP’s attempts to get Murkowski to support the ACA repeal were unsuccessful. Beck was less confident.

“I think they finally figured out something that will really get her re-elected, which is what this is about,” he says. It seems he was right.

On Nov. 29, 2017, Murkowski’s office announced she was intending to vote yes. As of press time, the bill had moved into debate, and was expected to go to a vote shortly.

Yereth Rosen is a longtime reporter based in Alaska.