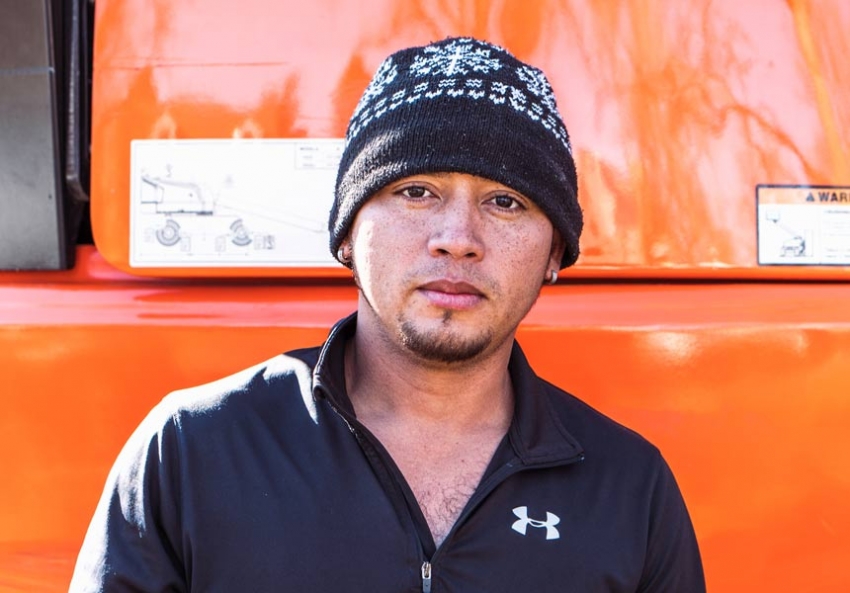 Victor Alfonso Santos, 29, is on the trail of an employer he says owes him $1,080 in unpaid wages. (Brad Golden)

How To Catch a Wage Thief

Day laborers in Denver are tracking down runaway employers.

“In my survey of 411 workers, we found all day laborers to be vulnerable, regardless of immigration status,” says Rebecca Galemba, assistant professor of international studies at the University of Denver. “Employers assume all low-wage immigrants, especially day laborers, lack status and therefore are easy to exploit.”

At 7:15 p.m. Nov. 14, 2017, day laborer Victor Alfonso Santos and organizer Amy Czulada meet near an illuminated, two-story suburban home, just out of sight of the windows. They confer quietly in Spanish, solidifying a game plan. They believe this is the address of Alfonso Santos’ former employer, whom Alfonso Santos says owes him $1,080. To date, the employer has proven elusive, failing to respond to phone calls, text messages and snail mail.

A woman in sweats and ankle socks answers their knock. Czulada defers to Alfonso Santos, who asks calmly for the employer. After making a terse phone call, the woman tells her unwelcome guests that the employer—her father—will return shortly.

When he arrives 45 minutes later, he denies withholding the wages. “I’m one of the ones who follows the rules,” he says.

Czulada is skeptical. “In my experience, the people who start out the conversation by saying, ‘I’m a good person,’ are the ones really fucking people over,” she tells In These Times.

Nearly two years ago, Alfonso Santos took a friend’s advice and moved to Colorado to find work in construction. Alfonso Santos, an asylum seeker from Honduras whose case is still pending, has a work permit. In fall 2017, he was hired to work on several residential plywood and siding projects in Denver, Littleton and Boulder.

That October, a nail gun sent a thick metal nail through his left arm. Requiring a few weeks off to heal, he asked to be paid for prior work: 60 hours over an eight-day period. But Alfonso Santos found that, as for many immigrant workers, securing payment can be thorny.

According to the Colorado Fiscal Institute, about $750 million in wages are stolen in the state each year.

“In my survey of 411 workers, we found all day laborers to be vulnerable, regardless of immigration status,” says Rebecca Galemba, assistant professor of international studies at the University of Denver. “Employers assume all low-wage immigrants, especially day laborers, lack status and therefore are easy to exploit.”

More than 60 percent of respondents to Galemba’s survey experienced wage theft, and only 22 percent of those tried to recover payment. Pursuing a legal claim is not easy. State wage and hour departments are often understaffed, and it can be hard to find attorneys to take such low-dollar cases.

Colorado has relatively robust wage and hour enforcement with 17 inspectors, and a 2014 law required the department to make a determination on claims within 90 days. However, filing a claim requires a work contract or other documentation, which is rare in day labor.

After repeated requests for the $1,080, Alfonso Santos contacted the Centro Humanitario Para Los Trabajadores’ Wage Theft Direct Action Team (DAT). Formed in 2013, DAT consists of volunteers and two part-time staff members. Many volunteers are students from local universities, often members of Democratic Socialists of America and Industrial Workers of the World. The group has helped workers recover more than $40,000 in lost wages.

DAT begins with informal outreach to employers, including phone calls and complaint letters. If employers are unresponsive, it escalates to more public action, such as demonstrations and small claims court.

“Sometimes,” says Czulada, a DAT coordinator, “people come in with nothing and can’t remember the hours they worked or an address. They might not even have a full name of the person they think owes them money.”

But Czulada says Alfonso Santos came with meticulous notes. He said that the employer feigned concern at first, then stopped answering his calls.

Czulada sent a demand letter Nov. 3, 2017, to an address listed for the employer that ultimately led to a storage unit. They found a second address through WhitePages.com, which is where she and Alfonso Santos visited.

As they talked, the employer maintained that another man is actually responsible for the wages in question. DAT will now seek out the homeowner who contracted the job and try to find out who was in charge of payment.

DAT typically has 15 to 20 cases open at any one time, Czulada says. “All these cases are super hard to prove,” she says. But that doesn’t mean they’re unwinnable. “Judges understand this is an informal economy.”

Editor's Note: The print version of this story in the January 2018 issue erroneously stated that the Wage Theft Direct Action Team (DAT) has helped workers recover more than $4,000 in lost wages. The correct amount is actually $40,000. The error has been corrected above.

Gigi Sukin is digital editor at ColoradoBiz magazine and freelances as a food, tech and culture reporter.