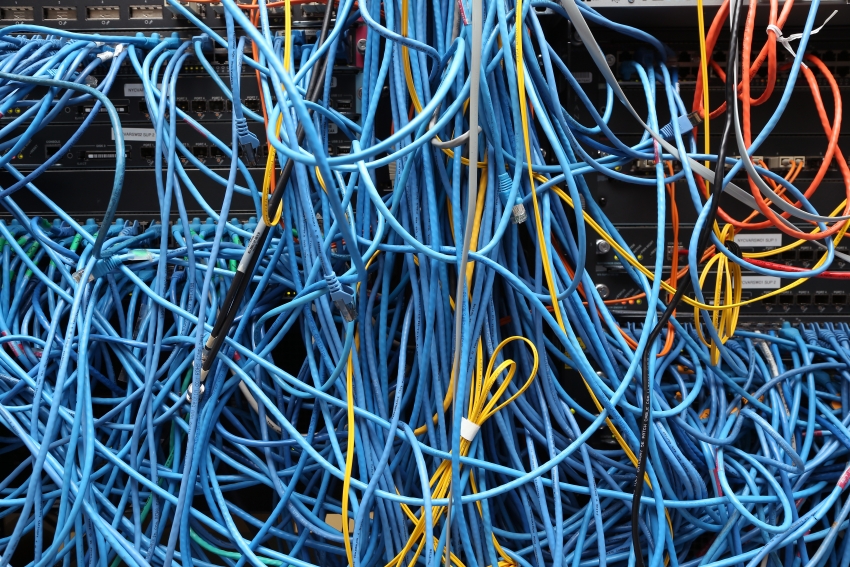 Network cables are plugged in a server room on November 10, 2014 in New York City. U.S. President Barack Obama called on the Federal Communications Commission to implement a strict policy of net neutrality and to oppose content providers in restricting bandwith to customers. (Photo by Michael Bocchieri/Getty Images)

It’s Time to Nationalize the Internet

To counter the FCC’s attack on net neutrality, we need to start treating the Internet like the public good it is.

Private network providers prioritize only those they expect to provide a return on investment, thus excluding poor and sparsely populated areas.

Defying widespread popular objection, on December 14 the Federal Communications Commission (FCC) voted to repeal net neutrality. The principle regulates broadband as a utility, thus forbidding cable companies and Internet service providers (ISPs) from throttling, blocking or otherwise discriminating against online traffic. While net neutrality was only enacted in early 2015, it swiftly proved a key component of an open Internet.

While the assault on net neutrality is formidable, it’s not without formal opposition. The Republican-helmed FCC’s two Democrat Commissioners, Mignon Clyburn and Jessica Rosenworcel, have censured the decision and urged dissent. A number of state attorneys general—including those in New York, California, and Illinois—have vowed to sue the FCC over the ruling. Congressional Democrats, shepherded by Mass. Sen. Ed Markey, plan to file legislation to reverse the repeal.

Relying on such reactive regulatory appeals to herald the fight for a fair Internet, however, won’t guarantee one. The FCC’s revocation of net neutrality isn’t a call to merely restore the technocratic 2015 rules, but to reclaim the Internet as a public good to which all have the right to access.

The Internet was initially a product of public spending. The U.S. Defense Department first conceived it in the 1960s, following a period of feverish technological competition with the Soviet Union. By the early 1990s, the government ceded control of the Internet to the private sector, which had the putative capacity to host its rapid growth. Since then, the transition to corporate stewardship has stratified the digital landscape and isolated disenfranchised populations.

Consider the monopolization of ISPs. Because different network providers, such as AT&T and Comcast, sell broadband to discrete geographic regions with little overlap, they have immense power to manipulate speeds and charge prohibitively expensive rates. Comcast, the nation’s largest private broadband provider, is notorious for overcharging its users and stifling speeds. Users and politicians alike echo these concerns for other ISPs on a seemingly regular basis, rendering the telecom industry one of the country’s most reviled.

Such profiteering tactics have disproportionately affected low-income and rural communities. ISPs have long redlined these demographic groups, creating what’s commonly known as the “digital divide.” Thirty-nine percent of Americans lack access to service fast enough to meet the federal definition of broadband. More than 50 percent of adults with household incomes below $30,000 have home broadband—a problem plaguing users of color most acutely. In contrast, internet access is near-universal for households with an annual income of $100,000 or more.

The reason for such chasms is simple: Private network providers prioritize only those they expect to provide a return on investment, thus excluding poor and sparsely populated areas.

Previously, the government has intervened, requiring telecoms to proffer discounted service to low-income areas. These initiatives, however, have fallen short. In 2016, AT&T introduced low-cost regional broadband for Federal Supplemental Nutrition Assistance Program (SNAP) users, an FCC-mandated condition of its merger with DirecTV. To receive the service, users had to live in neighborhoods that could accommodate a minimum speed of three megabits per second (Mbps). The significant number of people whose addresses didn’t meet that criteria, meanwhile, were forced to either pay full price or forego access. (The National Digital Inclusion Alliance detailed the company’s egregious redlining of impoverished communities in Cleveland.)

Chattanooga, Tenn. has seen more success in addressing redlining. Since 2010, the city has offered public broadband via its municipal power organization, Electric Power Board (EPB). The project has become a rousing success: At half the price, its service is approximately 85 percent faster than that of Comcast, the region’s primary ISP prior to EPB’s inception. Coupled with a discounted program for low-income residents, Chattanooga’s publicly run broadband reaches about 82,000 residents—more than half of the area’s Internet users—and is only expected to grow.

Chattanooga’s achievements have radiated to other locales. More than 450 communities have introduced publicly-owned broadband. And more than 110 communities in 24 states have access to publicly owned networks with one gigabit-per-second (Gbps) service. (AT&T, for example, has yet to introduce speeds this high.) Seattle City Councilmember Kshama Sawant proposed a pilot project in 2015 and has recently urged her city to invest in municipal broadband. Hawaii congressperson Kaniela Ing is drafting a bill for publicly-owned Internet for the state legislature to consider next year. In November, residents of Fort Collins, Colo. voted to authorize the city to build municipal broadband infrastructure.

The Fort Collins vote reveals a widening aperture between public needs and corporate ISPs’ interests. The state of Colorado—among others—prohibits cities from building municipal broadband infrastructure. In many cases, such prohibitions can be traced to telecom-sponsored legislators. Yet in Colorado, 31 counties have protested the strictures such lobbying has produced, and it’s likely that other state residents, if given the opportunity to weigh in, won’t be far behind.

City-operated networks have the power to increase speeds, decrease costs and broaden availability. Yet restoring public broadband ownership can’t be a piecemeal municipal effort, as hordes of communities will continue to be neglected. Rather, public ownership must be won on a national level to eradicate ISP lobbying and monopolies, and corporate ISPs themselves, thus guaranteeing universal access.

The potential absence of net neutrality is simply a symptom of an unfettered free market—the corollary to decades of privatized network providers’ free rein to overcharge and underserve. Advocating for the preservation of net neutrality is necessary, but it won’t suffice if equitable internet access is to be achieved. Under such high stakes, it’s time to regain the digital infrastructure that could have—and always should have—been ours.