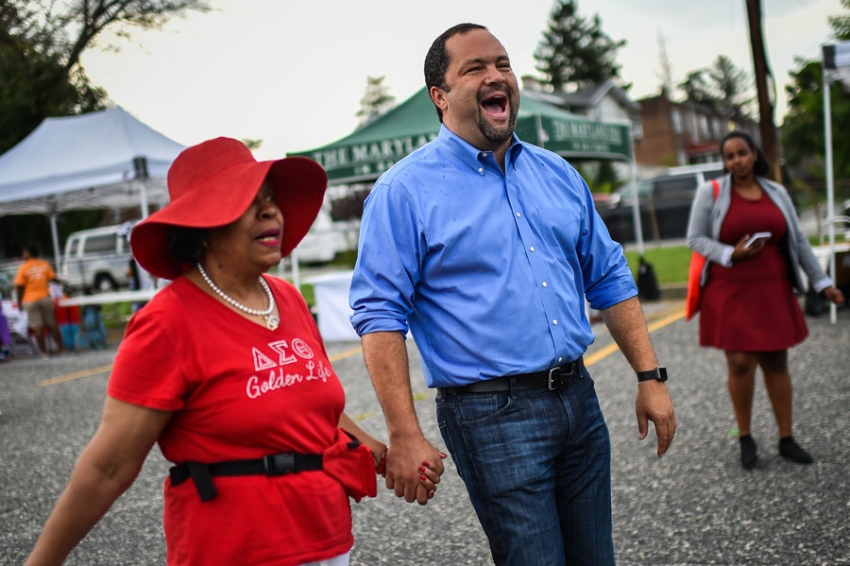 Bernie’s Platform Could Win in Maryland’s Gov. Race, With Support From Clinton Voters

Former NAACP President Ben Jealous is building a broad coalition of progressives to take out a popular GOP governor in Maryland.

Jealous says his coalition departs from traditional Democratic politics in its strong commitment to attacking poverty as the root cause of problems facing working people.

BALTIMORE—Bernie Sanders is not on Maryland’s gubernatorial ballot, but cornerstones of his 2016 platform will be. Ben Jealous, former NAACP president and Sanders loyalist, is running in the June 26 Democratic primary on a bold progressive agenda that includes free tuition at public universities, Medicare for all, an end to mass incarceration and a $15 minimum hourly wage. If he is successful, he will take on sitting Republican Gov. Larry Hogan in November.

During a February mini-debate at suburban Baltimore’s Goucher College attended by six of the seven Democratic candidates, Jealous laid out his progressive aims. The candidates received a restrained reception from the 50-odd students in the audience: It’s early in the race and none of the campaigns has caught fire.

Nevertheless, Jealous stands out. In 2016, he was Sanders’ most prominent African-American supporter on the national stage, serving as a delegate and working for the campaign. Jealous has been endorsed by Sanders and Our Revolution, the political organization that sprung from Sanders’ campaign, as well as Sanders’ key labor backers—the Communications Workers of America and National Nurses United.

Early polling places Jealous second to Rushern Baker III, a popular local politician from Prince Georges County in suburban D.C. Baker’s lead, however, is not overwhelming, and a Goucher College poll found that half the state’s Democratic voters have no candidate preference yet.

Jealous’ success may depend on his ability to mend the rift with the Clinton wing of the party. Maryland Democrats voted 63-33 percent in Clinton’s favor. Jealous tells In These Times that the state has moved on: “That was 2016. It’s 2018.”

Jealous appears especially well-suited to bridge the perceived tension between class and “identity politics” that made the Bernie-Hillary divide so fraught. His campaign announcement stated: “We must … make all forms of difference less important: whether it be race, class, region or religion.”

Jealous, 45, has worked for racial justice throughout his adult life. His parents first met as desegregation campaigners in Baltimore in the 1960s. He was raised in Monterey, Calif., and strongly influenced by visits with his Baltimore grandmother, a social worker and AFSCME member. As an undergraduate at Columbia University, he was briefly suspended for his role in student protests over a plan to demolish the famed Audubon Ballroom, where Malcolm X was assassinated. (The suspension didn’t prevent him from becoming a Rhodes Scholar). In 2008, at age 35, he was elected the NAACP’s youngest-ever president. His five-year tenure was seen as a rejuvenation of the organization and expanded its focus to stop-and-frisk, the DREAM Act and LGBTQ rights.

But the most relevant chapter of Jealous’ biography may be his time volunteering for Jesse Jackson’s 1988 presidential campaign as a teenager. “We’re modeling our campaign after Jackson’s Rainbow Coalition—and also on Obama’s 2008 campaign,” Jealous says. His coalition reflects that aspiration. Casa de Maryland, a champion for the Latino community, is a backer. He earned a nod from SEIU, which has a strong base among black voters in Maryland. Progressive Maryland and the Maryland Working Families Party, which represent the left flank of the state’s Democratic Party, are behind him. And climate change activist Bill McKibben and LGBTQ organizer Rea Carey are in Jealous’ camp.

He says his coalition departs from traditional Democratic politics in its strong commitment to attacking poverty as the root cause of problems facing working people. He links gun violence in the streets of Baltimore and the opioid crisis in rural Maryland to crushed hopes for a better economic future. “Young people who are full of hope don’t kill each other, and they don’t kill themselves,” he says. Restoring hope, he says, means “opening opportunity for everyone.”

SEIU 1199 spokesperson Girume Ashenafi says his union’s endorsement was “a no brainer. He’s the most progressive candidate in the field, no question about it.”

The Goucher College debate, however, highlighted a central problem for Jealous: a crowded field of candidates who all appear left-leaning. Raising the minimum wage, protecting Obamacare and investing in public schools were common themes, although Jealous’ plans sounded the most ambitious. His focus on mass incarceration also set him apart in the field of (mostly white) candidates.

Candidates drew the loudest cheers when they compared Gov. Hogan to Trump and called for his defeat. But Hogan is regarded as a formidable opponent for Democrats. The Cook Political Report, for example, rates the race a “Likely Republican” win even though registered Democrats outnumber Republicans in the state by about 2-to-1. Hogan has tried to maintain his popularity by adopting a moderate tone and keeping his distance from Trump. It is far too early to count the Democrats out, though, especially if there is a strong Trump backlash.

Neither Jealous nor Turnbull has held elective office before, and their opponents may exploit this as a weakness. Bill Fletcher Jr., a labor and social justice activist and a supporter of Jealous, notes that Democratic primary voters value “the sense that you’ve ‘paid your dues’ by party work.”

“Fortunately, Ben is a very hard worker,” Fletcher says. “If we still have five candidates in the race on primary day, then this thing can be won with 35 percent of the vote. He can get that.“

Or, as Bernie Sanders put it when endorsing Jealous, “Sounds like Maryland is ready for a political revolution!”