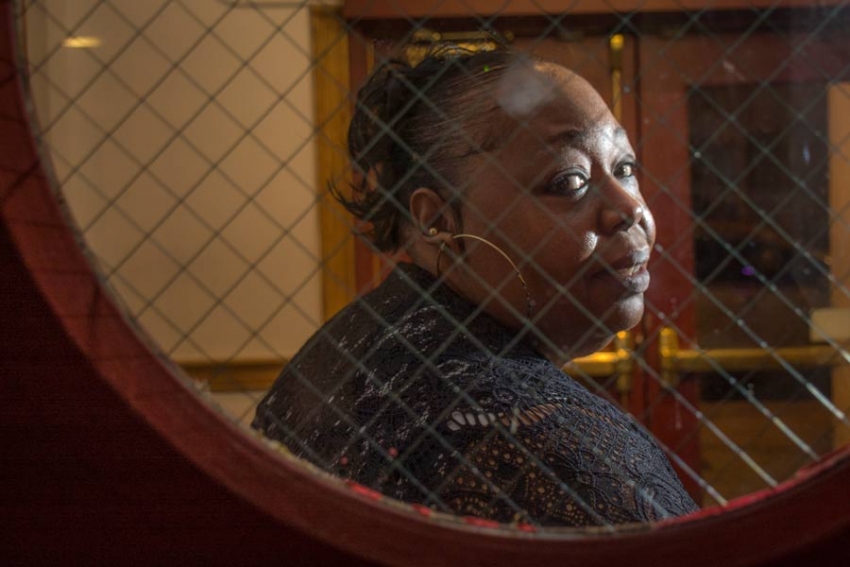 Lavette Mayes spent 14 months in pretrial detention in Cook County Jail, and is an organizer with the Coalition To End Money Bond. (Sebastian Hidalgo)

These Community Activists Won Bail Reform. Now They Have To Force Judges To Comply.

Thousands of people still sit in Chicago’s Cook County Jail because they are too poor to afford bail.

“We don’t want other families to go through this,” says Irene Romulo, an organizer with the coalition.

CHICAGO—Lavette Mayes remembers there were about 30 others lined up in a hallway, with their hands behind their back. One by one, they were brought before a judge. Mayes had been arrested in 2015 after an altercation with her 67-year-old mother-in-law that left both hospitalized.

Mayes, a 48-year-old mother of two whose marriage was unraveling, says she acted in self-defense.

“I’d never been arrested a day in my life. I’d only seen [bond court] on TV.”

Of her bond hearing, she says, “I was just shocked at the amount of time. It felt like I was at some kind of auction, it just went by so fast.”

Unable to pay, Mayes spent the next 14 months in pretrial detention at Cook County Jail. Under the law, Mayes was presumed innocent. Yet while awaiting her day in court, she nearly lost her children in divorce proceedings, and her business, a schoolvan transport service, fell apart as her vans were repossessed. She also burned through her $10,000 in savings.

“It just took a huge toll on my family,” says Mayes.

With assistance from the Chicago Community Bond Fund (CCBF), her family was able to pay it. She remained under house arrest until taking a plea deal Oct. 5, 2016. The CCBF raises money to pay bonds for those, such as Mayes, who can’t afford to. It’s one of 12 groups that make up the Coalition To End Money Bond, which formed in 2016 to address the systemic flaws in Cook County’s pretrial system. Cook County Jail holds approximately 7,500 people, more than 90 percent of whom are pretrial, far above the national average of 67 percent.

“We don’t want other families to go through this,” says Irene Romulo, an organizer with the coalition.

The coalition convinced the county’s Chief Circuit Court Judge Timothy Evans to order his judges to ensure “the defendant has the present ability to pay the amount necessary to secure his or her release on bail.”

“Defendants should not be sitting in jail awaiting trial simply because they lack the financial resources to secure their release,” Evans said. “If they are not deemed a danger to any person or the public, my order states that they will receive a bail they can afford.” The order went into effect Sept. 18, 2017.

The coalition had 70 volunteers attend bond court in August and September 2017, before and after the order’s implementation, diligently compiling data.

On February 27, they released their findings: Following Evans’ order, the rate of pretrial releases nearly doubled and the use of monetary bond dropped by half.

But the volunteers also noted a “lack of oversight and accountability,” and that some judges are still assigning high bails.

Another obstacle to reform is Cook County Sheriff Tom Dart, who has said his staff is overwhelmed by the hundreds of “violent offenders” charged with gun crimes who have been released from his jail with electronic monitoring as a result of Evans’ order.

“Moving forward, my office will closely scrutinize all individuals who are assigned to[electronic monitoring] by carefully reviewing their charges and criminal histories,” Dart wrote. “Those who are deemed to be too high a security risk to be in the community will be referred back to the court for further evaluation.”

Now, some people are detained on “administrative review” even after bond payment. Dart is now subject to a federal class action lawsuit filed on behalf of these detainees February 26.

Ultimately, the coalition wants to see an end to money bond altogether.

The New Deal Funded the Arts. The Green New Deal Should, Too.