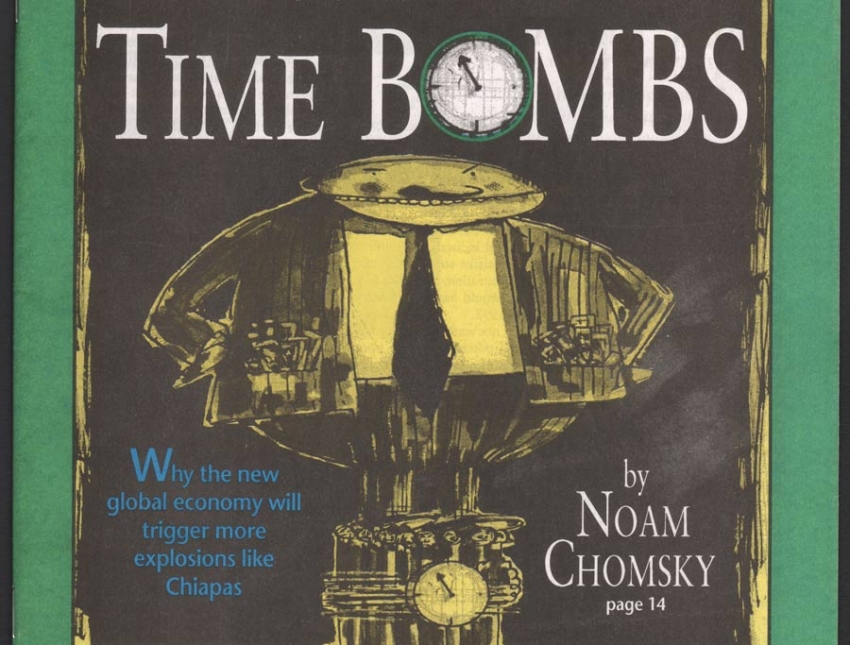 What Noam Chomsky Got Right About NAFTA

In 1994, writing for In These Times, Noam Chomsky predicted the trade deal would cause “rural misery and a surplus of labor” and “the fading of meaningful and democratic processes.”

On Jan. 1, 1994, the day the North American Free Trade Agreement (NAFTA) went into effect, the Zapatista Army of National Liberation—aka the Zapatistas—led an armed uprising in the Mexican state of Chiapas in protest.

In our Feb. 21, 1994, cover story, “Time Bombs: Why the New Global Economy Will Trigger More Explosions Like Chiapas,” Noam Chomsky predicted the deal would provoke more protests and a cascade of economic woes:

NAFTA is expected to drive large numbers of [Mexican] workers off the land, contributing to rural misery and a surplus of labor. …

The social and economic realities polarizing American society … have been carried another step forward by NAFTA. The concept of “efficiency,” as defined by those of wealth and privilege, offers nothing to the growing sectors of the population that are useless for profitmaking, and thus have been driven to poverty and despair. …

“Many economists think NAFTA could drag down pay, because lower Mexican wages could have a gravitational effect on the wages of Americans,” Steven Pearlstein reported in the Washington Post. That is expected even by NAFTA advocates, who recognize that less skilled workers—about 70 percent of the workforce— are likely to suffer wage loss. …Capital can move freely, and workers and communities suffer the consequences. … [These include] a low-wage, low-growth, high-profit future, with increasing polarization and social disintegration. Another consequence is the fading of meaningful and democratic processes as decision-making is vested in private institutions and the quasi-governmental structures that are coalescing around them, what the Financial Times calls a “de facto world government” that operates in secret and without accountability.

Not to mention, one might add, for the benefit of the wealthy.

So where has NAFTA gotten us today? How prescient was Chomsky?

The trade deal’s effects on Mexican farmers was much as predicted. According to the country’s Census, there were 4.9 million fewer family farmers in Mexico in 2007 compared to 1991—largely, says a Center for Economic and Policy Research study, due to an influx of U.S.- subsidized corn and other products. This, in turn, helped lead to a surge of migration to the United States, where the number of Mexican-born residents grew from 4.5 million in 1990 to 12.6 million in 2009.

In the United States, too, many of Chomsky’s worries have become reality. Rob Scott, a senior economist at the Economic Policy Institute (EPI), estimates that between 1993 and 2010, 682,900 U.S. jobs have disappeared due to trade with Mexico. An additional 3.4 million jobs—75 percent in manufacturing—were lost due to trade with China between 2001 and 2015.

“Trade is the single most important cause of manufacturing job loss,” Scott says. “It is an urban myth that it is caused by improvements in technology.

“The growth of trade, particularly imports from low-wage countries, explains 90 percent of the suppression of wages of non-college educated workers since 1995.”

Two-thirds of U.S. adults are non-college educated. According to EPI data, the bottom 70 percent of U.S. male workers saw their hourly wages, adjusted for inflation, rise only 6.6 percent between 1995 and 2013—while the top 5 percent of men saw their wages increase 27 percent. (Most manufacturing workers are men, and women have seen higher wage gains.)

Wisconsin, Michigan and Pennsylvania, says Scott, “have been hit hard by trade deficits with China and Mexico. … These voters are aware of the downward pressure on wages. They can’t get good jobs. Their children can’t get jobs and then move out of state. So those who are left are older and whiter, and they have seen their communities disintegrate.” These are the voters who gave Trump his victory.

Trump campaigned in opposition to NAFTA, and his administration is currently renegotiating the deal. U.S. Trade Representative Robert Lighthizer told CNBC on March 28 that he was “optimistic” the parties would come to some agreement “in the next little bit.” What that will look like is anyone’s guess.

But, Scott says, trade with China has had an even bigger impact on U.S. jobs. There, too, Trump is playing to his base, announcing tariffs on steel and aluminum imports. While EPI economists have written in favor of tariffs, they are controversial among progressives.

Regardless of tariffs’ economic merits, it’s clear Trump is using anger at bad trade deals to stoke nativism and xenophobia. The rise of rightwing nationalism may be NAFTA’s latest ticking time bomb.