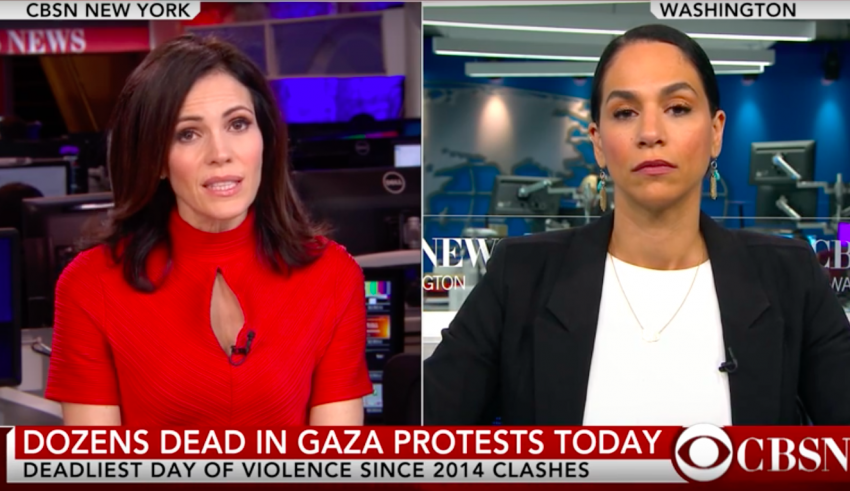 "This is a decades-long siege of Gaza, 50-year occupation and 70-year exile, and the only time Palestinians matter is when they're being killed or appearing as a threat to Israel.”

Since Palestinians in Gaza launched the Great Return March on March 30, Israel has killed at least 109 Palestinian protesters and wounded 12,300 others, according to Gaza's Health Ministry. Instead of probing the Israeli government and its U.S. backers about this mass atrocity, American media outlets are far-too-often implying that Palestinian protesters are responsible for their own deaths—falsely portraying the massacre, in which zero Israelis have died, as “clashes,” and painting Palestinian protesters as pawns of Hamas, rather than legitimate civil society activists.

Noura Erakat, a Palestinian-American human rights attorney, activist and assistant professor at George Mason University, tells In These Times that widespread dehumanization in the U.S. media stems from the fact that “we don't turn our gaze to Palestinians unless there’s something happening to Israelis or in regard to U.S. relations. Palestinians appear as shadows. This is a decades-long siege of Gaza, 50-year occupation and 70-year exile, and the only time Palestinians matter is when they're being killed or appearing as a threat to Israel.”

Erakat is in a position to know. Amid the constant stream of misinformation, she was featured on CBS on May 14 to give the “Palestinian” reaction to the ongoing protests in Gaza and the Trump administration’s inauguration of the U.S. embassy in Jerusalem. During the interview, Erakat was hit with nearly every trope about the conflict currently circulating in the U.S. media—and she crushed them on by one:

“They had me on their program and literally asked me about Hamas amid civil mass protests. On March 30 when at least 14 Palestinians were gunned down, Israel explicitly said it would not investigate itself nor allow for an international probe, meaning that they defend their lethal use of force. Six weeks later, when they escalated, the questions should be about Israel’s violation of international law. The fact that they asked me about Hamas shows that they are either willfully misleading their audience, or they just aren't doing the work. Both are horribly irresponsible.”

Tens of thousands of protesters in Gaza are calling for an end to Israel’s military siege, which has led to severe gas and water shortages, as well as economic devastation, for the roughly 2 million people living in the strip. Demonstrators are also demanding the right to return to the land Israel evicted them from 70 years ago during the mass-expulsion known to Palestinians as the “Nakba,” or catastrophe.

Instead, U.S. press coverage of these protests is so dismal that, according to Erakat, “By the time they bring me on, I'm having to serve as a corrective.”