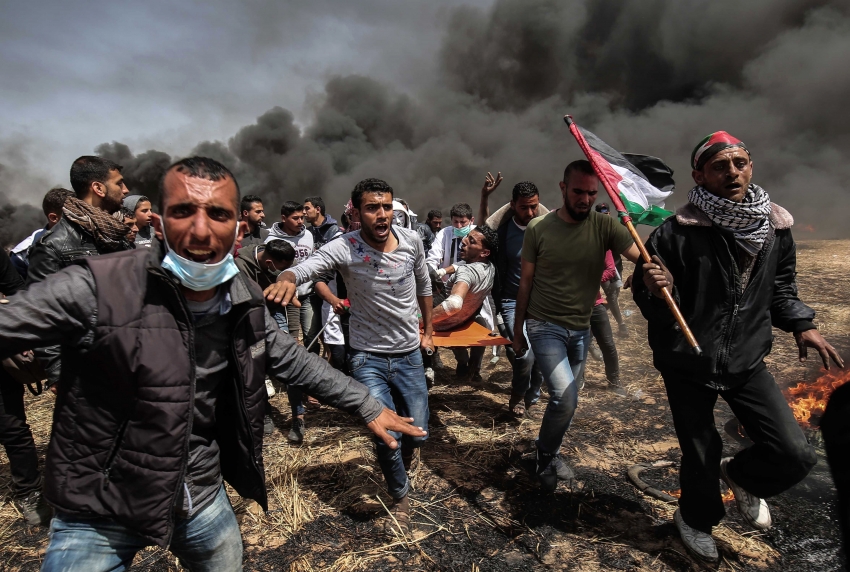 An injured Palestinian protestor is carried by fellow demonstrators during clashes with Israeli security forces following a demonstration calling for the right to return, east of Khan Yunis, in the southern Gaza Strip, on April 6, 2018. (SAID KHATIB/AFP/Getty Images)

Here are the mainstream media myths to look out for.

It is inhumane to expect a massacred population not to resist.

Since the beginning of the Great March of Return on March 30, Israel has killed over 100 Palestinians and injured over 12,000. Only one Israeli, a soldier, has been injured in the context of the march.

Most mainstream western media coverage of Gaza’s march has systematically decontextualized the mass civilian protest, brushed off Israel’s weekly massacres as “clashes,” reified the boundary fence between Gaza and Israel a “border,” presented Palestinian protesters as “Hamas pawns” passively “dying for photo ops” and deployed other strategic falsehoods to dehumanize Palestinians fighting for their freedom. The net effect is the demonization of the march and the absolution of Israel of its murderous assault.

Some outlets have even portrayed the protests as a reaction to the U.S. embassy move to Jerusalem, which was planned on the annual date commemorating the Nakba: Israel’s 1948 ethnic cleansing of over 700,000 Palestinians. According to Amnesty International, the embassy move “intentionally undermines Palestinian rights and in effect condones decades of violations by Israel.” And yet is just a manifestation of the larger Israeli policies of expansionism and ethnic cleansing, which have distorted the territorial integrity of the West Bank and devastated Gaza.

What are Palestinians in Gaza protesting?

Since Israel imposed a blockade on Gaza in 2007, it has waged routine invasions that level infrastructure and kill thousands—a policy described by some Israeli analysists and politicians as “mowing the lawn.” According to the UN, Israel’s attacks, coupled with the siege, have rendered Gaza “unlivable.” Over 96 percent of Gaza’s water is unsafe for drinking and 57 percent of households are food insecure.

The Gaza Strip is often called the world’s largest open-air prison. Israel controls the maritime, aerospace and land borders of the coastal enclave.

The Israel military defies international maritime law by restricting Gaza’s fishers to six nautical miles from their shore, rather than the 20 stipulated in the Oslo Accords (signed between Israel and the Palestine Liberation Organization in the early 1990s). Moreover, it often guns down fishers and their boats even when they abide by its limitations.

Israel determines who and what can enter or exit Gaza. They control shipments of fuel, medicine, building supplies, and food—at one point allowing only the minimum calories each person in the strip could consume without starving.

The only two “openings” to the outside world are the Erez checkpoint and the Egyptian-controlled Rafah crossing. The former is the only point of passage for travelers between Gaza and Israel and almost impossible to obtain a permit to. The latter opened for only 35 days in all of 2017.

Almost 70 percent of Gaza’s population consists of refugees from other Palestinian cities who were forcibly displaced to the strip by Israel. Palestinians are stuck in Gaza, and they are demanding their right to return to their homes as enshrined in international law.

In their coverage of the March, most mainstream media deployed passive language that hid Israel’s agency in its murder of Palestinian protesters, journalists and paramedics. One such term which obfuscates the extent of this one-sided massacre is “clashes.”

The Guardian, the BBC, ABC News and others reported on “clashes” in their headlines. This puts no clear emphasis on the victims, the perpetrators and the magnitude of the assault. One is led to believe that Israelis and Palestinians inflicted comparable damage and suffered comparable casualties.

The Economist even called on “Palestinians to take up genuine non-violence”—echoing Israeli army propaganda that the march was “violent” and brushing over the fact that Israel has subjected Gaza to its deadliest days since its 2014 assault on the strip.

It is inhumane to expect a massacred population not to resist.

One cannot equate the use of stones and molotov cocktails with the use of sniper-rifles and drones. These do not amount to two equal “clashing sides.” The former has proved incapable of inflicting violence, while the latter has enabled the summary executions and maiming of vast numbers of the Gazan population.

The fact is that Palestinians were the only victims of weekly massacres that only Israel committed. The death toll speaks to this: over 100 Palestinian dead to 0 Israelis.

Given the gross power disparity, the safety of the Israeli soldiers, and Israel’s “shoot-to-kill policy,” surely the term “massacre” is far more appropriate.

In the same vein, outlets have also used misleading, passive language that absolves Israel of its agency and blames Palestinians for the violence.

In a tweet emblematic of this trend, The New York Times wrote, “Sporadic rifle fire from the Israeli side of the Gaza border made clear that the Palestinian protests could elicit the sort of response that killed 20 people a week ago.”

Firstly, the term “sporadic rifle fire” masks both the perpetrator, Israel, and the systematic nature of the shootings. The article suggests that “rifle fire” simply exists on its own, with no agent creating it. This is especially farcical considering a now-deleted tweet from the official Israeli Defense Forces that “nothing was carried out uncontrolled; everything was accurate and measured, and we know where every bullet landed.”

Moreover, describing the rifle fire as “from the Israeli side of the Gaza border” pawns off responsibility from Israel by evoking the imagery of Israel’s “bad neighborhood” and of border disputes. Given the preponderance of drone warfare and snipers which have distanced Israeli soldiers from the border, this may simply have read, “from Israel”.

Thirdly, rather than kill and maim hundreds, the rifle fire simply “made clear” that the Palestinians were responsible for their deaths. It showed that they “could,” and in fact did, “elicit” the Israeli “response.” This evokes motifs of the fatalistic, uncivilized Palestinians “dying for a photo opp”. In this way, one doesn’t question the brutality of the response, but only the Palestinians who “elicited” it.

Fourth, and perhaps most egregious, the “people” killed were all Palestinians.

Media outlets frequently refer to the site of the “clashes” or “confrontations” as the “Gaza border.” The New York Times often uses that term, “Israeli Military Kills 15 Palestinians in Confrontations on Gaza Border,” they reported on the first week of protest. Doing so, however, implies zones of sovereignty for the respective states that do not exist across the Gaza-Israel fence.

As mentioned above, the siege has resulted in Israeli control over Gaza’s land, aerospace and maritime borders. In addition, Israel has imposed a buffer zone of uncertain size on Gazan territory, further illustrating the myth of demarcation of sovereignty.

Moreover, Israel has never defined its borders nor accepted the 1949 Green Line which the international community recognizes: a fact evident in its creeping annexations of East Jerusalem, segments of the West Bank and the Syrian Golan Heights.

The protests are slated to continue on June 5 to commemorate Israel’s 1967 annexation of the West Bank, Gaza and the Golan Heights. The international community must bear witness and hold Israel accountable for its atrocities against the civilian population of Gaza. This requires seeing through media tropes that dehumanize Palestinians and whitewash Israel’s abuses.

Tamara Nassar is an assistant editor at The Electronic Intifada. She can be found on twitter @TamaraINassar.