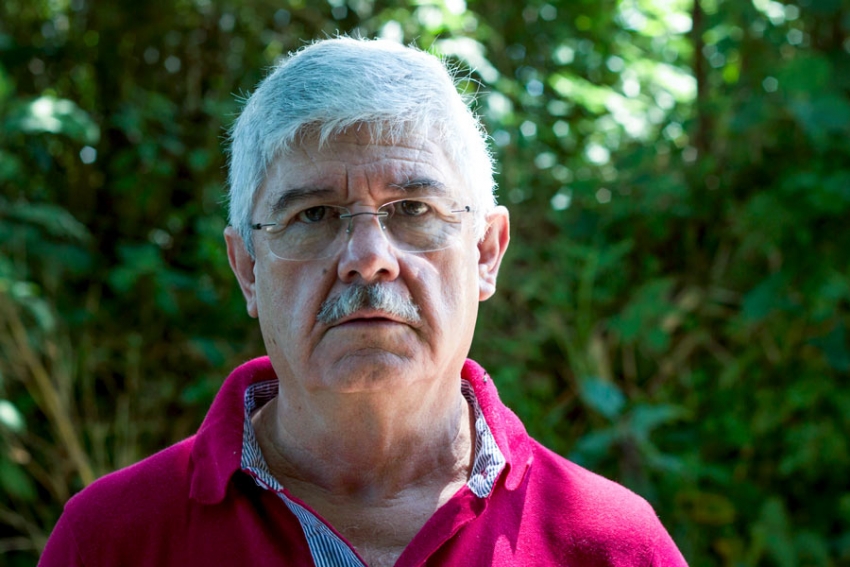 The government is “sending us a message,” says Alvaro Águilar, “that we are going to suffer the consequences for our resistance.” (Photo by Ana Gutierrez)

An Indigenous Cooperative Is Dodging Bullets To Defend Their Land

In Cuetzalan, Mexico, environmentalists are risking their lives to fight destructive energy projects.

Águilar believes that the local government is giving tacit or explicit go-ahead to criminal organizations to break the community’s resolve.

CUETZALAN, MEXICO — One evening in early March, in the northern mountains of Puebla state, gunmen ambushed a van belonging to the indigenous Union de Cooperativas Tosepan. Bullets struck one of the van’s tires, the driver’s side window and the driver’s arm before he managed to escape, careening to safety over a mile of winding mountain roads.

The driver, who asked not to be named, was likely not the intended target. Only by chance was the red Town and Country’s usual driver, cooperative leader Alvaro Águilar, not behind the wheel.

White-haired and bespectacled, Águilar might not be the type you’d expect to find on a hit list. But in Mexico, being an environmental activist means living with a target on your back. In 2017, indigenous environmentalist Isidro Baldenegro was killed in Chihuahua. This January, indigenous leader Guadalupe Campanur was found strangled to death in Michoacan. On May 14, Manuel Gaspar, a lawyer allied with Águilar and the Tosepan cooperative, was found stabbed to death in a hotel. And on May 30, an activist against a Puebla hydroelectric project was found killed as well.

Cuetzalan, where the Tosepan cooperative is based, is a small, picturesque coffee-producing town. A popular tourist destination, it gained national fame for blocking a proposed Walmart store in 2012. Águilar and Tosepan, whose members are from the Nahuatl and Totonaca indigenous groups, were key organizers in that struggle. Now they face another threat: an electrical substation proposed by Mexico’s Federal Electricity Commission (CFE).

CFE says the substation is intended to improve electricity delivery, but community members insist their supply is fine. They believe the real goal is to eventually route power lines to and from potential hydropower, fracking and open-pit mining projects. Such projects would mean widespread environmental disruption, threatening Cuetzalan and neighboring communities’ water supply as well as their livelihoods: small-holder farming, coffee production and ecotourism.

The Mexican constitution and international law both require that communities with majority indigenous populations, like Cuetzalan, be included in development decision-making. Although the project was rejected in nine public assemblies in 2017, CFE continues to pursue it.

When the bulldozers arrived in late 2016, Águilar says, Tosepan and other groups convinced the workers to quit. A sympathetic farmer let the protesters build a small encampment near the construction site, where they remained for nearly a year, even after CFE lost its permit.

But the government remains determined. Earlier this year, Mexico’s attorney general and CFE filed suit against Águilar and other community leaders, alleging they used violent tactics to obstruct the substation project—charges they deny.

Águilar believes the lawsuit and van shooting are connected, and that the local government is giving tacit or explicit go-ahead to criminal organizations to break the community’s resolve. “They’re sending us a message,” he says, “that we are going to suffer the consequences for our resistance.”

Cuetzalan Mayor Oscar Paula Cruz denies this allegation, maintaining that his government “work[s] for everyone.” But Tosepan members say the municipal police have not investigated the attack. Puebla’s attorney general’s office did not respond to multiple requests for comment.

This targeting of environmentalists fits a pattern. The Canadian mining company Blackfire and employees of the Canadian embassy, for example, collaborated to suppress protests against a barite mine in Chiapas, wiring the local mayor money and pressuring him to quash the opposition. Activist Mariano Abarca’s complaints of death threats went unheeded, and he was murdered in 2009.

Three days after the van shooting, Tosepan leaders Maria Luisa Albores and Águilar were caravanning home from work, part of new security measures. When they stopped in front of Albores’ house, an unfamiliar vehicle pulled up as well, its headlights shining as Albores’ younger son opened the front gate. Alarmed, Albores ordered her son back inside. The vehicle made an abrupt U-turn and vanished into the night.

Ethan Bien is a journalist and documentary filmmaker based in Maine and Mexico.