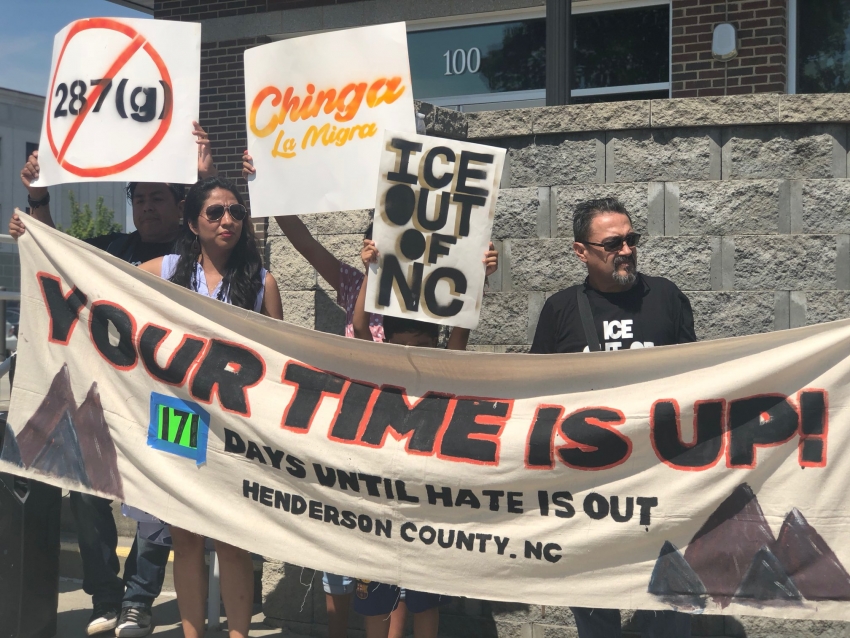 Amid the horror of family separation, a grassroots network spearheaded by Mijente is launching a national tour of resistance.

“What we want to tell people is not to be afraid.”

The stories emerging from the southwestern border of families torn apart by immigration authorities have sent shockwaves through the national media. But the bleak images of locked-up children don’t capture the full landscape of anguish facing immigrant communities nationwide.

The parents of migrant children are set to endure a separate nightmare in the coming months, fanned out across the country to detention centers where they will await legal judgement. Far from the border, the crisis bled into the Pacific Northwest in early June as scores of new detainees were funneled into the federal immigrant detention center at SeaTac, a city on the outskirts of Seattle. The transfer was part of a massive effort by the Trump administration to warehouse as many newly arrived migrants as possible, pending prosecutions for allegedly illegal border crossings under its “zero-tolerance” agenda.

The policy is triggering an explosion of migrant incarceration, even though many of the apprehended are refugees fleeing mass violence, rape, conflict and persecution in Central America and other parts of the Global South.

As ICE rolled into the SeaTac with its human cargo, protesters from Northwest Detention Center (NWDC) Resistance arrived to greet them. The rally drew community members from diverse backgrounds, some of them spurred by the headlines to protest, others long-time activists who had campaigned for years against the region’s other immigrant prison, the Northwest Detention Center, which has become notorious for inhumane, abusive conditions and riotous protests by detainees. The action kicked off a national tour of resistance, Chinga la Migra (Fuck Border Patrol), spearheaded by national advocacy network Miijente, to promote solidarity across grassroots migrant resistance movements nationwide that are defending their communities from Immigration and Customs Enforcement (ICE).

Maru Mora Villalpando helped organize the rally with the Chinga la Migra tour, not just to show solidarity with the newly arrived detainees, but to affirm her own presence on U.S. soil. An undocumented mother of a US citizen daughter, Mora is fighting for others while facing possible deportation herself.

Following the rally, Villalpando told In These Times, “This is just another signal of how the Department of Justice has taken advantage of their powers [to carry out] this war against immigrants. … They have all these tools and they're using them against us. And they're deciding that now everybody should go to federal prison.”

Under the administration’s new zero-tolerance policy, focused on prosecuting virtually every arrested border crosser, the Departments of Justice and Homeland Security are systematically splitting up parents and children, allegedly to streamline removal proceedings. Children are housed in separate federal shelters while parents are processed, with industrial efficiency, through group hearings in heavily backlogged immigration courts.

Although the Obama administration also arrested and detained immigrants on a massive scale, general asylum cases were processed through civil court procedures, rather than the punishment-focused criminal prosecution. Many families were detained under Obama, but at least they were kept intact. And while the previous administration did enact some modest reforms to detention policy under public pressure, Trump has sharply reversed course as both detention and enforcement efforts surge.

Now, Villalpando says, Sessions has obliterated previous hard-fought reforms enacted under the last administration. “He is the jury, the prosecutor, he's the jury and he's the judge,” she says, adding: “That's why we were calling on Obama to dismantle the machine before these white supremacists were taking over.”

As of early June, more than 1,600 ICE detainees have been shunted into federal prisons, where their stay will supposedly be temporary, according to ICE. Separated children have been warehoused in federal facilities, including a surreal makeshift “childcare” home in a cheerily repainted converted Texas Walmart store.

Parents are offered more austere conditions, meanwhile, at the federal SeaTac facility, which has opened just over 200 beds to house migrants freshly transferred from the border. Washington congressional representative Pramila Jayapal arragned a rare brief visit to the facility last week, and encountered about 170 women, mostly asylum seekers, who had been torn from their families, isolated and traumatized while they churned through the chaotic court process.

“Thirty to 40 percent of these women came with children who had been forcibly taken away from them,” Jayapal told The Nation. “None got a chance to say goodbye to their children. … This separation of children from their parents is really a form of torture.”

Many communities—including King County, which houses part of SeaTac—brand themselves as “sanctuary” jurisdictions, which seek to shield immigrants from ICE investigation. But the County also partners with ICE to host detention centers, which form the core infrastructure of the deportation regime.

When it comes to enforcement actions, even jurisdictions claiming to not cooperate with ICE agents are still subject to federal intervention. At another stop planned on the tour, Chicago, protesters will condemn city authorities for partnering with ICE on police anti-gang operations, despite liberal politicians’ claims of opposing Trump’s crackdowns while clandestinely exposing immigrants to futher risk.

Today, immigrant communities have found their most reliable allies are not reformist politicians, but the grassroots mutual aid networks they have built up over the years through community coalitions linking clergy, schools, labor and other groups to oppose police collaboration with immigration enforcement, stage direct actions, and provide social support for threatened families. These bottom-up networks form the solidarity movement that the Chinga la Migra tour seeks to champion.

For NWDC Resistance, grassroots struggle has always been both necessary and strategic. “We have no money, we have no resources,” Villalpando said. “We only have whatever we have, which is our bodies.” And their movement is inclusive, promising to support all migrants whether they go public to protest ICE or decide to stay underground to keep their families safe. “What we want to tell people is not to be afraid,” said Villalpando, adding that for the authorities: “That's how they have won for such a long time, to keep us afraid, and to hide their practices.”

The intensification of detentions—with some 50,000 border apprehensions and nearly 2000 kids separated from April 19 to May 31—is making it even harder to organize immigrant communities, which are stratified geographically and separated. Courts are granting reprieve haphazardly and arbitrarily, many lack access to legal counsel, and posting bail is often prohibitively expensive. Villalpando noted that all her legal appeals and demands for reprieve have been denied. “And this is me, with all the support and public pressure and a legal team,” she said, adding: “Now think about all those people that are crossing the border, and are here right now. They have no legal representation, they don't know the system, so this is like a big hammer coming down on us.”

But the hammer is also galvanizing a national movement, and the Chinga la Migra tour seeks to highlight those common struggles as it runs through Chicago and rural south. In North Carolina, activists in Alamance County joined with Mijente activists on June 13 to rally against the federal 287g program, which facilitates joint operations between local police and ICE agents.

In front of the local courthouse, a mariachi band blasted a celebratory tune as Kischa Loreé Peña, an organizer with the grassroots group Down Home NC, spoke before a banner emblazoned with, “We Will Not Go Back.” She talked about what her own family had in common with her migrant neighbors: “We know we're fighting white supremacy, [against] the Confederate flags up the street … As a mother I understand what it's like to fear police and racism with my son walking the streets, and I think that no one should live like that…we believe that an attack on one of us is an attack on all of us.”

While the Trump administration’s border war threatens to break apart the country, in many communities, the struggle has instead tied together neighbors who hold their ground in the place they call home.