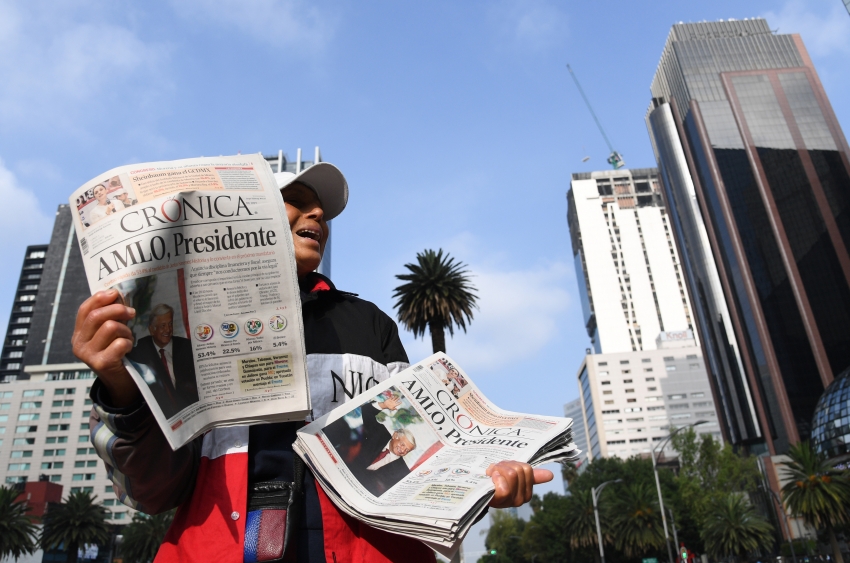 A vendor sells newspapers fronted by the results of the presidential election in Mexico in which leftist Andres Manuel Lopez Obrador claimed victory, in Mexico City, on July 2, 2018. (ULISES RUIZ/AFP/Getty Images)

Andrés Manuel López Obrador won on a promise to reverse the disastrous policies of privatization and rampant corruption that have dominated Mexican politics for decades.

“The PRI had their time to govern. But the people are tired of the PRI and their politics.”

In a historic vote on July 1, Mexican voters elected their new president: Andrés Manuel López Obrador (popularly known as AMLO), the 64-year-old, center-left former Mayor of Mexico City originally from the southern state of Tobasco. Together We Will Make History, a coalition of the center-left National Regeneration Movement (MORENA), the conservative Social Encounter Party (PES) and the leftist Labor Party (PT), successfully organized a campaign to challenge the Mexican political status quo, building their platform in opposition to the disastrous policies of privatization and rampant corruption that have dominated Mexican politics for decades.

AMLO’s election is an unprecedented landslide in Mexican history, with 56 million of 89 million eligible voters participating. He will assume the presidency on December 1.

Just hours after voting centers closed, José Antonio Meade, the Presidential candidate for the Partido de Revolución Institutional (PRI), took to the stage to concede defeat, stating, “the exit poll's tendencies are not in our favor.” The PRI is a centrist party with deep business ties that grew out of the Mexican Revolution between 1910-1920 and has dominated Mexican politics since 1929.

Ricardo Anaya was the presidential candidate for the Partido de Acción Nacional (PAN), a center-right conservative party that has maintained influence in Mexican politics since 1939 and ended the PRI’s decades-long hold on the presidency in 2000. Coming in second place, Anaya conceded defeat and congratulated AMLO on his overwhelming victory.

AMLO’s Morena party is relatively young in Mexican politics, only registered as a political party in 2014. Nonetheless, it scored major victories across the country, winning the gubernatorial races in the states of Chiapas, Tabasco, Mexico City, Morelos and Veracruz. The party also won a majority in the Mexican Congress and Senate, gaining at least 127 seats in Congress and at least 48 seats in the Senate.

As the count became official, supporters of AMLO celebrated across the country, holding rallies in Mexico City.

“I will do another tour of the country as president-elect,” López Obrador, who traveled extensively during the campaign to learn the problems facing communities, told supporters at midnight in the Zocalo in Mexico City. “There will not be a divorce now that we won and we’re forming a government. No, this is the government of the people, for the people and by the people.”

“Now comes the work of transforming the politics, society, public services and, of course, education,” Carlos Barrios, a representative from Sección XXII who asked for a pseudonym due to concerns of political repercussions, told In These Times. “But the CNTE will continue to work from within as well to democratize the SNTE and the education systems of the country.”

For the majority of Mexicans, AMLO reflects hopes for change in the Mexican political system. His victory also serves as a rejection of the governing of the PRI, PAN, and of the neoliberal policies such as the privatization of social services that both parties have implemented since the 1980s.

“[AMLO] had a proposal that I feel is the mostly likely to be fulfill, and one that would benefit women, children, small farmers, and the population in general across Mexico,” David, a 23-year-old education student from northeastern Chiapas who voted for López Obrador, told In These Times.“The other candidates have occupied positions in the government, and they did not managed their positions well in part due to the corruption. This was a major reason to not believe in them.”

AMLO campaigned on promising to roll back the policies of privatization that have gutted social services since the 1980’s, especially the privatization of energy resources, water and education. In February 2018, he made an agreement with teachers across Mexico to cancel controversial privatizing education reforms. In another rally, he declared that his administration would be the end of privatization across the country.

“The education reform was nothing more than a labor reform,” David told In These Times. “The reform did nothing to improve the educational situation in the country. This is why so many teachers oppose the reforms. I believe he will repeal this reform that hurts the economies of teachers.”

The election of AMLO could help improve the security situation in Mexico, which has suffered greatly from the violence caused by the Drug War since 2006. Some are hopeful that the president will de-escalate and de-militarize the drug war, although it remains to be seen how his administration will proceed on this front.

Ahead of the election, the Mexican business community attempted to derail the popularity of AMLO by suggesting he would hurt the economy of Mexico, Latin America’s second largest economy. Alberto Bailleres, Mexico’s third-richest man, even attempted to discourage the workers in his chains from voting for AMLO. The National Institution of Elections (INE) was forced to intervene to stop the campaign of disinformation against the popular candidate.

An elderly hotel owner in San Cristobal de las Casas, Chiapas, who asked not to be named, put it more bluntly: “The PRI had their time to govern. But the people are tired of the PRI and their politics.”

Voting began at 8:00 a.m., but many polling stations opened up late across the country, to the frustration of many voters. According to interviews with 15 people, some voters waited as long as two hours to cast their ballots in San Cristobal de las Casas, Chiapas in the polling stations.

The election was marred by accusation of vote buying, political murders, the ballot theft and burning, and insufficient numbers of ballots for voters at many polling stations. The lead-up to the election saw unprecedented violence against those running for office. Telesur reported that there were over 500 documented attacks and threats against politicians, including an attack against two candidates for Morena in Oaxaca on June 25. More than 50 people were assassinated on the campaign trail.

Many voters ultimately turned to Morena and AMLO due to the failure of the Mexican government of Enrique Pena Nieto to the disasters created by the earthquakes in Mexico City, Oaxaca, and Chiapas.

“The relief did not make it to the people that were affected by the earthquake,” David told In These Times. “The failure came from the government. Considering this, many people were driven to change this situation.”

Will AMLO Respond to the Central American Exodus With Compassion—Or Militarization?