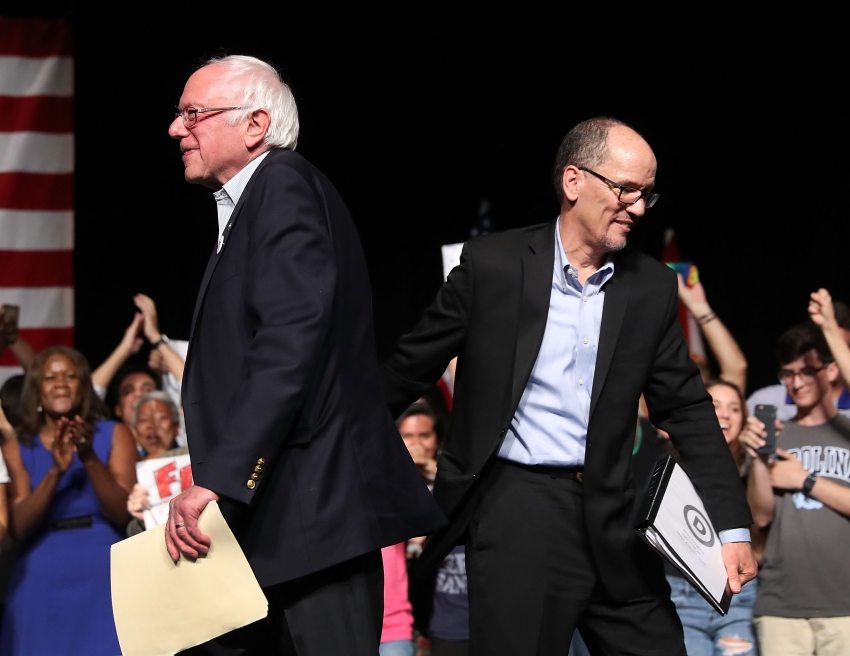 The DNC's summer meeting was more proof that the Democrats' Sanders wing is ascendant in the party. (Getty Images)

From stripping power from superdelegates to enforcing financial oversight, backers of Bernie Sanders scored a number of huge wins at the DNC summer meeting. And they could have a major impact in 2020.

This package of reforms is just a starting point for a wholesale transformation of the party.

This past weekend was an auspicious date for the Democratic Party to attempt to come together in the name of unity. As DNC members gathered at the Hyatt Regency Chicago to discuss whether or not to pass a package of reforms spurred by the turbulent 2016 primary contest, it couldn’t have escaped them they were doing so not only in the same city that 50 years ago saw party divisions boil over into battles between demonstrators and Chicago police, but on the very same date this chaos began to unfold.

Five decades later, with nary a brawl in sight, the party successfully put in place a handful of sweeping reforms that its members hope will move the Democrats’ two predominant wings—those represented chiefly by Hillary Clinton and Bernie Sanders—toward greater unity and, more importantly, serve as the first step toward fixing what some progressives say is a broken party.

While the result is clearly a major victory for the Sanders wing of the party, Larry Cohen—former Sanders campaign advisor, chairman of the Sanders-aligned Our Revolution, and the vice-chair of the Unity Reform Commission—was quick to offer credit to the other side.

“While Our Revolution helped lead the allies supporting this actively, it would not have been possible without DNC Chairman Tom Perez and his all-out mobilization,” he says.

The most attention-grabbing measure was the decision to strip so-called superdelegates—the 700 or so elected officials and party apparatchiks whose outsize influence over the nominating system became a flashpoint for progressive frustration during 2016—of significant power. While superdelegates still hang on to their perks and their voting power on issues like the party platform, as a result of the DNC decision, they are now barred from voting on the first ballot, and can only determine the electoral outcome in the case of a contested primary.

Reining in of superdelegates’ power was a key priority for the Sanders wing of the party, which views their existence with suspicion. As I reported for In These Times in May 2016, superdelegates were expressly created by the party establishment in 1980 as a way to stop what one of their creators termed “outlier candidates,” such as George McGovern and Jimmy Carter.

While defenders of superdelegates often claim the group has never decided a race, this isn’t strictly true: Superdelegates openly boasted in 1984 that they had used their influence in that year’s primary to ensure Walter Mondale, the party establishment choice, ended up the nominee.

Superdelegates were not nearly as influential in 2016, yet their overwhelming support for Hillary Clinton—along with the media’s habit of counting them in the delegate totals throughout the race—created an aura of inevitability for Clinton that critics feared was driving down voter participation. The Associated Press infamously called the race for Clinton on the back of superdelegate totals just one day before voting in the California primary began.

The measure was the most fiercely contested one. Californian Bob Mulholland, a member of the DNC and as such himself a superdelegate, had earlier charged that the attempt to eliminate superdelegates was a “Putin operation,” and insisted in advance of the meeting that “we’re going to fight it like hell.” Other elected officials called it an “insult” and said it would “do terrible damage to party harmony.” Congressional Black Caucus Chairman Cedric Richmond, a pro-Clinton superdelegate in 2016 who had likened Sanders’ policies for tuition-free college and universal healthcare to asking for a “free car and a free home,” called it a “solution in search of a problem.”

Yet while opponents attempted to throw procedural roadblocks to the reforms, they were soundly beaten back, with DNC members overwhelmingly voting in their favor. Critics spent much of Saturday insisting on a two-thirds vote to enact the measures, yet they ultimately passed with around 75 percent support.

While the Sanders wing of the party counted superdelegate reform as a key victory, its members stress that it was neither the only one, nor even the most important.

“That’s not the crux of what’s happening in the party,” says Nomiki Konst, a former Sanders delegate and member of the DNC Unity Reform Commission, even as she calls the superdelegate system “an embarrassment to the party.”

Sanders backers point to the reforms around transparency as at least equally important, requiring the DNC to be more transparent around its finances, operations and relationship with presidential candidates. The reform was partly a response to the revelations last year by former interim DNC chair Donna Brazile that the DNC and Clinton campaign had secretly signed a joint fundraising agreement in 2015 giving the campaign control of key aspects of the DNC in exchange for raising and investing money for it. In practice, much of the cash Clinton raised for the DNC ended up being spent on her own campaign, with only a trickle making it to state parties—less than half of one percent.

Konst also sees this as a crucial step toward building a nationwide presence for the party, and reorienting it from the almost exclusively presidential focus it took under President Obama.

“That’s a billion-dollar industry,” she says of this laser focus on the presidential race. “The Democratic Party has become an extraordinary money-maker for consultants.”

“The biggest thing here is that we get rid of candidate addiction and start talking about party-building,” says Cohen

Also significant are the reforms around primaries and caucuses. Caucuses, which favored Sanders during the 2016 primary, have long been criticized as flawed and undemocratic, and the latest reforms mandate caucuses include absentee voting measures, as well as a process for a written vote in the case of a recount.

“The caucus states will do it because they won’t get seated otherwise,” says Larry Cohen.

This was a major demand from Sanders backers owing chiefly to what Cohen calls the “shenanigans” in the 2016 New York primary, when more than 125,000 Democratic voters were stripped from the rolls, and frustrated Sanders voters found on election day that they had the missed the deadline to register as Democrats in the state. New York is the only state where registered voters have to declare their party affiliation more than six months in advance, and there is no in-person registration—all provisions that critics say disenfranchise younger voters particularly. But while New York is a dramatic example, numerous other states set deadlines for party registration well before election day.

“If you want to build a party, you don't throw up roadblocks to join it,” says Cohen.

But changing these provisions won’t be easy. Primaries are governed by state governments, many of which are under the control of Republican governors and legislatures, ironically a consequence of the very decline of the Democratic Party critics say such roadblocks reinforce.

Cohen says pressuring state governments to open up primaries will be a priority of Our Revolution and other groups from here on out. But activists like Konst are skeptical about the planned push to replace caucuses with primaries, given Republican control of the legislatures that will govern the new primaries in some of these states.

“It was not something we pushed for,” she says.

Both agree, however, that this package of reforms is just a starting point for a wholesale transformation of the party. Cohen says the next step will be returning to the issue of corporate influence, one that flared up recently after the DNC, at Chairman Perez’s urging, reversed a ban on fossil fuel industry donations. Cohen ultimately wants to see a turn to a small donor base, and for DNC officials to start telling candidates they’ll only get popular support by refusing corporate money.

The ultimate goal, however, is to restore the party’s national presence and grassroots support.

“What this is about is to say ‘Hey, this party is opening up to party-building’,” says Cohen. “Run people not only for the precinct, but at the county level, and from there. That’s really the building block.”

“The Democratic Party doesn’t exist in most parts of America, honestly,” says Konst, citing research undertaken by the Unity Reform Commission. She urges progressives and Democratic Socialists of America (DSA) members to get involved in the Democratic Party and try to become DNC members as a first step toward reversing this process. Such a strategy could help engineer a shift in the party from the inside, while also pressuring it from the outside.

“This is a fundamental change in the way we nominate our presidents,” Don Fowler, the “national chairman” of the DNC from 1995 to 1997 and an opponent of the reforms, said on Saturday. But if the Sanders wing has its way, it will only be the first step toward making the Democratic Party more inclusive, democratic and engaged with its grassroots base.