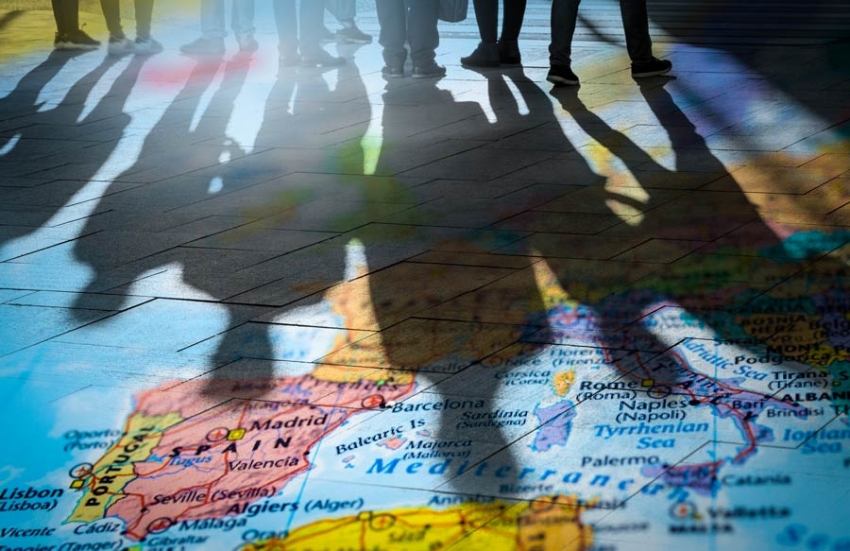 The far Right has a way of ghoulishly pantomiming the underlying dynamics of whiteness otherwise concealed by macro political machinations and diplomatic respectability. (Andrea Zangrill/Savvapanf/Shutterstock)

Europe used to serve as a utopian vision for the Left and a punching bag for the Right. Now it’s reversing.

A shared far-right identity is closely bound to a shared sense of loss, and the drive to recover those losses fuels reactionary politics.

Two years and a hundred political lifetimes ago, a U.K. prime minister offered a spurious referendum on EU membership to quell backbenchers and far-righters causing trouble in the ranks. It was a disastrous game of electoral Russian roulette.

A deceptively simple choice—“in or out”—fractured U.K. political culture into unlikely alliances. Pro-remain leftists (from reluctant to distinctly Europhile) found themselves allying with global conglomerates like Goldman Sachs. Older generations of socialists and alter-globalists skeptical of EU membership found themselves aligned with reactionary race-baiters like Nigel Farage and Boris Johnson. It got nasty. A pro-remain Labour member of Parliament, Jo Cox, was slaughtered by a far-right terrorist, a man who went on to declare his motivations in court as “death to traitors, freedom for Britain.”

That a man hepped up on violent extremism could consider Brexit a prospect worth killing over—a life-or-death situation for post-imperial pride—means we were not just talking about the EU or the lofty technocratic maneuverings of its many overlapping institutions, but about fidelity to an idea of Europe, one that serves as a placeholder for competing utopian ambitions.

We can fish around endlessly for a definitive idea of what Europe is and still come up empty-handed—and little wonder. It’s a continent, a collection of uncertain allegiances and shifting borders. It’s a conglomeration of institutions inside and outside the EU, a trading bloc, an immovable geographic fact and a fragile “peace project.” The idea of Europe is up for grabs.

For some on the Left, Europe represents a progressive vision of the future: socially democratic, internationalist, pro-worker and, in some small way, pro-migration. When arguing for greater concessions on social welfare and infrastructure, figures like Bernie Sanders and Alexandria Ocasio-Cortez urge Americans to look to the manifold possibilities of the Old World.

But even the most passionate left Remainers would still agree that the utopian Europe does not, in fact, exist. When the U.S. social welfare system has been brought to its knees by years of neoliberalism, Northern Europe’s generous healthcare and benefit programs are easily romanticized. But to be blinded by romance is to forget the painful realities: Austerity programs have gripped the continent ever since the economic crash, hollowing out those vaunted welfare programs. The Troika of the European Commission, the European Central Bank and  the International Monetary Fund has locked southern European states into default debt-bondage, pouring cold water on hopes of left electoral projects like Syriza. The liberal institutions of the EU have utterly failed to check the rising far Right—indeed, they’ve overseen a regime of brutal anti-migrant border securitization.

Centrists can get misty-eyed about the Europe of coffee-shop poets and frilly-shirted revolutionaries, untroubled by the sharper contradictions in the European project. But for the Left, saying yes to “Europeanness” can mean excusing or ignoring the cruelties of right-wing Europe. One can, of course, argue the pragmatic case for EU membership; the lofty bureaucrats of the EU are more sympathetic enemies than the homegrown reactionaries of the Tory party. But this doesn’t advance a positive Europeanness.

These difficulties have revived critiques levied at the EU by the British Left when membership was first up for debate in the 1970s: First, that it was essentially a neoliberal project designed to ease the flow of capital across borders. Second, perhaps more fundamentally, that Europeanness itself is an identity that excludes Black and Brown people. That first critique means that any positive Left European identity has a hard job to do, founding a Europe that goes beyond its neoliberal origins. The second is somewhat more troubling, implying that a socialist, promigrant, anti-racist project of Europeanness is flawed from the word go.

Where the Left struggles to comfortably occupy a European identity, the Right has moved in. Pundits and politicians on the extreme Right once villainized Europe as the mainstay of the elitism and metropolitanism they loved to loathe; now more are organizing under the flag of Europeanness as a stand-in for global white nationalism. It provides what Jean-Yves Camus and Nicolas Lebourg term a “common sense of mission,” something to gum together a formerly scattered and sclerotic international network. Far-right leaders across Europe, North America and Australia are abandoning their traditional nationalism to broaden their power; their networks of media platforms, organizing communities and political influence stretch across the world. Steve Bannon’s recent European tour to announce a pan-continental far-right campaign to storm the 2019 EU elections is only the latest—and perhaps the most monied—episode in this ongoing trend.

Where out-and-out talk of white supremacy is (for now) still frowned upon, Europeanness provides a useful dog-whistle tactic to bind together countries with few other tangible commonalities. It is that thing which Poland, Greece and Canada supposedly have in common: an ineffable Europeanness made up of such incorruptibles as “freedom” and “liberal democracy” and “Western values.” They’re far from the inventors of this line of thinking. It traces the line from the Crusades to the “civilizing mission” of the colonial age to Jean-François Thiriart’s post-war dreams of a pan-European white ethno-state to even George W. Bush’s war on terror. Today, this thinking gets a veneer of respectability in universities across the world, from Samuel Huntington’s Clash of Civilizations to Phillipe Nemo’s Qu’est-ce que l’Ociddent?, which explains the continued economic dominance of the Global North by dint of its superior cultural background and innovative economics. Nemo tries desperately not to talk about race.

This “cultural background” is an identity crafted to be so vague it’s difficult to refute, but specific enough to exclude who it needs to. Migrants, Black people, Muslims and Jews are all portrayed as stalwart villains shaking their swords at the gates of Europe. Add Roma people if you’re in Eastern Europe, Southeast Asians if you’re in Australia and Latinos if you’re of a more Trumpian persuasion.

The scapegoat shapeshifts, but the point remains the same. Far-right ideology depends on spinning the idea of a mythic golden age from which we’ve fallen, sold out by decadent elites in cahoots with Communists and migrants. A shared far-right identity is closely bound to a shared sense of loss, and the drive to recover those losses fuels the terrifying machinery of reactionary politics. The story is intoxicating. White supremacists throughout the world playact symbolic loyalty to prelapsarian Europe: The Crusades, the Renaissance, the Enlightenment and the Imperial Age all blend together in one romantic morass. Racism that focuses on cultural rather than phenotypical signifiers is no less vicious. This dog whistle is, of course, a foghorn, a clarion call to white resentment with only a slight patina of plausible deniability.

This logic holds the contradictions of the far Right in check. It allows Nigel Farage to tub thump about the brave British Tommies of D-Day whilst breaking bread with the German AFD party, with its links to actual neo-Nazis; sure, we fought in the past, but a shared Europeanness predates those skirmishes. It is what allows farrighters across the world to condemn the elites of the EU and push for Brexit, whilst remaining loyal to an ideal of “European civilization.” Merkel and Macron, in their eyes, have “betrayed” the idea of Europe through an apparently insufficient cruelty to migrants and Muslims. (Though some of Europe’s border policies should be enough to make Trump loyalists salivate with envy.)

Perhaps we should not be surprised that “Europe” provides such a useful vehicle for the ghastly utopian visions of the white supremacist far Right. Whiteness as a social and political category deems a certain section of the population inherently more deserving of money, power and resources— and therefore comes in handy to justify policies that strip money, power and resources from “lesser” populations. This whiteness has long been integral to European-based nations justifying their extraction of resources and their forcing people into subjugation or slavery. In 1884, the Berlin Conference brought European leaders together to carve up Africa into banqueting halls on which various nations could gorge. That was a project of whiteness—an unsteady international accord to secure the power of a certain class of people. In our post-colonial era, white political and economic ascendency inscribes itself on the world via pan-European and supra-national institutions, from trade deals to military alliances. The far Right has a way of ghoulishly pantomiming the underlying dynamics of whiteness otherwise concealed by macro political machinations and diplomatic respectability. And so, Steve Bannon’s European Dream is born.

Economic disarray, the dashed hopes of Spinelli-style Europhiliacs and the increasing ambition of the far Right haven’t created the tensions around Europeanness; they have thrown them into sharp relief. Those determined to secure some kind of progressive future for the continent, to forestall fascist creep, must ask ourselves what radical internationalism is possible within the framework of Europeanness. Can we imagine a community of Europe unanchored from its dubious origins and neoliberal present? How can we call ourselves European whilst grappling with its grim history of racism and exclusion? What, if anything, can be salvaged from the wreckage?

Eleanor Penny is a writer, poet and essayist based in London. She is a senior editor at Novara Media and the online editor of Red Pepper magazine.