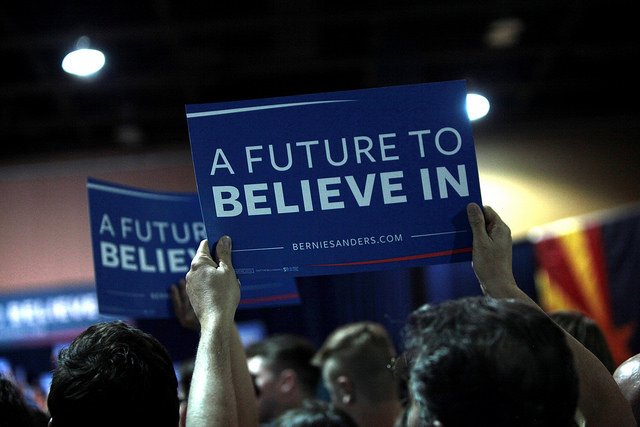 The Left must be open to candidates other than Bernie Sanders for the 2020 presidential election. (Gage Skidmore/Flickr)

For other perspectives on this debate, read Peter Frase and Brihana Gray

Bernie Sanders stands out among potential 2020 candidates as having the strongest and longest-standing commitment to left principles. But the question at hand is strategy. Should leftist organizations immediately endorse Sanders and begin preparing to campaign for him? The answer is no. There are strategic benefits to waiting.

All politicians are fundamentally actors bound in a complex decision matrix of power and influence. Our first priority should be to change the matrix rather than pick our favorite actors.

For one, there are reasons to believe that endorsements don’t create meaningful accountability. Look to the Working Families Party (WFP). In both 2010 and 2014, the WFP provided Connecticut Gov. Dannel Malloy the margin he needed to win, but Malloy did not govern as a progressive. In fact, he chose not to seek re-election this year because his relationship with progressives is so bad. In 2003, New York City Council candidate Letitia James became the first candidate to win a nomination on a WFP line. But in her current run for attorney general, she aligned closely with Gov. Andrew Cuomo and announced she would not seek the WFP line.

To be clear, it is unlikely Sanders would abandon his left ideals. But there are still issues where the Left is pulling him along, such as abolishing ICE— where he has moved—and sex workers’ rights, where he is still behind. Endorsing early would not help push him, and would make it less likely that other candidates attempt to court the left vote.

A strategy based around the power and visibility of particular candidates is dangerous for other reasons. The domestic abuse allegations surrounding Rep. Keith Ellison make clear the need for a broad bench.

The Left’s goal should be two-fold: Gain the same access to candidates that corporate America now has, and create an influential ideological project on the scale of the Koch Brothers’.

The Kochs have data capacity, build pipelines for candidates and staffers, and generate extensive policy information and polling data—all of which the Left can replicate. It does no good to have 30 progressive endorsees win if they’re still relying on the same consultants, staffers and policy briefs as every other Democratic politician.

The Progressive Talent Pipeline, which connects progressives to legislative positions in Washington, D.C., is a positive example of building policy capacity. Think tanks like People’s Policy Project and Data for Progress (which I co-founded) provide information that changes policy and strategic calculations. In addition, the Left needs to build up capacities for block-and-tackle politics: running NGP VAN software, fielding polls, shooting ads, buying ad time. We need talking points, one-pagers and think tanks that generate influence whether our candidates win or lose. For the time being, those capacities should be available to as broad a group of Democrats as possible to encourage all candidates to lend us their ears.

We also need litmus tests to power primary challenges. Abolish ICE proved to be a flashpoint for Alexandria Ocasio-Cortez’s campaign. In Illinois’s Third Congressional District, abortion could be that spark against pro-life Democrat Dan Lipinski. Power comes from setting these standards and forcing candidates to meet them, which is actively undermined by endorsing early.

The success of left ideas attests to the reality that Medicare for All, abolishing ICE and other goals have weight. If the left lane is open, candidates beyond Sanders will vie for it. The Left must be positioned to wield influence.