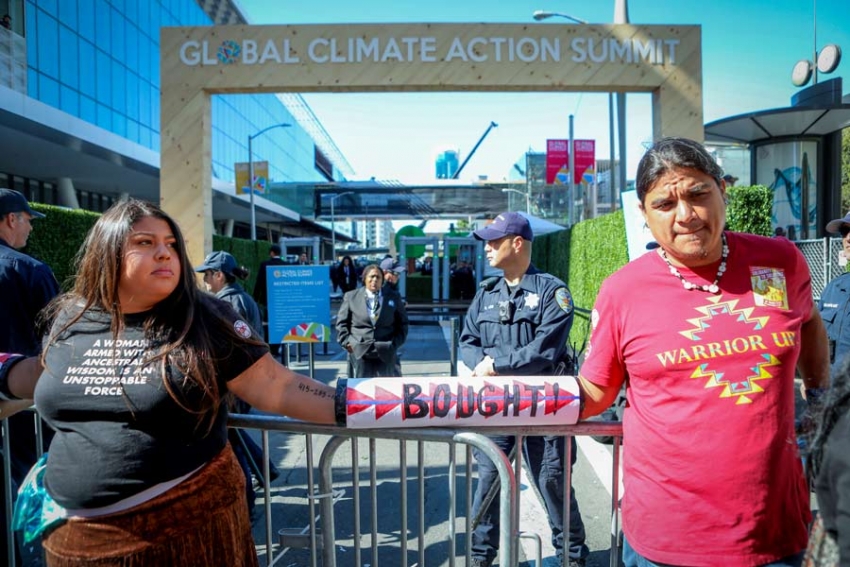 While the elite discuss band-aids, organizers call for real solutions.

Cut off emissions at their source—such as drill sites and refineries—and democratize the energy system.

SAN FRANCISCO—In the early morning on September 13, a few hundred demonstrators blocked an entrance to the massive conference center where the Global Climate Action Summit (GCAS) was getting underway. Within this crowd of protesters, pulsing with music and speeches, a small handful of people locked their arms together in pipes; some encased them in empty oil barrels. The message to outgoing California Gov. Jerry Brown—the host of the summit, eager to cement his legacy as a climate champion—was clear: Approving over 20,000 permits for new oil and gas wells is no way to be a climate champion.

GCAS was intended as a place for state and local governments and corporations to showcase their climate commitments. The youth, indigenous, and climate and environmental justice groups gathered that morning were largely excluded from official programming. So, they created their own.

Flanking the summit were massive, raucous demonstrations and counter-events, drawing attention to the local impacts of corporate polluters and promoting alternatives. A short train ride away from GCAS, after all, lie a string of refineries and the people who live in neighboring communities are well acquainted with their effects.

“I see Chevron from my house every single day,” says Pennie Opal Plant, a co-founder of Idle No More SF Bay. “We suffer from chronic sinus infections and throat problems. I’m really worried about my grandson getting asthma.” Asthma rates near her home are well above the national average. “Jerry Brown is getting ready to leap off into the world stage as a self-proclaimed climate hero, while he has allowed 17 percent more offshore drilling.”

Events kicked off the Saturday before the Summit, with the 30,000-strong Rise for Climate Jobs and Justice march. Led by indigenous and Bay Area environmental justice groups, some creative marchers farther back affixed a papier-mâché likeness of Brown’s head to a mock oil derrick. Splayed out in tents around historic La Raza Park a few days later, presenters from around the Bay and the world shared strategies to build workable climate solutions like sustainable, affordable housing and community-owned solar arrays. The dance troupe Xiuhcoatl Danza Azteca performed a closing prayer and dance to cap off the day’s events—a far cry from GCAS’s keynotes, cocktail hours and catered lunches.

Dawn Phillips is a longtime organizer based in the East Bay and the executive director of the Right to the City Alliance, a national network that works at the intersection of housing and climate justice in rapidly gentrifying real estate markets. He spoke with In These Times as the September 13 blockade was winding down, the center buzzing with delegates and a considerable number of police. Phillips and a few other movement leaders had gotten credentials to be inside.

“What’s happening inside GCAS versus what’s happening outside is a very dramatic juxtaposition of values, of vision and of resourcing,” Phillips says. “Inside GCAS … you can just see how much money has been spent in creating this sterile, militarized environment where there are almost as many security and law enforcement representatives as there are delegates.”

“It’s a trade show of false solutions,” he adds. As he and other organizers explained at various events throughout the week, the real solutions—unlike the market-based measures, such as carbon trading, that dominated the summit agenda—are simple: Cut off emissions at their source—such as drill sites and refineries—and democratize the energy system.

About an hour after we speak, Phillips and fellow organizers put their credentials to work, shouting down the opening keynote from billionaire former New York City Mayor (and rumored 2020 Democratic presidential candidate) Michael Bloomberg. It was one of the rare moments when the outside summit leaked into the official one.