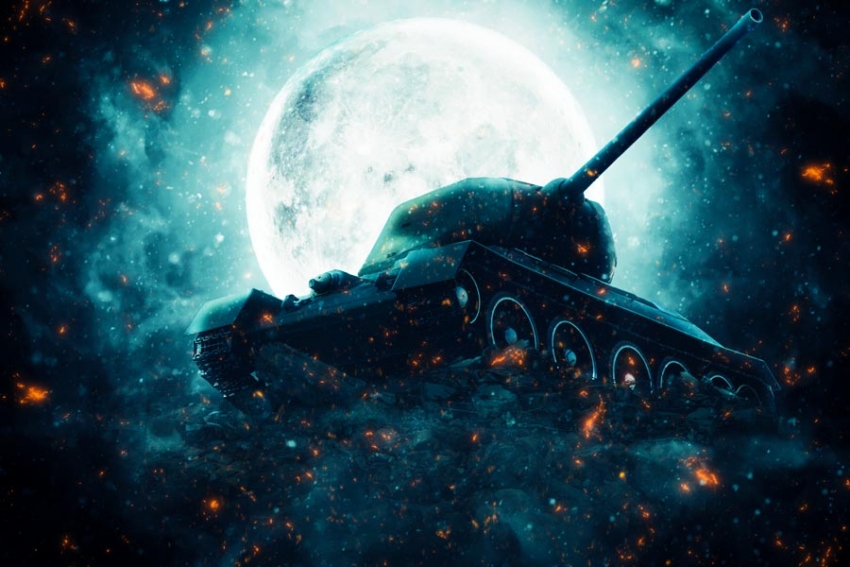 While the United States already has a space force in operation since 1982, President Donald Trump's proposes the formation of an entirely new military branch devoted to space.

China, Russia, and the U.S. are already militarizing space. Here’s why that’s dangerous.

Update: On Dec. 11, 2019, the Democratic-controlled House passed a $738 billion defense bill that included the creation of Trump's long-sought Space Force.

In the rush to heap scorn upon the Trump administration, the president’s critics sometimes miss the forest for the trees. Such was the case in June when Donald Trump announced the creation of the socalled Space Force, a sixth branch of the U.S. military.

Critics mocked the idea as “ridiculous,” “stupid” and part of an “imaginary space war.” “There’s no threat in space! Who are we fighting?” asked Stephen Colbert. Vox wondered if the Space Force would carry lightsabers.

It was easy to miss that the idea is not uniquely Trumpian—and poses a real threat. For all intents and purposes, a space force already exists in the form of the Air Force Space Command (AFSPC), a 36,000-person division of the Air Force that’s been operating since 1982.

Where Trump’s proposal differs is that it forms an entirely new military branch devoted to space, something James Clay Moltz, associate professor at the Naval Postgraduate School and author of The Politics of Space, says is “largely unprecedented.”

According to Vice President Mike Pence, the Space Force would include a new centralized command structure for space operations that would take over satellite-based military tasks such as surveillance and navigation for ground troops, as well as monitoring and tracking missile launches, all currently performed by the AFSPC. It’ll also take charge of any offensive capabilities developed for space, such as anti-satellite weapons (ASATs), introduce an “elite group of joint war-fighters” to support the rest of the armed forces, and oversee a new agency dedicated to developing “cutting-edge warfighting capabilities” for space.

The proposal is viewed by the space-savvy in the military as “either unwise, unnecessary or premature,” Moltz says—and almost certainly expensive. It’s on the basis of its potential wastefulness and redundancy that critics such as Defense Secretary James Mattis, ex-astronauts Mark and Scott Kelly, Air Force secretary Heather Wilson and other members of the military have assailed the idea.

But there’s a much bigger debate to be had. International conflict in space is no longer a plotline ripped from a sci-fi paperback. A space war is becoming more and more likely.

THE GEOPOLITICS OF SPACE

U.S. military dominance in space is really about maintaining military dominance back on Earth. Space infrastructure, particularly satellites, is key to the U.S. military’s global reach, servicing everything from navigation to weapons targeting to communications. A 2018 report from the Center for Strategic and International Studies (CSIS) trumpets: “Space capabilities enable the American way of warfare.”

The global space arms race began with the Cold War, when both the United States and the USSR began testing ground-based anti-satellite (ASAT) weapons. Reagan’s Air Force became the first to test one on a spacecraft, destroying an old observation satellite in 1985. (Reagan also, infamously, attempted to put in place the so-called “Star Wars” program, which would have used spacebased lasers to shoot down incoming Soviet nuclear warheads.)

The 1990 Gulf War—known now as the first “space war”—made U.S. empire and satellites inseparable. With 24-hour satellite support, U.S. forces could not only communicate across broad channels, but map out terrain, observe and predict enemy actions, and use new guided, “smart” weapons that were, in theory, less indiscriminate. Satellites make today’s drone warfare possible.

While the United States and Russia have adhered to what Laura Grego, senior scientist in the Global Security Program of the Union of Concerned Scientists, calls an “unofficial moratorium” on stationing dedicated weapons in space (as opposed to ground-based systems that target spacecraft), the United States—and, increasingly, its rivals—continue to invest in other forms of space militarization.

The United States leads the way in satellite capacity and space military technology, and has opposed past demilitarization efforts. In 2006, the George W. Bush administration blocked a UN resolution on arms control in space, issuing a National Space Policy that pledged to resist “new legal regimes or other restrictions,” including arms control agreements, on U.S. use of space. In response to this and other steps by the United States, other countries have moved to shore up their own space capabilities.

China tested an ASAT in 2007, and both it and Russia have increasingly invested in counter-space capabilities, such as ASAT technology and jamming GPS receivers. China and Russia’s advances left Washington spooked. In 2014, the Pentagon invested an extra $2 billion into classified offensive space programs. In 2015, the “emerging threats” of Russia and China were used to justify a $3 billion add-on for national security space capabilities, as officials openly talked about fighting a war in space.

We’re still a long way, however, from ray guns and X-wing dogfights. While in-orbit ASAT weapons exist, for the time being any space conflict would be fought from the Earth. For example, all three countries have capacity to disrupt enemy satellites by jamming them with their own, or to hack into a satellite’s ground operation.

But increased reliance on satellites for warfare— not to mention everyday life—opens up “a critical vulnerability,” warns the CSIS. Space infrastructure is fragile, vulnerable to hacking and able to be brought down by other spacecraft intentionally ramming into it, by ground-based ASAT missiles or even by loose pieces of debris.

Because space is unfamiliar terrain, nations don’t know how to interpret others’ behavior. According to Cassandra Steer, an independent consultant on space security and former executive director of the McGill University Centre for Research on Air and Space Law, when the United States and its allies have run war games centered on space, they can quickly escalate to nuclear war.

“If one major power thinks the other is about to take out its satellites, it could take reciprocal action, or even launch a conventional or nuclear attack,” says William Hartung, director of the Arms and Security Project at the Center for International Policy.

And as space becomes increasingly cluttered with spacecraft, the chance of accidental calamity increases. Pentagon officials warn that space is becoming increasingly crowded. The U.S. alone operates 859 government and commercial satellites, nearly one in five of which are military.

For the first time, two satellites collided in February 2009, producing a “debris cloud” that added to the approximately 500,000 pieces of debris currently in orbit, threatening to tear through spacecraft and add yet more debris to this total. The destruction of spacecraft by ASAT tests, too, adds to the debris.

The more debris in orbit, the greater the threat to the nonmilitary use of space that makes modern life possible. Traffic lights, banking systems, telephones, the internet, plane travel—all rely on satellites whose destruction could suddenly leave us in the dark.

“If we have no information and we’re in a blackout, people hit the panic button,” Steer says. “And that may mean an actual weapons button.”

Given these dangers, many diplomats and activists are pushing to declare space a weapon-free global commons. But there’s been little movement on any legally binding agreement. Although “weapons of mass destruction” have been banned in space since the 1967 Outer Space Treaty, international regulation is sparse.

In 2008, Russia and China put forward a draft treaty on the Prevention of the Placement of Weapons in Outer Space (PPWT), which lacked a specific verification regime and included a carve-out for the kind of ground-based ASAT weapons both countries had been testing. Still, flawed as it was, Project Ploughshares called the PPWT “undoubtedly the most substantive effort thus far” to make weapon-free space a matter of international law. The United States, however, said it couldn’t support such a “fundamentally flawed” proposal.

Many analysts say a treaty is unlikely in the near future, and look to other avenues of demilitarization.

A more realistic solution, Steer says, is non-binding instruments like guidelines that regulate conduct in space, which can work due to political buy-in and reciprocity. These norms might include, for example, best practices on approaching another country’s spacecraft.

The United States could be amenable to such agreements. John Hyten, commander of the U.S. Strategic Command and a proponent of the Space Force, has urged the creation of “international norms of behavior in space.”

“Very few military off icers are enthusiastic about weaponizing space,” James Moltz says. “That said, many in the military are skeptical that war and weapons can be kept from space forever.”

The deeply vested interests involved—interests that have the ear of U.S. politicians—also make it difficult to roll back or halt the militarization of space.

The National Space Council, a group of cabinet members who shape U.S. space policy, has a “users’ advisory group” whose members include the CEOs of Lockheed Martin, Boeing, Northrop Grumman and other corporations.

The Symposium, now in its 34th year, embodies the close ties between industry and government on space policy. Co-sponsored by the AIA and its defense contractor members, the Symposium provides an opportunity for industry to network with representatives of think tanks and educational institutions, foreign leaders, and military, national security and other government officials.

This year’s event in April saw speeches from Vice President Mike Pence, Commerce Secretary Wilbur Ross, U.S. senators and Air Force officials. The current AFSPC commander, Lee Levy, declared that plans for warfighting in space were no longer simply a discussion, and that the U.S. military needed to “gain and maintain space superiority.”

Industry influence extends to the politicians who advocate further space militarization. Rep. Mike Rogers (R-Ala.), reportedly instrumental in selling Trump on the Space Force, has received hundreds of thousands of dollars from the defense industry. Reps. Doug Lamborn (R-Colo.) and Adam Schiff (D-Calif.), both big boosters of a more aggressive space policy, represent districts populated by the defense industry and have raked in similarly large donations.

The Space Force contributes to this build-up, further entrenching militarization and feeding money to defense contractors. “President Trump’s enthusiasm for the Space Force,” Hartung says, “creates a danger that existing norms, like keeping weapons out of space, are more likely to be set aside.” He says the resulting space arms race “could spark a general war.”

Yet before efforts to rein in weaponization can gain momentum, public awareness must be raised, a task made harder by widespread media derision of Trump’s Space Force proposal. Conflict in space is a clear and present danger. We need to take it seriously.