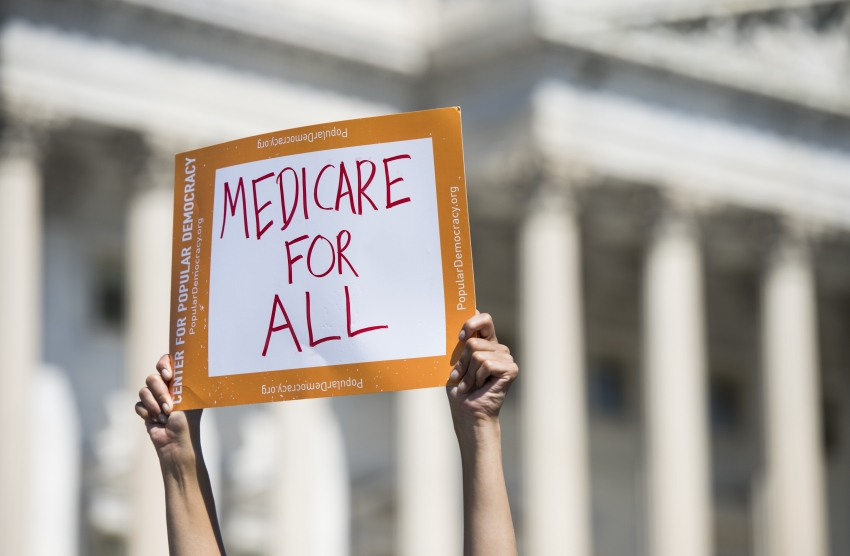 Democrats were elected on promises of affordable healthcare. This is what states can do even under Trump.

Democrats just got an electoral mandate to deliver cheaper, higher-quality healthcare. They have to use it, and here’s how.

No single issue powered Democrats to midterm victories more than healthcare. Republicans were roundly condemned for threatening a return to the pre-Obamacare denial of coverage for pre-existing conditions. Expansion of Medicaid passed in three deep-red states (Idaho, Nebraska and Utah). Dozens of Democrats endorsed plans like Medicare for All, and won.

With a Republican president and Senate, the forecast for meaningful healthcare changes at the federal level before 2021 remains bleak, but 14 states now have a Democratic “trifecta”: control of both chambers of the legislature and the governorship. Those states can build the model for a universal, humane healthcare system, right?

Hang on. State-based single-payer would require a waiver to utilize federal Medicare and Medicaid dollars and Obamacare subsidies. And Donald Trump isn’t the likeliest president to grant such a waiver.

But that should not dampen hopes for state-level improvements in healthcare. In fact, by cutting costs and increasing access, blue states can pave the way for a smoother rollout of single-payer nationwide after 2020, should we be so lucky.

Single-payer merely means that the government would take over the health insurance market. In theory that’s great, as government can use the large pool of patients to bargain down the cost of healthcare. But private companies would still deliver treatment and medications. And those companies have aggressively concentrated, building near-monopolistic bargaining power.

As Phillip Longman of the Open Markets Institute has pointed out, in over 40 percent of the country, a single entity controls all local hospitals. Pharmaceutical companies have also consolidated, and the supply chain for prescription drugs is dominated by a handful of middlemen. In the most recent quarterly earnings reports, just 10 healthcare companies earned half the industry’s profits, nine of them drug makers.

This has had dramatic consequences for cost and access. Hospitals that dominate regions and drug companies with a monopoly on particular medications can simply raise prices on patients with impunity. And as unprofitable providers shut down, particularly in rural areas, people cannot get the treatment they need.

States can fight this monopolization of healthcare; in fact, it’s essential that they do. Even a government single payer would have difficulty dictating terms to a hospital network monopoly that controls a large metro area. There simply wouldn’t be an alternative. That’s to say nothing of the political muscle large healthcare providers can leverage.

But Democrats just got an electoral mandate to deliver cheaper, higher-quality healthcare. They have to use it, and here’s how.

States can reject health system mergers and promote more competition. California, for example, recently passed a law enabling the Department of Managed Health Care to deny mergers with an adverse impact on patients.

States can also lower prescription drug prices. They could resurrect an unsuccessful 2016 initiative in California, which would have reduced the price for all drugs purchased by the state—through Medicaid or public employee health plans—to the level paid by the VA. They also could emulate Vermont’s law allowing wholesale importation of safe, cheap prescription drugs from Canada.

Pharmacy benefit managers (PBMs), the unheralded thirdparty administrators that negotiate drug prices for health plans, have been criticized for skimming billions off the top when they negotiate rebates. Increasing transparency and making PBMs a fiduciary that must act in the best interest of their clients can drive down costs; California adopted that this year.

There are even options to leverage insurance markets. Covered California, the state exchange, recently instituted a program that rewards or penalizes hospitals and physicians based on quality of care. That could begin to move giant providers away from predatory practices that hurt patients. States that control their own exchanges could create their own standards. And Democratic trifecta states like Maine and New Jersey, which use HealthCare.gov, could build their own state exchanges, insulating them from Donald Trump’s attempts to weaken the law.

In Maine and Kansas, GOP governors were the last obstacles to expanding Medicaid under Obamacare; the incoming Democrats will likely get that done. Governors there, along with new Democrats in Michigan and Wisconsin, could also reverse the implementation of Medicaid work requirements, which are designed to restrict access. And more than a dozen state legislatures have explored a “Medicaid buy-in” concept, where residents who cannot afford private health insurance would be able to purchase a low-cost, state-run public option based on Medicaid rates. (Call it “Medicaid for All.”)

These are just some solutions available. None of them would cost much to implement—in fact, they’d save states and patients money by constraining outsized provider profits. More important, it puts the country in a better position to enact single-payer plans that have a chance of actually working.

It will take substantial political will to take on entrenched special interests like hospitals and drug companies. But we saw Republicans win elections in numerous states in 2010 and stop at nothing to implement their policies. Democrats need to be just as bold.