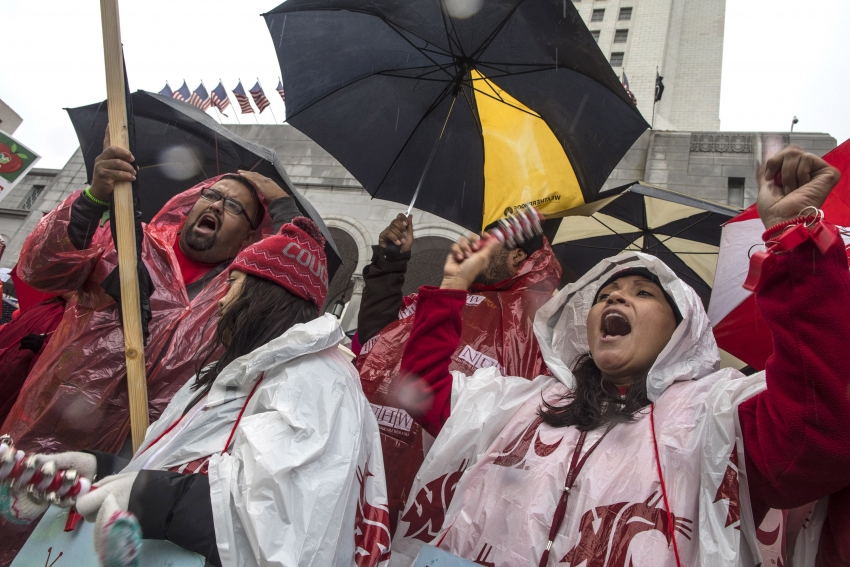 Because there’s so much at stake, the battle doesn’t really end with the strike. (Barbara Davidson/Getty Images)

Over 30,000 Los Angeles teachers are out on a historic strike to beat back austerity and pro-charter school forces.

Many of the striking teachers see the battle in Los Angeles as a front-line action to put an end to starvation of public school funding on one end, and corporate-fueled privatization on the other.

LOS ANGELES— “Welcome to the revolution.” This was the message from Link Mize, a history and government teacher at the NOW Academy in the heart of Koreatown, as he handed out signs to picketing teachers on Monday, the opening day of United Teachers Los Angeles’ (UTLA) first citywide strike in 30 years. Mize and dozens of his fellow NOW Academy teachers braved rain to show their support, the latest in a wave of “Red for Ed” strikes that spread across many conservative-leaning states last year.

But here in the nation’s second-largest school district, where an incredible 98 percent of UTLA voting members voted to authorize a strike last August, the issues are not limited to wages and benefits, as they were in West Virginia, Arizona and Oklahoma. “I feel like this is part of the war to keep public education public,” said Mize, a UTLA chapter chair at the NOW Academy, which is built on the former site of the Ambassador Hotel, where Robert Kennedy was assassinated in 1968.

Many of the striking teachers see the battle in Los Angeles as a front-line action to put an end to starvation of public school funding on one end, and corporate-fueled privatization on the other. And while that debate has been playing out in Los Angeles and across the country for years, union leaders and teachers believe this could be a last stand. “If this doesn’t work there may not be a union left,” said Mize.

Because there’s so much at stake, the battle doesn’t really end with the strike. It’s also tied up with a quietly radical proposal looming from school superintendent and former investment banker Austin Beutner, which would divide the Los Angeles Unified School District (LAUSD) into 32 “networks.” Critics call the plan a blueprint to close neighborhood schools, pour money into charters and decentralize opposition to privatization. Beutner has even brought in a consultant, Cami Anderson, who tested this model while superintendent of schools in Newark, New Jersey.

Plus, an upcoming school board special election will decide the balance of power between charter supporters and those backed by UTLA, and whether the network model has majority support to go forward. You cannot disaggregate the strike from these other issues. Union leaders see LAUSD as under attack, and are using all means at their disposal to stem the tide.

UTLA, which has been working without a contract since June 2017, does want to improve conditions for teachers. They’re seeking a 6.5 percent raise in the first year of a three-year contract; the district has offered 6 percent spread over two years. UTLA also wants the district’s $1.8 billion reserve to be used to reduce class sizes and hire nurses, librarians, psychologists, and counselors, which are in short supply in public schools.

“I started in 1993, when I came in the class size was 45, and when I left it was 45,” said Marcy Winograd, a former Congressional candidate and retired teacher who taught English and special education. Winograd cited UTLA statistics that 80 percent of schools in the system don’t have full-time nurses, that counselors have caseloads as high as 500 students, and that librarians are frequently itinerant laborers driving between schools.

LAUSD has said these staffing and wage enhancements would wipe out the budget reserve and create a deficit. “The district is not committed to lowering class sizes, they’ve only promised it for the first year,” Winograd said. “They have to bring more money to the table. What’s more important than our students and our future?”

But the financial matters are almost a sidelight to UTLA’s other demands. Teachers have asked for cutbacks to standardized testing. They want more say in decision-making for the schools. They want district-owned real estate to be used to provide affordable housing.

The UTLA vision is holistic, envisioning not only schools based on analysis rather than rote memorization and democracy rather than dictatorship, but centralizing the role of the school in community development and progress. So far, according to the union, LAUSD has not even addressed these proposals.

UTLA claims the school board has a different vision, informed by the billionaire donors who spent $9.7 million in 2017 to flip two seats and gain a majority for charter proponents on the school board. About 20 percent of Los Angeles K-12 schools are charters, which the district funds to the tune of $600 million a year.

Beutner, who had no experience in education before being hired last May, was the charter backers’ handpicked choice. “There is no trust in this superintendent,” said Monica Studer, a testing coordinator for English-language learners who also struck during the last UTLA action in 1989. “His goals are to privatize education.”

The blueprint for splitting up LAUSD into networks, which has been the subject of community meetings, would seem to fit within that mission. This “portfolio model” would allow local managers to close neighborhood schools and turn them into for-profit charters, without any central oversight. That’s what happened in Newark, under the same superintendent, Anderson, who is consulting with the district. New Orleans and Detroit have also tried the portfolio model.

The breakup of LAUSD would require board approval, and that’s where the open seat comes in. Ref Rodriguez, the former board president, left office after being indicted in a scheme where he faked grassroots support by paying for straw donations. Rodriguez could have just self-funded his race legally, but he wanted to show he had local supporters, by buying them.

On March 5, voters in Rodriguez’ district will vote for a replacement, and with charter and teachers union supporters on the board deadlocked at 3-3, the winner of the race could determine LAUSD’s future. Union leaders coaxed the legendary former school board member and state legislator Jackie Goldberg to run for her old seat. There are several pro-charter opponents, and the California Charter Schools Association decided not to endorse in the first round. If nobody gets 50 percent, the race goes to a top-two runoff, where presumably Goldberg and a charter advocate will face off in a consequential matchup.

The strike is taking place as a backdrop to these machinations. Some teachers believe that the pressures on local political leaders could push toward a settlement. L.A. Mayor Eric Garcetti thinks he wants to run for president, and California Governor Gavin Newsom just started his first term a week ago. Neither wants to deal with a massive education strike on their watch.

In fact, Newsom’s first budget, which would provide more money to K-12 education, led the district to up its offer to UTLA last Friday, guaranteeing full-time nurses at every elementary school, librarians at every secondary school and modestly lower class sizes. But the district’s offers were limited to one year, with the possibility for retrenchment afterward.

Both sides appear to be dug in. The district has hired 400 highly-paid scabs, including some union members who are substitute teachers, to essentially babysit students in giant assembly halls. “A normal substitute can make $190 a day,” said Nicholas Harris, a substitute in the district who was walking picket lines on Monday, but she noted that during the strike the district was offering up to $385 a day. “If they have that kind of money why aren’t they funding the schools? Because they want to break the union.”

With 85 percent of LAUSD students living near or below the poverty line, keeping kids off the streets and in the classroom during the strike is worthwhile, but it also eases the pressure on management that often can lead to a deal. Many parents weren’t taking advantage of the offer Monday, with drop-offs just a slow trickle at the NOW Academy. “I think the students understand and support us,” said Patricia Andrade, a third and fourth-grade teacher at the NOW Academy. “Our students are smarter than we think.”

The public has already shown support for striking teachers. For example, the Los Angeles chapter of the Democratic Socialists of America helped raise over $10,000 to send taco trucks to picket lines all week; at the NOW Academy, teachers had breakfast burritos with eggs and chorizo made to order. And a solidarity march of over 50,000 people took over downtown L.A. in mid-December.

The march pointedly concluded in front of the Broad Museum, an art complex constructed by billionaire developer Eli Broad, one of the most generous donors to the charter school movement. That UTLA recently called for a moratorium on charters puts the entire battle between the union and the district into relief—this is about stopping the privatization machine cold.

“The billionaires want to bankrupt the district and slice and dice and privatize,” said Winograd. “We don’t want to see the demise of public education.”