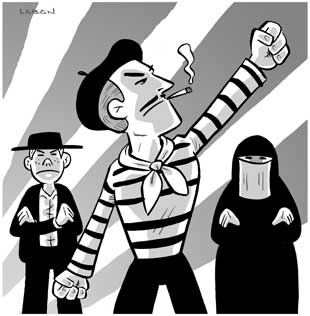 Thanks, But Well Do It Ourselves

Amish communities routinely practice the institution of rumspringa (from the German herumspringen, to jump around). At 17, their children (who until then have been subjected to strict family discipline) are set free and allowed, solicited even, to go out and experience the ways of the “American” world around them. They drive cars, listen to pop music, watch TV and get involved in drinking, drugs and wild sex. After a couple of years, they are expected to decide: Will they become members of the Amish community, or leave it and turn into ordinary American citizens? Far from allowing the youngsters a truly free choice–that is, giving them a chance to decide based on the full knowledge and experience of both sides of the choice–such a solution is a fake choice if there ever was one. After long years of discipline and fantasizing about the illicit pleasures of the outside world, when the adolescent Amish are thrown into this world unprepared, they cannot but indulge in extremely transgressive behavior, gorging themselves fully on a life of sex, drugs and drinking. And since they have never had the chance to develop any self-regulation in such a life, the wholly new and permissive situation inexorably backlashes, generating unbearable anxiety. Thus, it is a safe bet that, after a couple of years, they will return to the seclusion of their community. Indeed, 90 percent of the children do exactly that.

This is a perfect example of the difficulties that accompany the idea of a “free choice.” While Amish adolescents are formally given a free choice, the conditions they find themselves in while choosing make the choice “unfree.” In order for them to have a truly free choice, they would have to be properly informed of and educated about all their options. However, the only way to do this would be to extract them from the Amish community, which would effectively render them American.

This deadlock also illustrates the problems with the standard liberal attitude toward Muslim women who wear veils: They can do it if it is their free choice and not an option imposed on them by their husbands or family. However, the moment women wear a veil as the result of their free choice (say, in order to realize their own spirituality), the meaning of wearing a veil changes completely. For liberals, it is no longer a sign of their belonging to the Muslim community, but an expression of their idiosyncratic individuality. The difference is the same as the one between a Chinese farmer eating Chinese food because his village has done so from time immemorial and a citizen of a Western megalopolis deciding to go and have dinner at a local Chinese restaurant.

A choice is thus always a “meta-choice,” a choice that simultaneously defines and is defined by the conditions of the choice itself. It is only the woman who does not choose to wear a veil who effectively makes a choice. This is why, in our secular societies of choice, people who maintain a substantial religious belonging are in a subordinate position. Even if they are allowed to maintain their belief, this belief is “tolerated” as an idiosyncratic personal choice or opinion. The moment they present it publicly as what it is for them (a matter of substantial belonging), they are deemed “fundamentalist.”

So what does all this have to do with the recent French (and then Dutch) vote of “No” to the European Constitution? Everything. The French voters were treated exactly like the Amish youngsters. They were not given a clear symmetrical choice. The very terms of the choice privileged the “Yes” vote. The elite proposed a choice that was effectively no choice at all–people were called to ratify the inevitable, the natural result of enlightened expertise. The media and political elite presented the choice as one between knowledge and ignorance, between expertise and ideology, between post-political administration and old political passions of the left and the right. The No was thus dismissed as a short-sighted fearful reaction to the emerging new postindustrial global order, an instinct to stick to and protect the comfortable Welfare State traditions–a gesture of refusal that lacked any positive alternative program. It is little wonder that the only political parties whose official stance was No were those at the extremes of the political spectrum: Le Pen’s Front National on the right and the Communists and Trotskyists on the left. Furthermore, we’ve been told, the No was really a No to many other things: Anglo-Saxon neoliberalism, Chirac and the present French government, the influx of immigrant workers from Poland who lower the wages of the French workers, etc. (And before dismissing this last complaint as racist, one should keep in mind that this influx of immigrant workers is not the consequence of multicultural “tolerance.” It effectively is part of capital’s strategy to hold in check the demands of workers!)

However, even if there is an element of truth in all this, the very fact that the No was not sustained by a coherent alternative political vision is the strongest possible condemnation of the political and media elite, a monument to their inability to articulate and translate the people’s longings and dissatisfactions into a political vision. Instead, in their reaction to the No voters, they treated them as retarded pupils who did not get the lesson of the experts: Their self-criticism was that of the teacher who admits that he failed to properly educate his pupils.

So while the choice was not the choice between two political options, neither was it the choice between the enlightened vision of a modern Europe, ready to fit the new global order, and old confused political passions. When commentators described the No as a message of confused fear, they were wrong. The main fear was the fear that the refusal itself provoked in the new European political elite, the fear that people will no longer easily buy into their “post-political” vision. For all others, the No is a message and expression of hope–hope that Politics is still alive and possible, that the debate about what the new Europe shall and should be is still open. This is why those on the left should reject the sneering insinuation by liberals that, in our No, we found ourselves strange bedfellows with neo-Fascists. What the new populist right and the left share is precisely this: the awareness that Politics proper is still alive.

For in fact, there was a positive choice in the No: the choice of the choice itself, the rejection of the blackmail by the new elite that offered us only the choice to either confirm their expert knowledge or to display our “irrational” immaturity. The No vote is the positive decision to start a properly Political debate about what kind of Europe we really want. Late in his life, Freud asked the famous question “Was will das Weib?” (“What does Woman want?”), admitting his perplexity when faced with the enigma of feminine sexuality. Doesn’t the imbroglio with the European Constitution bear witness to the same puzzlement: Which Europe do we want?

Theodor Adorno claimed that what we are getting in the contemporary “administered world” and its “repressive desublimation” is no longer the old logic of social authority’s repression of the Id (the individual’s illicit aggressive drives). Rather, we have a perverse pact between the punitive Superego’s legally sanctioned social authority and the Id’s illicit aggressive drives at the expense of the Ego’s rationality. Today, something structurally similar is going on at the political level. We have a weird pact between postmodern global capitalism and premodern societies at the expense of modernity proper. The United States is essentially “at home” in Third World countries, exploiting them (economically and culturally) in a true relationship of symbiosis: exporting high tech products and food, importing raw materials and the products of sweatshops, flooding them with U.S. pop culture and appropriating selected “authentic” aboriginal culture and arts. It is easy for the American multiculturalist global Empire to integrate premodern local traditions. The foreign body that it cannot effectively assimilate is European modernity.

So although the French and Dutch No is not sustained by a coherent and detailed alternative vision, it at least clears the space for it. This void demands to be filled with new projects–in contrast to the pro-Constitution stance that effectively precludes thinking, presenting us with an administrative-political fait accompli. The message of this No to all of us who care for Europe is: We will not allow anonymous experts whose merchandise is sold to us in a brightly colored, liberal-multiculturalist package to prevent us from thinking. It is time for us “Europeans”–both citizens and lovers of Europe–to become aware that we have to make a properly Political decision of what we want. No enlightened administrator will do the job for us.