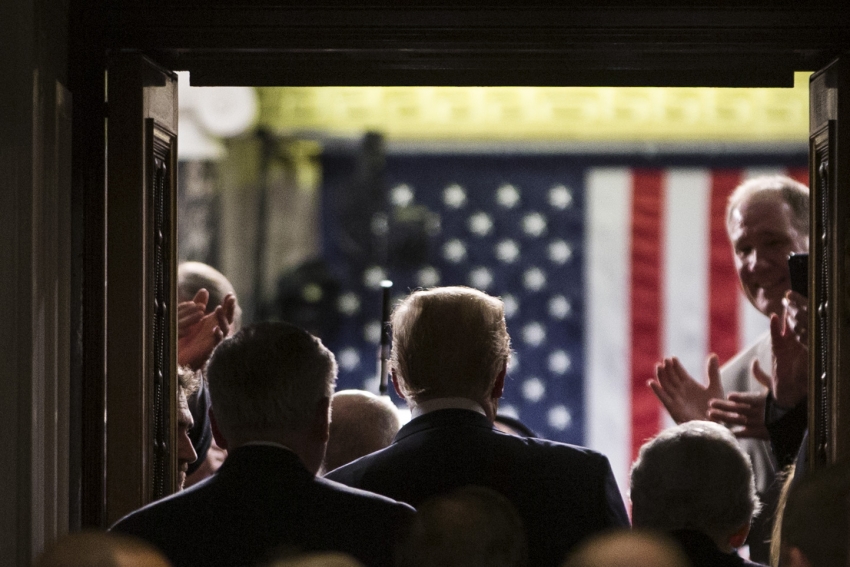 President Donald Trump arrives before delivering the State of the Union address in the chamber of the U.S. House of Representatives at the U.S. Capitol Building on February 5, 2019 in Washington, DC. (Photo by Zach Gibson/Getty Images)

Trump Is Not an Isolationist—Just Listen to His SOTU

Trump wants to expand U.S. dominance and empire—and he has little resistance in Congress.

The U.S. goal is to dominate the region through its proxies in Israel and in the pro-American governments of most states in the Middle East.

Alongside the chants of “U.S.A! U.S.A! U.S.A!” in which both Democrats and Republicans participated, President Donald Trump’s State of the Union (SOTU) address revealed a deep truth. The Trump administration is not, as a wide range of media outlets have claimed, isolationist. Rather, it is simply re-adjusting strategies for achieving and maintaining a violent U.S.-led global capitalist hegemony, which should not be mistaken for abandoning the project.

Trump repeatedly bemoaned the involvement of the United States in “foolish wars.” Yet, he also boasted of his administration’s massive increases to the military budget, which came in at $717 billion for 2018 and are slated to include another $750 billion in 2019.

He took credit for the supposedly impending withdrawal of U.S. ground forces from Syria and drawdown of U.S. troops in Afghanistan. But he bragged about exiting the Intermediate-Range Nuclear Forces Treaty (INF) that the United States signed in 1987 with then-Soviet Russia to curtail the two countries’ nuclear build-ups and reduce the risk of nuclear war. Trump said that if the United States and Russia can’t agree to a new version of the INF, possibly one that includes China, America will “outspend and out-innovate all others by far,” suggesting a willingness to re-start an arms race. While he correctly identified a war on the Korean peninsula as undesirable, evidently a nuclear confrontation with Russia doesn’t constitute a “foolish war.”

The political center of gravity of the speech showed an unwavering commitment to imperial fiat. In his SOTU, Trump reiterated his imperial decree that the president of Venezuela is parliamentarian Juan Guaidó. “Two weeks ago, the United States officially recognized the legitimate government of Venezuela, and its new interim President, Juan Guaidó. We stand with the Venezuelan people in their noble quest for freedom,” Trump said to bipartisan applause, despite the fact that 80 percent of Venezuelans had never heard of Guaidó until two weeks ago.

Trump went on to claim that the Venezuelan government’s “socialist policies have turned that nation from being the wealthiest in South America into a state of abject poverty and despair.” Yet, illegal sanctions enacted by the United States, European Union and Canada have played a critical role in Venezuela’s current crisis. These sanctions have also led to the deaths of Venezuelan citizens, according to both a United Nations special rapporteur and FUNDALATIN, a Venezuelan human rights group with special consultative status at the UN.

White House National Security Advisor John Bolton left no doubt about U.S. motives for involvement in Venezuela when he told Fox Business last month that regime change would be good for American business interests. Florida Senator Marco Rubio, one of the key players in the effort to overthrow Maduro, also cited alleged benefits to the U.S. economy as a justification for U.S. involvement.

The imperial diktats Trump issued in last night’s address didn’t end in Latin America: They extended all the way to the Middle East. He claimed his administration “has acted decisively to confront the world's leading state sponsor of terror: the radical regime in Iran,” despite the total lack of evidence for such a characterization of the Iranian government. “To ensure this corrupt dictatorship never acquires nuclear weapons,” Trump continued, “I withdrew the United States from the disastrous Iran nuclear deal.”

Trump declined to note that, according to the International Atomic Energy Agency, there was never any “credible evidence” that Iran was working on a nuclear weapons program. Democrats declined to cheer these comments, presumably because the Iran nuclear deal is generally seen as one of the Obama administration’s signature foreign policy achievements.

Trump celebrated inflicting on Iran what he called “the toughest sanctions ever imposed on a country,” measures with devastating effects on Iranian civilians. The efforts to crush Iran and Venezuela are connected. Officials in the Trump administration told The Wall Street Journal that the gambit in Venezuela is not only about U.S. efforts to remake that country but also all of Latin America, particularly the left-wing governments of Nicaragua and Cuba with whom Venezuela has partnered. The paper reports that the Trump government is worried about “[r]ecent inroads made by Russia, China and Iran” in Latin America and that “[p]art of why U.S. officials express concern about Iran’s influence in the region is that Iran is a major backer of Hezbollah, and its South American operations are a significant source of cash.”

Alongside his bluster toward supposed enemy states, Trump also boasted about his administration’s decision to move the United States’ Israeli embassy to Jerusalem and declare the city Israel’s capital—a long-time goal of the U.S. Right. That maneuver served as a key plank in the administration’s efforts to permanently smash Palestinian aspirations through what Trump calls “the ultimate deal,” a plan to isolate the Palestinians regionally—and compel them to pretend that a discontiguous, non-sovereign fraction of the West Bank constitutes a state and surrender the right of Palestinian refugees to return to their homes.

The U.S. goal is to dominate the region through its proxies in Israel and in the pro-American governments of most states in the Middle East. For that to happen, the dispossession of the Palestinians has to be normalized so that friendships between Israel and other U.S. allies in the region can deepen, a process that has been underway for years. Such a pro-U.S. regional bloc could weaken the forces American planners and their Middle Eastern partners see as obstacles, namely Iran and its allies, particularly Hezbollah. One of those pro-U.S. dictatorships, Saudi Arabia, was conspicuously absent from the SOTU as was the murderous war that the United States, Saudi Arabia and the United Arab Emirates are continuing to carry out (with Canadian and British complicity) against Yemen.

A number of the Democrats recently elected to Congress seem to see through the mainstream media’s conception of Trump’s administration as “isolationist,” and a few have pushed back on aspects of U.S. imperialism. California Rep. Ro Khanna rejected U.S. meddling in Venezuela, and Minnesota Rep. Ilhan Omar tweeted that “A US-backed coup in Venezuela is not a solution to the dire issues they face. Trump's efforts to install a far right opposition will only incite violence and further destabilize the region.” Omar and Michigan Rep. Rashida Tlaib have both been outspoken in their criticism of U.S. policy toward Israel.

However, these voices remain a minority in the Democratic caucus. House Speaker Nancy Pelosi (D-Calif.) applauded almost all of Trump’s imperial sabre-rattling during the SOTU. If the U.S. war machine is going to be reined in, the driving force will have to come from outside of Congress. It certainly won’t come from the White House.