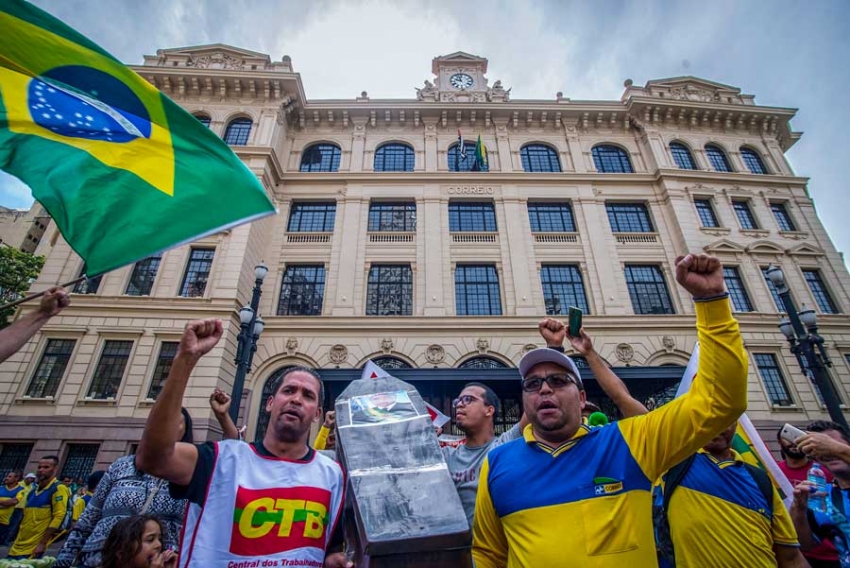 “We have to unite, or we will be carried away by a dictatorial government."

FLORIANÓPOLIS, BRAZIL—On a gray afternoon in early February, 60 local leaders from roughly 40 unions meet at the tan, seven-story headquarters of the Santa Catarina State Commerce Workers Federation to discuss how to move forward under Brazil’s new, far-right president, Jair Bolsonaro. They represent metalworkers, teachers and just about everything in between. Similar meetings have been held around the country.

Since Bolsonaro's inauguration January 1, he has unleashed an assault on workers and unions. He lowered the minimum wage (despite inflation) and closed the country’s 88-year-old Ministry of Labor. The sign was quickly taken down from the government building in Brasilia.

“There is an excess of rights,” Bolsonaro has said of labor.

At the Florianópolis meeting, behind a long table hung with red, yellow and white union banners, Anna Julia Rodrigues, state president of the country’s largest labor federation, CUT, calls for unity. “We have to unite, or we will be carried away by a dictatorial government,” she says.

Ingrid Assis, an indigenous labor leader with CSP-Conlutas, a labor federation that includes unions and grassroots movements, takes the call for unity to another level. She challenges those in the room not to forget that the country’s indigenous peoples—whose sovereignty over their land is under attack by Bolsonaro—are workers, too.

“The union movement has to embrace this struggle,” says Assis.

Both speakers are greeted with applause. But will unity be enough?

“Today we are living in the worst moment for the working class in recent history in Brazil,” Rodrigo Britto, the president of the Brasilia branch of CUT, tells In These Times. “We are returning to the 19th century.”

Workers have been fighting an uphill battle since the 2016 impeachment of Workers’ Party President Dilma Rousseff, a move that many called a congressional coup.

With Bolsonaro’s election, it got worse.

Bolsonaro is a former military captain who promised to fight corruption, violence and Brazil’s Left. He vowed to put guns into people’s hands, end activism and eliminate his political opponents.

“You have to do away with unions in Brazil ,” he told reporters.

Labor analysts believe the closure of the Ministry of Labor is a move in that direction. Former Labor Minister Manoel Dias called it a “crime.”

The Finance Ministry is now in charge of pensions, workplace oversight, health and safety, and guidelines for workers’ salaries. Under the direction of Bolsonaro’s finance minister, Paulo Guedes—one of the “Chicago Boys,” neoliberal Latin American economists who studied under Milton Friedman at the University of Chicago—it’s hard to imagine the ministry carrying out workplace inspections.

The registration of unions now falls under the jurisdiction of the Ministry of Justice, overseen by Minister Sérgio Moro, the former judge who jailed ex-president Luiz Inacío Lula da Silva on controversial evidence, blocking him from running against Bolsonaro. In January, Moro announced he would choose a Federal Police officer to oversee union registration.

Hoffmann and others fear Moro and his people may move to strip the registration of unions as a way to weaken labor organizing in the country, and in the words of Bolsonaro’s philosopher-guru Olavo de Carvalho, “break the legs” of the enemies of the government.

“Their objective is to silence those that are opposing this policy of privatizations that they are planning,” Jose Maria Rangel, the president of the United Federation of Oil Workers (FUP), told In These Times.

Shortly after his inauguration, Bolsonaro announced plans for a first round of privatizations.

“We will quickly attract initial investments worth roughly 7 billion reals, with concessions for railroads, 12 airports and 4 ports,” Bolsonaro wrote on Twitter.

His conservative predecessor Michel Temer—who came to power in 2016, with the impeachment of former president Dilma Rousseff—had already begun auctioning off state infrastructure and the private rights for oil production in Brazil’s massive off-shore oil reserves, known as Pre-Salt.

But privatizations are expected to take a much more prominent role under Bolsonaro and finance minister Guedes.

Petrobras was at the center of the country’s massive Lava Jato corruption scandal. This has been used as an excuse to push for the sell-off of the company’s assets.

During a talk in late January, Mattar said that the Brazilian government is looking to auction the majority of Petrobras’s 36 subsidiaries in less than four years.

The move would mean big money for Brazil now, but a loss of major government assets, investments, and profit, in the longterm. For oil workers it would be disastrous, with potential layoffs, outsourcing and loss of benefits.

Bolsonaro and his allies in Congress are looking to slash pension benefits and drastically increase the years of work required to earn them, in the name of staving off financial disaster.

Unions across the country have promised to do everything to stop them, including a general strike, if necessary. Brazil’s unions carried out two general strikes in 2017 against the pension and labor reforms.

Bolsonaro’s allies don’t yet have the votes they need, but they have powerful forces on their side, such as the evangelical caucus.

Unions, however, believe this is a fight workers can win.

On February 20, thousands rallied against the reform in São Paulo and 11 other cities. Thousands more protested again on March 8, International Women’s Day, and another day of rallies is planned for March 22. Unions are laying plans for more protests in the coming months: printing materials, handing out flyers and locking in dates.

On top of Bolsonaro’s move to undercut unions and workers’ rights, unemployment in Brazil remains high, at just under 12 percent, double the rate just five years ago under the Workers’ Party. Outsourcing has made the job market more precarious. Informal employment and unemployment are both expected to rise.

“This moment is really intense,” Assis tells In These Times. “We can’t trust Congress and its corrupt representatives. We have to construct alternatives and these alternatives have to come by the hands of the workers.”