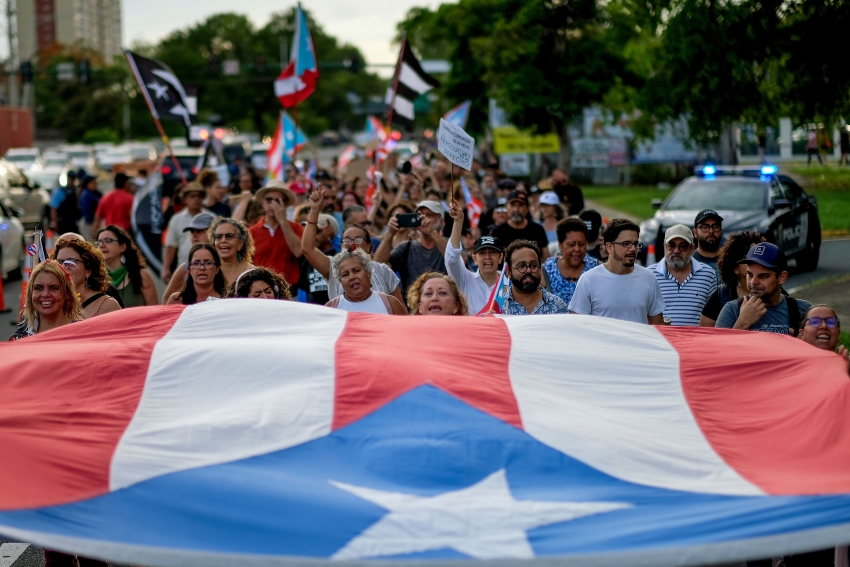 The protests in Puerto Rico helped lead to the resignation of Gov. Rosselló. (RICARDO ARDUENGO/AFP/Getty Images)

In an interview, Carla Minet, executive director of the Centro de Periodismo Investigativo, explains how her team’s work shined a light on government corruption and helped fuel mass protests.

On July 24, following nearly two weeks of massive protests, Puerto Rico’s embattled Gov. Ricardo Rosselló announced that he would resign. The shocking development followed the release of secret chats that showed Rosselló and other members of the government using sexist and homophobic language to refer to political rivals, and the mocking of victims of the deadly Hurricane Maria. It also marked the first time in Puerto Rico’s history that a governor was removed from office without an election.

The cache of secret chats was released through Puerto Rico’s Centro de Periodismo Investigativo (CPI), an organization that has long been at the forefront of battles for public information. The CPI has become a safe haven for journalists who share a commitment for government transparency or who have been pushed out of news outlets that have either eliminated or significantly downsized their investigative reporting units.

In These Times recently spoke with Carla Minet, executive director of the CPI, about the organization’s role in the protests, the importance of government transparency, and what’s next for Puerto Rico.

One of the things that led to the current uprising in Puerto Rico was an almost 900-page chat that was leaked, and that was administered by Gov. Ricardo Rosselló himself, alongside some of his top aides. Your organization, CPI, was one of the outlets that published the chats and was the first outlet to publish it in its entirety. When did you realize what you had with this leak?

CM: *Laughs* As soon as we were able to scroll down the document, I think it took, like, maybe 10 to 15 minutes to understand, you know, the implications of the documents. At that point we had seen the previous leaked pages.

I think that small leaks that have happened at points were not, they didn't have the impact of the whole document. They were like pieces that didn't communicate how deep the problem was, in terms of possible offenses, in terms of ethics and violations of not only the law but protocols and, of course, common sense.

At that point when we saw the whole document, we were really astonished. We were like, “What is this? How this has happened?” So we were in shock, let's say. And immediately we knew that we had to start working on a story and report on the patterns that we saw in the documents. We have been already investigating some of these figures who were close to the governor, so we had a lot of background on each of them. Besides the name-calling and the bullying, and the insults, all of which are important, the leaks show the character of the officials in government.

Did you expect an uprising to come out of this leak?

CM: No, never. At the point when we published the documents there had been protests because of the previous partial leaks, but we hadn’t even thought about this, to be very frank. We only thought about the importance of people knowing how their officials were behaving among these potential conflicts and these potential breaches. This is like the tip of the iceberg in terms of corruption—a very big and deep corruption scheme within the government.

How do you think this will affect the ongoing debt negotiations, which you wrote about in 2017 for In These Times?

This has affected the governance of the country at all levels. Any important officials who dealt with the fiscal control board and the negotiation process are now out of the government. And the governor is going out. And still we don't know who will replace him. So I think this will delay the processes. Will it be favorable? I don't have an answer to that. I really have no idea if this will benefit or make that process worse. Because things are very fluid and it is very difficult right now to predict where things are going.

What is the mission of the CPI moving forward?

After these revelations, we've had a very heavy process in terms of not only the workload but also the sudden recognition of our journalists, and the amount of tips we are getting. So we have our hands full right now, trying to just think—what is the best way in which we can contribute to this stage of the process that the country is going through?

We are trying to work hard, but I think the future is a little bit blurry right now. We just know that we are doing our best. We were in the right place in the right moment. We are grateful for that, because we think this has been an important process for our country.

How has investigative journalism been suppressed in other local news outlets in Puerto Rico?

There is no investigative news outlet in Puerto Rico besides the CPI. Local media does very little reporting. El Nuevo Día newspaper has developed an investigative unit, but if you see the trajectory of that unit, you'll see that they have published very few stories. They've only had like two journalists for that unit, who do also daily coverage sometimes. So it's not a real effort to do investigations. In television, there are a few efforts, but that's what we have.

In the aftermath of Hurricane Maria, the CPI engaged in a series of investigations, many of which were subject to a series of blockages from the Puerto Rican government. The center had to sue the government to gain access to public records. Can you talk to us about some of those efforts?

All those efforts have made a point in terms of public opinion about how difficult it is to get public records here, and how unfair it is that we have to go to court to get documents which are public. We've been successful in all the lawsuits. In the end, we've gotten the documents. Only one of those lawsuits is still in the appeals process. But the rest have been successful. So I think it shows that there is a culture of opacity in the government and they have a culture of denying documents for no reason.

They make us use our very few resources to go to court, sometimes for six months. It’s a waste of public money, just a waste.

Making all of this public is a way for the people to understand that we need policies and protocols or even laws that expand and enforce the right we have to public documents in the Puerto Rican Constitution.

The CPI has been incredibly successful with gaining access to this information for the public interest. How has this success served as an example for other states that may or may not have open records acts or sunshine laws, among other kinds of mechanisms by which they can gain access to information?

CM: To be fair, in the U.S. there is no constitutional right to public information as there is in Puerto Rico, so I think that puts us in a better position to go to court. But in the U.S. certainly there is a culture in terms of open government, in terms of using technology, that is not so well developed in Puerto Rico. And even this [Rosselló ] administration that came to power with the promise of open government and transparency definitely has done nothing in that matter.

Fernando Tormos-Aponte is a Scholars Strategy Network postdoctoral fellow at the University of Missouri–St Louis. He is from San Juan, Puerto Rico.