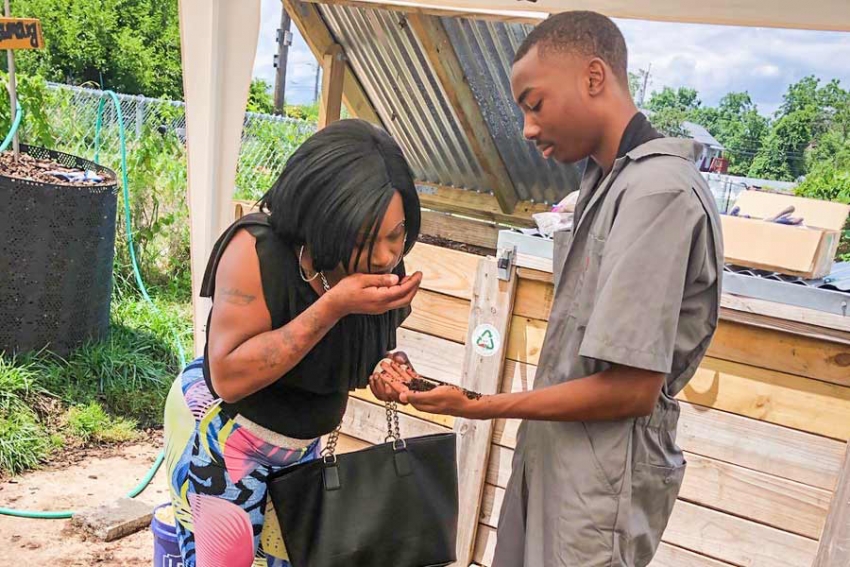 BALTIMORE—In a sunny hilltop pasture just five blocks above the sprawl of the CSX railyard and the dusty black mounds of the Curtis Bay Coal Pier, 16-year-old Kenny Moss dips his hand into a wood-frame compost bin.

“Feel how hot it is,” he says, extending a palmful of “black gold” toward fellow urban gardener Precious Fraling, 41, who’s here to learn about composting for her own community garden in the Govans neighborhood, 13 miles north.

Moss is a youth composter at Baltimore Compost Collective, a nonprofit founded in 2017 and based at the Filbert Street Community Garden in industrial South Baltimore. On this verdant acre with roaming ducks and chickens and dozens of vegetable beds, neighbors grow their own food in what is otherwise a food desert; there’s no supermarket within walking distance of the surrounding Curtis Bay or Brooklyn neighborhoods. They sell their surplus produce through the Farm Alliance of Baltimore City at a weekly farmers market.

The Collective gathers about 400 pounds of organic material a week from around 70 customers, who pay $5 for the weekly pick-up. The compost is then used to enhance Filbert Street’s soil.

“We’re diverting about eight tons of Baltimore city food scraps every year,” says Moss. “It was going to the BRESCO incinerator or the landfill.”

“Every time we go and pick up [compost material], we see the incinerator,” says Moss, speaking of Wheelabrator’s iconic white smokestack just across the Middle Branch of the Patapsco River, near neighborhoods where many of the Collective’s customers live. “A lot of people talk about how their family members have asthma or they have asthma, and how they’re really suffering from it.”

Baltimore has some of the most poisonous air in the United States. A 2013 study found that out of over 5,000 U.S. cities, Baltimore had the highest emissions-related mortality rate (130 out of every 100,000 residents). Baltimore’s rate of asthma-related hospitalizations was almost three times the U.S. average in 2010, and Curtis Bay’s 21226 ZIP code currently leads the nation in point-source air emissions. Eastside traffic on Interstates 695 and 895 flanks Brooklyn and Curtis Bay. These neighborhoods are also the nearest to coal-fired energy plants, waste facilities and recycling yards in the riverfront industrial zones Wagner’s Point and Hawkins Point.

The Collective aims to curb that pollution by reducing what’s going to the incinerator and landfill. “Burning trash causes people to have cancer and asthma,” says the Collective’s program manager, Marvin Hayes, 46. Composting food waste (rather than burying it under other layers of trash) exposes it to oxygen, preventing methane generation and reducing incineration particles that affect breathing while replenishing soil. In other words, composting can help keep the air cleaner.

Wheelabrator filed suit against Baltimore in April over the Baltimore Clean Air Act (passed by the City Council in February), which enacted strict emissions limits; over the past two decades, the industry saw at least 31 incinerators close due to issues such as insufficient revenue or the inability to afford required upgrades. The city’s landfill is 82% full and on track to reach capacity in 2026, and officials are still developing a plan for what to do with the trash if the incinerator doesn’t burn it.

Composting can’t fix all of Baltimore’s pollution, but the Collective is an incubator for what’s possible. Ava Richardson, a doctoral candidate at Johns Hopkins and Baltimore’s Food Matters technical advisor, calls it a “replicable model” and a “vehicle for youth workforce development.”

Hayes is training Moss to take over as Filbert Street site manager so that Hayes can work on expanding the Collective’s composting to other neighborhoods and perhaps to more of Baltimore’s roughly two dozen urban farms, as well as community gardens. He also wants to add a third, larger composting system to the pair of three-bin systems currently at Filbert Street.

What Hayes wants most is to pressure the city to adopt curbside composting, like San Francisco, New York and Portland, Ore., with a large-scale composting facility that he and others could use.

“The city is getting compost fever, and we are the virus that is spreading compost fever throughout Baltimore,” Hayes says. “I’ll continue to fight until we’re zero-waste. I’m hoping that will be my legacy.”

Right now, only about 28% of Baltimore’s waste is recycled (including composting), below the national average of 35%. Local advocates say Baltimore could recycle 50% of its waste and compost another 30% to divert more than 80% from landfills and incinerators overall.

Moss says the Collective isn’t just a job, but an “opportunity.” In the meantime, he’s also working on his own idea for an environmental justice-themed video game, tentatively titled, Destroy the Incinerator.

The Institute for Journalism and Natural Resources supported this story with an Environmental Justice Reporting Award.